I am starting this series at a time when travel is something that is last on the mind of most people. As luck would have it our spring trip to Amsterdam and Belgium with parents had to be abandoned due to obvious reasons. Though I didn’t lose much money in the whole exercise it was a trip that my parents were looking forward to. As elective work in my profession took a back seat I decided to scour through my box of SD cards and arrange photos from my early days of travel and photography ( When I didn’t even think I would be having a blog with 125 posts for the same!).

This is the tenth year of our travels together as a couple and I thought it was an appropriate time ( Since I had a lot of it free!) to start writing about our first trip together – Our honeymoon to Tanzania!

Tanzania may seem like a strange place for a honeymoon to most people. With a mid November wedding after looking at the choices and after consulting the better half I snuck in my dream trip to the Serengeti. We were not big on overseas travels in those days and frankly didn’t have the resources for it either. But for me it was the culmination of years and years of being an animal lover. Starting from being an aspiring zoo keeper in childhood and being able to recognise most if not all the common animals in primary school days to being a regular on the Indian Safari circuit thanks to our biannual family trips, it was a passion that had only grown and grown. Even my first trip abroad was to the parks in Kenya including the fabled Masai Mara after my residency exams, but still like any animal lover knows the Serengeti is like the Holy grail. So I convinced the better half and went ahead and planned a honeymoon to the parks of Northern Tanzania – Lake Manyara NP, The Serengeti and the Ngorongoro crater.

As this trip is nearly ten years old and I didn’t have a blog post on my mind in those days this post is written mostly from the memories that I have of those individual parks. We flew into Arusha which is the airport in Tanzania that caters to the Northern parks circuit via a stop over in Nairobi. We were picked up at the airport by a representative of the Leopard tours company that we had booked the tour through. We were taken to the office in Arusha where we were explained about the tour and introduced to our driver and guide for the trip, Hadji Mbuguni – A cheerful pro who had been doing this for decades.

After shifting our luggage to the vehicle that we were alloted, a comfortable converted pop top Landcruiser we set out for our first park on the itinerary, the lake Manyara National Park. The park is a short 2 hour ride from Arusha along surprisingly comfortable roads. We were travelling in what is known as the short rainy season in Tanzania. There were dark clouds intermittently on our way. When I expressed my concerns about the weather to Hadji he said something that I remember to this day – the rains don’t matter, the animals have nowhere else to go!

We reached our hotel the Serena Lake Manyara Lodge overlooking the lake and the park around it. The views from our cottage were superb and worthy of a picture postcard.

It was a perfect place to take a portrait of the better half who gladly obliged. We also started a series of taking SLR Selfies in our hotel room which we continue to this very day – The gear has improved from a kit lens to an ultra wide but the principle remains the same.

That night after a sumptuous dinner we went on a guided night safari with an armed ranger in tow. Those were my initial days of handling a basic SLR and the 300mm was 3 years in the future. So even though we were lucky enough to spot a bush baby on a tree, my gear was far too basic and skills far too inadequate to get any sort of a photo. I even remember seeing a usually lazing during the day hippo run faster than a car at night but sadly no photos. For a first night safari it was a memory that is still fresh in my mind a decade later.

We returned to the hotel and slept peacefully to wake up to a lake with overcast skies. It wasn’t pouring just as of yet but it looked like it would at any moment. We went and had our breakfast at the main restaurant and waited for our only day safari at the lake to begin. Now with a decade of experience more I would have done at least 2 nights at a place but back then I had neither that knowledge nor the money to extend this trip. So one morning safari it was! Hadji was ready for us and we set off for our first daytime safari into a Tanzanian Park.

Lake Manyara is a low key wildlife destination when it comes to Tanzanian parks. But it had its own charm and a much less number of vehicles as compared to the Serengeti later on. As we moved around slowly inside the park we came across a solitary Impala. Usually present in huge herds this solitary animal was an aberration.

We then came across a young Elephant enjoying its rest in the scrub just by the road. We waited for it to move but it was too comfortable and in no mood to oblige. So I just took a photo and moved on.

When you think of monkeys in an Indian jungle the first thought that comes to your mind is the naughty red faced rhesus macaque that will steal anything hanging from your person at a moments notice. So I was surprised to see the monkeys in Manyara being shy. When I asked Hadji he said the role of terrorising humans here was exclusively taken over by the Baboons, whereas the blue monkeys and vervet monkeys were skittish and afraid of people.

While the animal life of Africa is quite well known what is underrated is the variety and the striking colours of the birds here. One of the groups of birds that especially stayed with me are the Guinea Fowls. There are a lot of subspecies of Guinea Fowl all over Africa and each of them has its own unique head to go along with a spotted feathered body. In Manyara we saw two types of Guinea Fowls, the helmeted guinea fowl who literally had a horn growing out of the top of its head & the guinea fowl that looked like it had just stepped out of a hair dressing salon, the crested guinea fowl.

The other group of birds that have always fascinated me are the hornbills with their huge beaks. At Manyara we spotted two types of these birds the silver cheeked hornbill and the unique Ground Hornbill that spends most of its time walking and foraging the grasslands. (In all fairness the quality of these photos irritates the hell out of me now, hope to get a chance to do better sooner rather than later!)

We also approached the famous hippo pools at Lake Manyara NP where you can alight from your car and walk across a rickety boardwalk some distance into the mud pools below filled with hippos. It was also not a good thing that I knew that hippos were one of the most dangerous animals and could easily tear a human into two.

Before we went on the board walk Hadji pointed at something lying on the dry mud below the huge pilons. It was a Nile Monitor Lizard lying motionless and well camouflaged. It was afternoon and there was no chance of the lizard moving from the shade so we took a few photos and gingerly went up the boardwalk with a prayer on our lips.

The pools were still far from full as the short rains were just starting so the actual water was some distance away and obviously so were the hippos. So it was a strange mix of relief and disappointment that there weren’t any hippos right below our feet!

Hadji stopped us and pointed to something on the tree in the mud flats. With all our interest in the animals below we had totally missed two African Fish eagles with their beautiful white heads sitting right there in front of us, albeit a bit obscured by the branches. There was no way to get around and get a clearer photo but if not for Hadji we would have totally missed spotting them.

After I got the best angle of the eagles I turned my attention back to the pools. I have never seen more Grey and Purple herons at one spot than I saw that day in the Hippo pools at Manyara. The birder in me was thrilled to bits to see so many fit in one shot.

Then there were the main stars of the show, the animals after whom the pools were named – The Hippo. Most were lying almost motionless except for the flutter of a ear or the flicking of a tail. There were also the ubiquitous oxpeckers, birds feeding off the ticks on the backs of these huge beasts.

Then suddenly one hippo got up seemingly uncomfortable at his position and I got what I wanted, a photo of a hippo not looking like a rock!

After looking around the pools for some time we then went back to our car from the boardwalk. It had been a great morning which got even better when we spotted a pair of birds that had been a childhood favourite of mine, the Crowned Crane. A pair was just strutting around the grasslands feeding and we were the only vehicle around. I asked Hadji to stop the vehicle for some time and we just enjoyed watching these elegant birds feed, taking a photo once in a while when the opportunity arose. 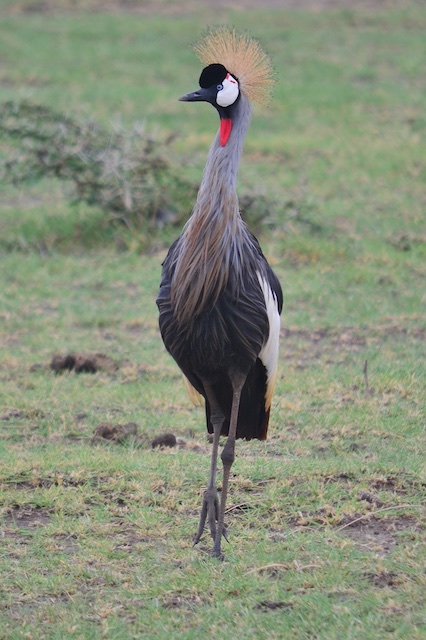 When the cranes moved off into the distance we moved on till we came to a small family of Impalas with a cute baby impala in tow. The baby was kind enough to pose for a second before running back in between his parents who walked off into the bush.

We also spotted a Giraffe in the distance and even though Hadji said we were sure to see a lot of them much closer later on, I asked him to stop so that I took at least a few photos. With wild animals you can never be very sure.

We then stopped at clearing at the edge of the park where we could disembark. Hadji was then kind enough to take photos of us with the lake and a group of Cape buffaloes in the background.

That was the end of our safari in Lake Manyara and we returned to the Hotel for collecting our packed lunch and checking out. By the time we reached the hotel the skies were totally overcast and looking very ominous. The gods had been kind enough to allow us a dry safari at Lake Manyara.

We then bid the Lake Manyara goodbye and started on our journey towards the Serengeti National Park which would take 3-4 hours. It was a short and sweet stay and has stayed fresh in my memory even 10 years down the line.

Next was the famous Serengeti National Park where we had 3 days and I was excited at the prospect of finally being there. Would it live up to the hype that I had created in my mind is the topic for another post, some other time, some day.