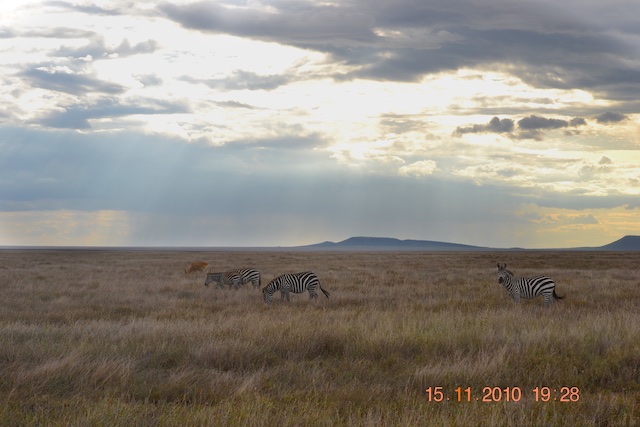 As this pandemic and the resultant lockdown seems to be in no mood to end, it gives me enough time to write more blog posts about my trips that preceded the start of the blog. It is a good distraction at a time when there seems to be no other news on offer. Hopefully it all ends soon and we can all move around safely in the world.

This post is the continuation of a series describing our travels to the Northern Parks of Tanzania in late 2010. We had started in the low key Lake Manyara National park which had been a great introduction to the wildlife of the region.(Memoirs of Tanzania, Part 1 – Lake Manyara National Park) But now we were moving to the star attraction of the whole trip, the endless wildlife filled plains of the Serengeti National Park.

We had left the Serena Lake Manyara lodge with overcast skies above but thankfully we didn’t get any rain. The weather seemed to get better as we moved away from the Rift valley and towards the Serengeti. There were still clouds in the sky but they were not the ones that threatened to burst down on us at a moments notice. I was surprised at the good quality of roads in this part of Tanzania and Hadji told us that since wildlife tourism is one of the main sources of income in this part of the World they have maintained the roads to attract more foreign tourists, and that outside this tourist zone the roads were almost non-existent.

As we were moving towards the Serengeti I saw a brightly coloured bird and asked Hadji to stop to take photos. He obliged while telling me that these were the very common but aptly named Superb Starlings & that most of them were used to human presence and came very close to humans if you offered to feed them. In other words they were the pigeons of the Serengeti!

We realised how true this was when we stopped at the checkpoint before entering the Serengeti. There were a few other vehicles that were also halted there and there were a group of Superb starlings at the feet of a tourist sitting near her vehicle looking expectantly to get some treats!

As we stood there looking on in amazement a few hopped towards me and got so close that they were closer than my lens could focus and I had to actually step away from a bird for a change to get a photo!

As we were being entertained by the Starlings we heard some tourists pointing excitedly towards something across the road. We went to see what the excitement was all about while Hadji was doing the paperwork for us. It was a pair of Masai Giraffe, enjoying their meal unperturbed by all the humans staring and pointing at them.

Then the Giraffe decided that we should get a closer look and crossed the road and moved just in front of the nominal fence that marked the park boundaries. I could almost hear Hadji smiling and telling me, didn’t I tell you we would be seeing them closer.

I am the last person to want a photograph clicked at a board that describes the location. But being at the Serengeti was a childhood dream & I happily stood at a board that proved that I was actually there.

With all formalities done we moved inside the Serengeti National Park. Any amount of documentaries seen on National Geographic can’t prepare you for the sight of what endless grasslands look like! The Serengeti is named after the Masai word that approximately means – Where the land runs on forever, and once you see it you know how apt the name is. Grasslands as far as the eye can see, dotted with Zebras, Wildebeest and other wildlife and accentuated by the beautiful skies that day, it just took our breath away.

We were staying at the Serena Serengeti Lodge inside the park and were going to do a Safari on the way till light permitted. The Serengeti in addition to the huge herds of Zebras and Wildebeest is known for its high density of predators. Where there is prey, the predators will obviously follow. That evening we were lucky enough to see a few predators before the day ended.

First we came across a lone Hyena that was running right in the middle of the dirt road. Hadji slowed down the car and let it continue its merry run, in the wild the animals always have the right of the way. It continued to run in front of us for some distance before deciding to let the pesky humans pass by.

While most think of Hyenas as scavengers they are also highly effective hunters. They move around and hunt mostly at night and this guy was just looking for a good spot to rest and let the rest of the daylight hours pass by. He finally found a good spot and we decided to let him enjoy his rest and left after few photos.

Next we came across a leopard resting on a huge tree branch. It was the first big cat that we saw in the Serengeti. Leopards usually take safe refuge on trees and even drag their kill up the tree to prevent it from being snatched by other predators. While this guy had no kill up the tree, he certainly looked to be enjoying a peaceful sleep. As anyone who has been on a safari anywhere will tell you animals are the most finicky posers. We waited for this guy to turn his head towards us for a good 20 – 30 minutes with no luck. So we decided not to bother him any more and left him to complete his sleep in peace.

What came next was the sighting of the day & what the Serengeti is most well known for – A big pride of Lions. These kings of the grassland unlike the hyena and leopard were sleeping right at the side of the track with some of the members even lying on the road itself.

A pride of lion usually consists of multiple females with their cubs and a male, this one was no different. The male who usually does no hunting on his own but rather does the job of protecting the pride from other threats was lying right at the side of the road, least bothered at the huge land cruiser a few feet from him.

The animals who provide entertainment among the pride are the cubs. Like all baby animals they have all the energy in the world and are playful at times when the adults are in the mood to sleep. A pride usually has cubs at different stages of growth and the youngest two were the ones keeping us smiling. Biting each other playfully was a practice for when they have to do it for real as adults. One of the two had enough and wanted to leave but the other was having none of it.

The females and the older cubs who do most of the hunting in the pride looked to be tired from the days activities& were in no mood for any activity. They were resting on the other side of the road from the male. Both the cubs and the mothers had an eye out for each other though and even though they seemed to be sleeping any noise and the mom would open her eyes and look where the kids were.

Even the naughty cubs finally decided that enough activity was done for the day and settled down for a siesta, albeit still warily looking at the vehicles looking on at them.

We got an example of how alert a female lioness can be when another vehicle rather noisily approached the pride and a female quickly sat up and looked to see if was anything that would be bothersome to the family.

We then decided to leave the pride to complete their rest and moved on towards the lodge. The light was getting poorer now and that would usually mean keeping the camera away but here in the Serengeti the wildlife is so abundant and so close to the road that I continued to click away at the animals close by till we were almost at the hotel.

One unexpected pleasant surprise was an African Hare sitting right on the Road. These are very skittish animals and run away at the slightest provocation. Luckily for us Hadji had spotted it from far away and had slowed down to a crawl. He told me to take a photo right there as the animal would bolt any second. So I did. I just got off two shots before the Hare bolted into the grass on the other side of the road. So the lesson of the story is always listen to your guide when on Safari!

From the smallest of the mammals we came to the largest of the African Mammals – The African Elephant. We came across a small herd and saw the lead animal with a dark fluid coming down it’s face. We assumed that the animal was hurt, but Hadji told us that it was secretions from the temporal glands that are modified sweat glands in Elephants. You keep on learning something new when you are with a good guide in the wild.

That was the last of our sightings as we came upon the rounded cottages of the Serena Serengeti Lodge. We stopped once before going in just to admire the beautiful colours of the sky above at dusk. The only time I have seen more colourful skies than this would be at the Kgalagadi trans frontier park a few years later. There is something special about the skies above the African Parks that I haven’t seen anywhere else in the world till now.

We checked into the lodge and were allowed a cottage with a balcony that overlooked the plains. It had been a long day which had started out in Manyara and ended in the Serengeti with lots of good sightings. We freshened up and rested for a while before it was dinner time and we hogged on the amazing range of food that an African Safari lodge has to offer. Sadly (or maybe not!)those were the days when we just used to eat the food and not click photos of what we ate, so you have to take my word for it.

We were too tired and haggard looking for the traditional room selfie that day. So we went off to sleep and decided to put off the photo for the next morning. As we got ready at dawn the next morning the beautiful skies made us decide to take the photo there instead of in the room itself.

It certainly wouldn’t disappoint but that is topic for another post some other time, some other day.