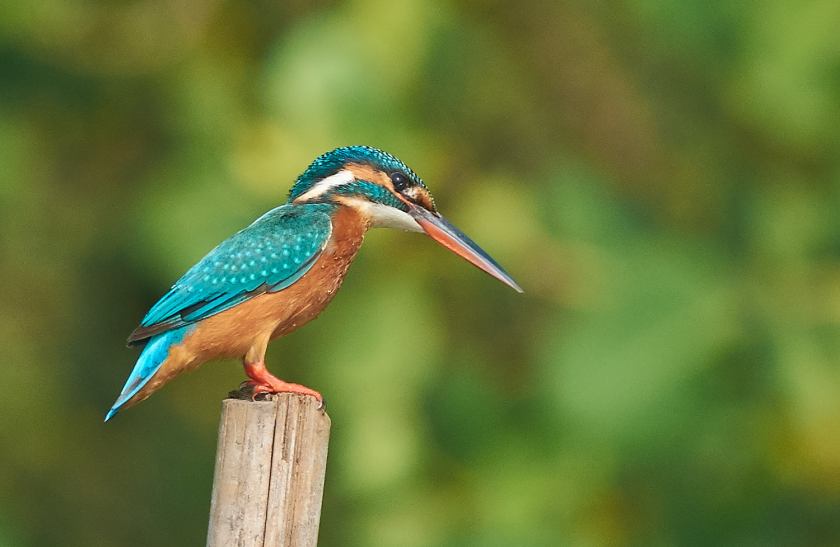 This post is the concluding post of a series documenting my travels to the forests of Goa in January 2020. As everyone knows I am writing this post in the middle of the most severe pandemics to affect the Earth in the recent past. Travelling now seems like a luxury of the distant past at times like these when most of the world is cooped up indoors. I was in a quandary whether to write a travel blog in times like these. I finally decided that it would be a good distraction for me to write it & take my mind off the crazy world events.

We woke up on our last morning in Goa before dawn (as was the norm for this trip) and got ready for our last birding activity of this trip. We were going to do a boat ride in the mangroves along the Zuari river and try to see as many aquatic birds as possible. During my research the boat ride had gotten my attention since there was a chance of spotting a few different types of kingfishers. Apart from the White Breasted Kingfisher seen almost all over India there was a chance to spot the black capped Kingfisher, Collared Kingfisher, Stork Billed Kingfisher & my favourite and the inappropriately named Common Kingfisher. This excited me a lot as kingfishers are the most striking birds and a pleasure to photograph.

As usual our guide Ramesh was present at the restaurant area when we reached there with our luggage in tow. We had already cleared our dues with the resort the previous evening and were checking out so that we could return to Mumbai directly after the boat ride. Ramesh got our breakfast packed that we would have after the boat ride was over. We got our luggage all set in our car and then bade goodbye to the Natures Nest and set off for the Cortalim jetty from where our boat ride would start.

After a 45 minute ride to the smooth roads of Goa we were at the Jetty where the boat was ready for us. All 5 of us boarded the boat without incident after walking gingerly across the slippery slime covered jetty slope and took our spots, the photographers at the front and the rest behind. Soon we were off and into the Zuari which is a pretty wide river. I was sure that we would be branching off into the smaller tributaries as there was almost no chance of spotting anything on the main busy river.

I was right. We moved right across the river to the opposite shore where I could see thin rivulets lined by mangroves joining into the main river. This was where all the action would be. We got our gear ready and took off a few test shots to see if we had gotten all the settings right. We were just in time, sitting there on the opposite bank was a striated heron. Though a very common bird in these parts we were seeing it for the first time and it got its due attention.

After we were satisfied with our patient first subject we moved on and soon Ramesh was pointing to something high up in the trees. It was a couple of Orange Breasted Green pigeon. Inspite of the fact that they were too high and out of range for good photos we couldn’t ignore a new species altogether. Thankfully we had some good light and could get some half decent photos of these beautiful pigeon.

We they proceeded forward along the far bank and waiting next for us along the bank was a beautiful western reef egret. A slaty grey cousin of the common egrets, this bird made for some pretty photos. It posed nicely for us and waited patiently for us to leave to resume its fishing activities.

Our expert boatmen soon negotiated their way past the set nets. Here there were plenty of common aquatic birds like the pond heron and the seagulls lining the finishing nets and along the muddy banks. The light is usually perfect at this time of the day so I couldn’t resist taking more photos of these birds.

We were going peacefully along when suddenly the boat driver told Ramesh to train his binoculars on something relatively far off in the distance. Soon we were rushing along at full speed towards the bush that the boat driver had pointed at. Ramesh told us that it was a black capped kingfisher, that the driver had spotted this relatively small bird without any magnification at such a distance showed his expertise.

We didn’t have to ask him to slow down when we got close to the bird. This was a very professional set up, perfectly set for bird photography. After we reached a certain distance we went forward at minimum speed, stopped at intervals and moved forward again till we were as close as the kingfisher would be comfortable with. There was our first kingfisher of the day, a brightly coloured black capped kingfisher. All 3 of our cameras went off like gatling guns and we got some pretty good photos of this beautiful little bird.

Soon the kingfisher got tired of all the prying eyes and flew off deeper into the mangroves giving us a chance to practice our flight photography. Happy with the start of this ride we moved on hoping there would be more waiting for us.

As we moved further into the mangroves and sitting periodically on the top of the trees were the most common raptors of the region, the Brahminy Kites. These birds have a striking white head and I have always wanted to take good photos of these birds from close quarters. Today would be that day.

We were busy with the kites when the driver got excited and started pointing again. We told him that he didn’t need our permission to race along if he spotted something rare. With a smile he raced the boat onwards towards his intended target. This time it was a collared kingfisher, a bird I was hoping to see eagerly on this boat ride, I had seen most other species of kingfishers seen in India except this one. This surely was a trip that struck off many species from my list!

The bird was sitting in perfect light with the sunlight glistening off its pure white breast feathers. It posed like a perfect model showing off its pretty feathers from all angles.

When that collared kingfisher flew off the driver pointed a little distance ahead. We couldn’t believe our luck, it was another Collared kingfisher! This one was sitting totally in the open without any branches intervening and gave us some more pretty shots of this bird. By now I had a huge grin permanently etched on my face.

We moved onwards into the smaller tributary and there were striated herons on the banks fishing. With such perfect light it was impossible to move on without clicking a few photos.

There was a common kingfisher with a catch sitting on a perch in the distance but Ramesh insisted that we would see more of them closer. So we took photos from a distance and left the bird to enjoy its catch in peace.

Ramesh had spotted a stork billed kingfisher (which was the reason for avoiding the common kingfisher) and we went in the direction where he had seen it go. Unluckily for us the stork billed kingfisher was in no mood to pose and it flew straight over us and off into the distance before we had the chance to focus our cameras on it. Well, there is always next time!

As we were ruing the missed opportunity we spotted two yellow footed green pigeon in the trees above. The disappointment was forgotten as we took photos of the multicoloured pigeon on display.

Sitting regally on a tree close by totally unnoticed by us was another magnificent Brahminy Kite. Posing away to glory with a beautiful catch light in its eyes. This was the best photo of this raptor that I could hope for.

As if compensation from nature for the impatient Stork billed Kingfisher there was a small minivet sitting on a nearby tree, not really a water bird but we were not complaining. We took photos of this bright red bird in good light, usually impossible in forests where these birds are usually spotted.

With that triad of great sightings back to back the grin was back on our face. It was now time to turn around and start back for our journey back to the jetty. The helper on the boat served us a delicious vegetable pattice and a bottle of water. We gulped it down in no time before returning to the main item on the agenda – taking more bird photos. We spotted one more each of black capped and collared kingfishers but they were deep in the shade and with the great sighting we had earlier we just enjoyed these ones with our eyes and didn’t attempt too many photos.

As the sun shone brightly the waders and cormorants were in full force. We took photos of these otherwise common birds with as much gusto as we had of the kingfishers.

We were almost back in the main river when I spotted a Common Kingfisher sitting on a perch. We hadn’t gotten any good photos of the Common Kingfisher and I requested the boatman to turn towards the bird. He gleefully agreed, no questions asked, no cribbing about time.

I was glad that he did. This was the sighting and the photos I would remember this trip by. The blue and orange bird shining in the sunlight, no obstructing branches in between, perfect catchlight in its eyes – the ideal sight for a bird photographer. I hope to have one of these photos printed, framed and on my wall some day.

With that sighting my grin was now extending from ear to ear. With that grin firmly on my face we then returned to the jetty and got off the boat as gingerly as we had gotten on. We thanked the boatman and his helper profusely for their amazing show of birding knowledge and boating acumen.

That brought us to the end of an amazing birding trip. We took a by now customary selfie of the entire group with our guide Ramesh , without whom this trip wouldn’t have been as good. He had been enthusiastic, punctual and gave it his all to show us as much as he could.

We then drove back the same way & dropped off Ramesh at the Mollem junction where a vehicle from Natures Nest was waiting to pick him up. I told him that I would certainly be back some day and hoped to go birding with him again.

We then drove our way back to Mumbai where normal life and work awaited. It had been a short but wonderful trip to the forests of Goa. We had gone to Goa for 3 days without ever setting foot on one of its many beaches. But we hadn’t gone there to sunbathe or indulge in watersports, we had gone to enjoy its underrated and plentiful birdlife, and we had certainly enjoyed it to the fullest!

When this trip was over we had no idea that a pandemic would be putting paid to our travel plans to the Netherlands in the spring. So this might be the last new trip series that I write in quite some time. Hopefully all of this passes soon and we can all enjoy our travels with renewed vigour.