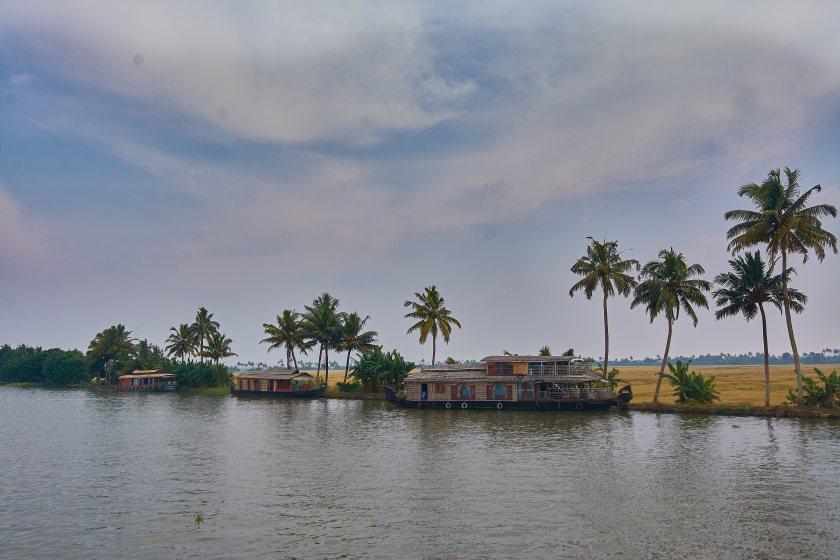 Vacations for us are usually strenuous times, consisting of walking an average of 10 kilometres a day. So this time for our anniversary we decided to give ourselves a break.

We usually book and plan our vacations months in advance. So when the national conference of plastic surgeons of India was scheduled to be held in Kochi, we decided to add on a short vacation before my conference began. It was an added bonus that the dates coincided with our wedding anniversary.

The better half was keen on staying in a house boat on the backwaters of Alleppey, I wasn’t so sold on the idea. So the better half took it on herself to find a great houseboat with an upper viewing deck and didn’t stop till she had actually booked one.

We reached Kochi the day before and stayed at a decent hotel close to the bus station since the plan was to take a bus to Alleppey early next morning. We woke up early, had a great breakfast and reached the Ernakulam bus depot from where there are regular buses to Alleppey.

The bus zoomed through the highway at breakneck speed and reached Alleppey bus depot in an hour and a half. From there we took an auto to the boarding point of the houseboat where we were greeted by the staff and shown around the houseboat. It was much larger and much cleaner than I expected and the upper deck was huge!

We dumped the luggage in our room, took out the camera and went straight away to the upper deck as the houseboat started its cruise in the backwaters. I had been a bit concerned about the weather when we started from Mumbai, as the leading weather sites showed rains. But to my immense relief it was sunny with no grey cloud in sight.

Kochi as a city had become dirtier and smellier since my last visit so I was also concerned about my nostrils being assaulted on the backwaters. Thankfully the backwaters at Alleppey didn’t have the over bearing stench of the ones in Kochi. Even though mass tourism has made the backwaters dirtier than what they were a decade ago it’s still a beautiful place. Hopefully the authorities wake up before the whole thing becomes a smelly swamp.

As we sat on the upper deck I noticed river terns & gulls fishing with the aid of the draft created by the passing of a boat. It’s amazing how creatures adapt to the environment. So I put on the 300mm and took a few photos of these common but beautiful birds. 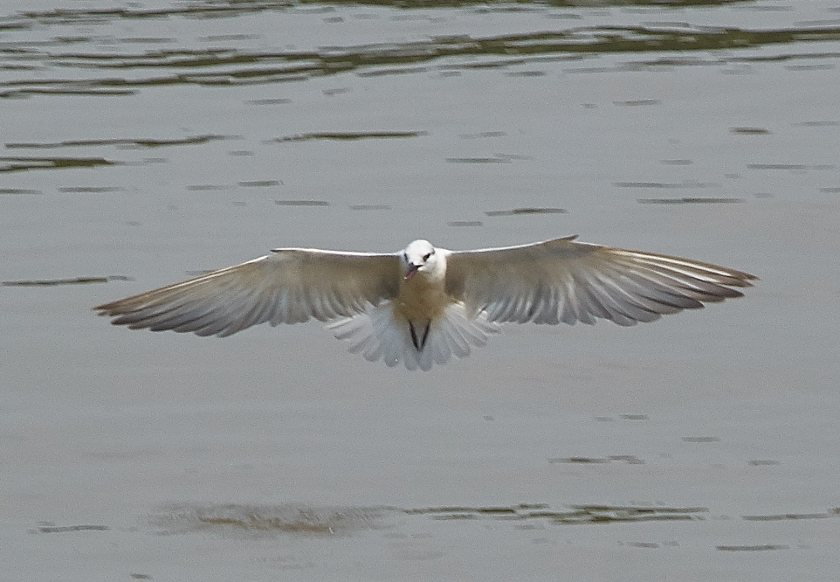 There were also blue tailed bee eaters running sorties along the banks and even though they were quite a distance away I don’t ignore beautiful birds totally. So I took a few photos as the boat passed by.

The backwaters are a serene place with lines of coconut trees, blue skies and placid waters. Even though there are a lot of houseboats in the waters these days the beauty still shines through all the commercialism.

In addition to the houseboats there are also boats which ferry people from one town to the other and boats which can be hired to cruise the waters for a few hours. All this makes the backwaters a crowded place at the height of the day. So after some time I decided to put on the 300mm to see what sort of birds I could find.

Common water birds like the Egrets and Pond herons were omnipresent along the shores, and on every other stump protruding through the water you could see a cormorant drying off its wings after a dive.

In the waterlogged fields just beyond the main canals where they couldn’t be bothered by the plentiful boats were waders like open billed storks, sand pipers, black winged stilts and black headed ibises.

Soon it was lunch time and our boat driver docked in a quiet canal and we were served a sumptuous lunch which included fresh fried fish from the back waters, Sambar, 2 different vegetables, curd, poppadoms and a mountain of rice.

After pigging out we just relaxed in the gallery above and just took in the views for a few hours. The houseboat cruised through the placid waters with a photo opportunity at every turn. I was certainly super glad that the better half had booked this houseboat that gave me the chance to photograph the backwaters in different lights.

As the bright afternoon sun started giving way to the fading light of evening I put on the 300mm again knowing that the birds would be active again. But the first photo I took after changing lenses was not a bird but a dog walking along a thin bund chasing something in the foliage.

Soon we were served piping hot onion pakoras and coffee on the viewing gallery. Beautiful locale, birds, good weather, hot coffee and pakoras & the better half for company, Bliss!

Soon the light started to fade and I put on the ultra wide to take a few photos of the sun setting over the back waters.

Since we had both had a strenuous week before departing for our vacation we promptly fell asleep after we docked only to be woken up after 2 hours for our dinner. So we freshened up and had another gluttonous fest of Kerala cuisine but with the added bonus of Chapatis!  After dinner we retired for the night and had a peaceful night’s sleep.

I woke up early the next morning and ventured out of the room. The staff who had seen my interest in photography showed me that the sun was just rising and would make for a beautiful photo. So I got out the camera and captured the sunrise.

Since we were not due to leave for the morning cruise for some time I decided to venture out on the path just adjacent to the canals to see if I could find some birds.

Just outside the boat I found a pair of playful lesser flame backed woodpeckers & they gave me full entertainment for a good 10-15 minutes dancing amidst the palm trees. 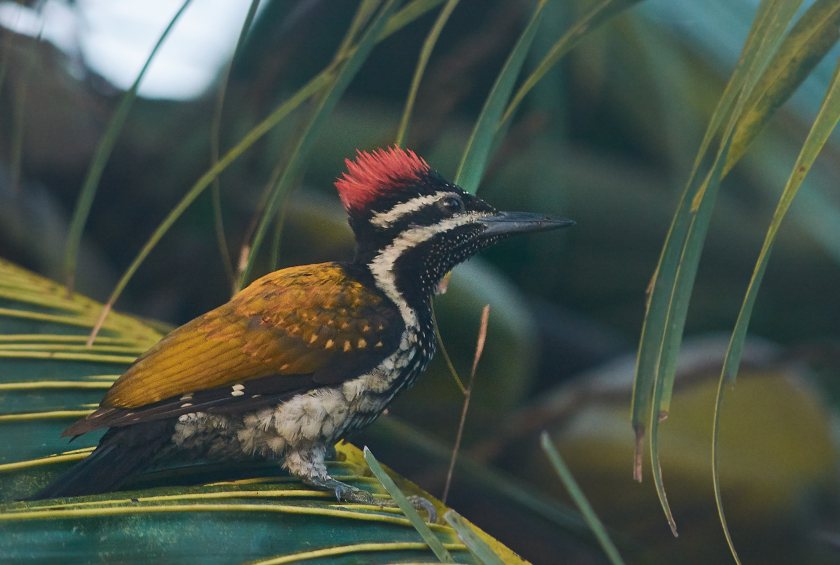 A little farther along the path was a Coucal sitting in the open and I got a good shot before he scampered away into the foliage.

Far above on the wires on top were ashy wood swallows and scaly breasted munias, too far away for a good photo but I took a few nonetheless.

Soon it was time for breakfast and the morning cruise so I returned to the houseboat fully satisfied at the morning walk! Breakfast was Appams with Sambar and freshly cut pineapple with coffee a filling start to the day.

Soon we started on the short morning cruise and we went in a canal which was lined with lotuses and beautiful coloured flowers, a photo opportunity not to be missed! 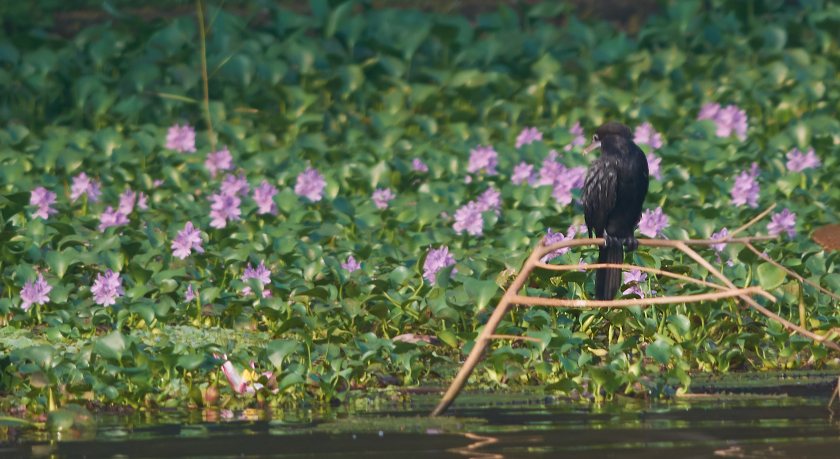 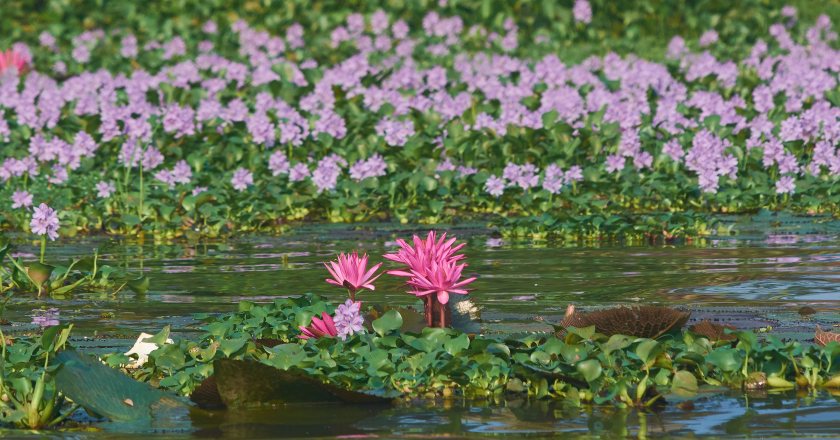 I put down the camera for the rest of the morning cruise and enjoyed the views. It had been a beautiful and relaxing anniversary spent on the backwaters & one I would remember for a long time.  Full credit to the better half for organising this! 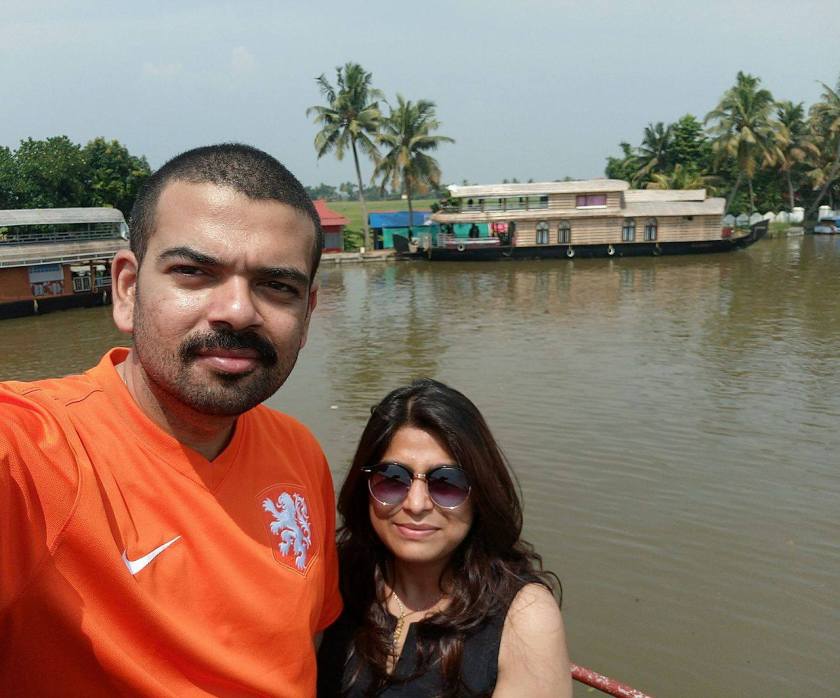 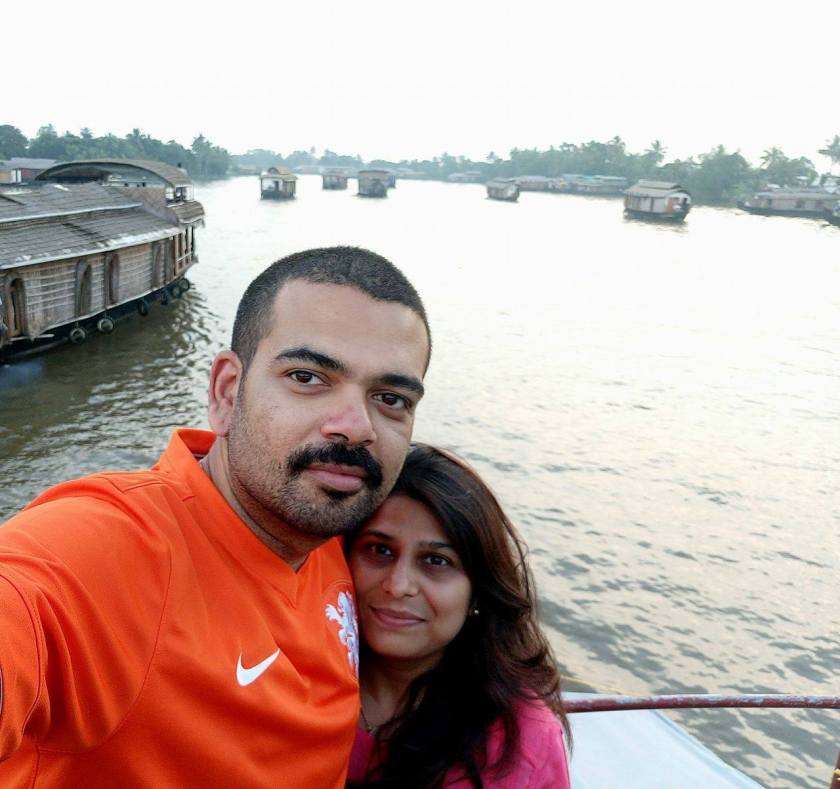 Next on the itinerary was 2 days in the forests of Thattekad. But that is topic for another post another day.