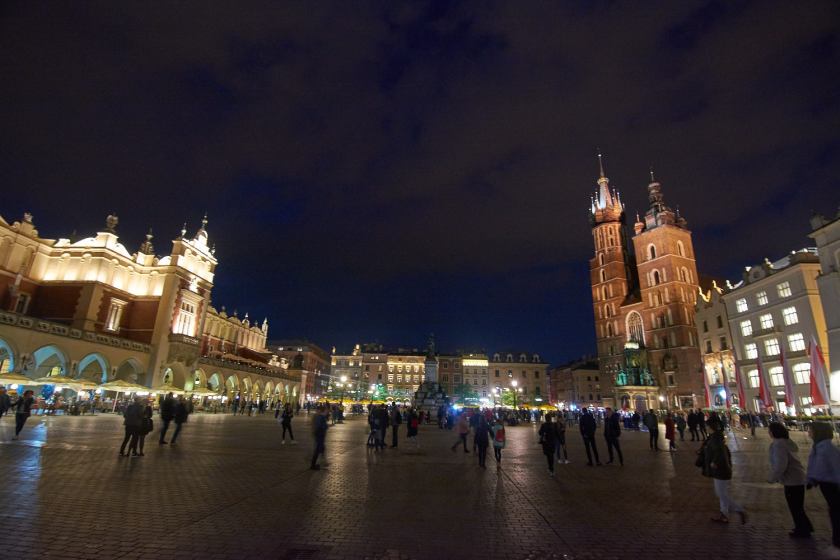 This post is the conclusion of a series documenting our travels across the country of Poland in May 2019. We had started out in Gdansk, travelled south to Torun and then  to the Tatra mountain resort town of Zakopane. We had left the wonderful historic city of Krakow for the last part of our vacation. We had spent a 3 days in the city and on our last morning we had climbed the tower of the iconic St Mary’s Basilica and visited the Royal Castle up on Wawel hill. (Krakow, Part 4 – Two Towers and a Castle)

After our tour of the Wawel castle we were seriously famished and eager to have lunch. So we stopped at a very popular beer hall & restaurant just below Wawel hill called the Pod Wawelem. There was a long line to sit indoors so we decided to sit outdoors and have our lunch since the weather was sunny and fabulous.

We ordered two types of Vegetarian Pierogis and a Potato pancake stuffed with beef curry topped with mushrooms. The sunny weather was also perfect to have a beer and I ordered one for myself while the better half had an apple juice. The better half didn’t like the pierogis here since they were pan fried and not just steamed but I enjoyed my huge meat filled potato pancake and beer.

I was stuffed to my gills after finishing that massive amount of food & was glad that we had a fair amount of walking to do. The next sight that I  wanted to see was the Old Synagogue, which was the oldest surviving Jewish building in all of Poland. It was in the Jewish quarter of Kazimierz, a short walk from the base of Wawel Hill.

Kazimierz was the place where we had enjoyed a most delicious dinner at the Judah square food trucks and had some of the best ice-cream ever at Good Lood. That day we had been too late to see any actual sights so we had just wandered around the street art filled Jewish Quarter.

We soon reached the Old synagogue and bought our tickets to go inside. I was half expecting an old lady to be sitting at the gate handing me a Kippah or Yarmulke (the traditional Jewish skull cap) like in Prague. I even searched for her! Then I realised that this is not a functional synagogue anymore and more a museum for Polish Jewish artefacts.

Even though its not functional the prayer hall is well preserved with the typical Pulpit and the Eastern located Torah. The rest of the structure is filled with all sorts of artefacts from the 15th century onwards. There is an excellent continuously running video documentary showing the history of the building and the area of Kazimierz from the medieval days to present day. We sat and saw the whole video before leaving the synagogue.

After watching the whole video we got a new perspective on the otherwise plain looking building. We found out how it was located partly underground because Jewish structures were not allowed to be taller than Catholic ones. So we went around it and checked that out. When we came out we realised that the front looks much smaller than the huge main prayer hall we were in.

We then circled around to the back of the synagogue where the whole wall is exposed and shows how it is deeper to the rest of the buildings surrounding it. Now it looked much more of the size that we expected. It was ingenious of the jews to build it partly underground so that the proportions needed for a synagogue are achieved without breaking the height rules.

With our Jewish History lesson over we proceeded back towards the Old town and our studio apartment. Krakow and its surrounding areas have many Holocaust related sights like the eery concentration camp at Auscwitz – Birkenau or the slightly more positive Schindler’s factory museum. But the better half is not a fan of depressing historic places and having read extensively about the World War II I tend to agree. So we have never visited concentration camps even though we have had the opportunity to visit three of the biggest ones but we limit our Jewish historic site visits to these beautiful synagogues and quaint Jewish quarters of towns.

We were on our way out of Kazimierz when we passed a wonderful smelling pancake place and decided to step in for a taste. It was a quirky little place with simple wooden tables and benches decorated with embroidered cushions. We sat down & ordered  a classic butter and maple syrup pancake.

At first I thought it was slightly expensive for a pancake. But when our order arrived it turned out that it was not just one pancake but a stack full of them! Having not been particularly pleased with her lunch the better half was ecstatic and enjoyed the unexpected bonanza.

After licking the plate clean we returned to our hotel to rest our by now howling legs for a while ( We had climbed two towers and a hill in addition to walking more than 10 kilometres already!). We had nothing special planned for the last evening. We just wanted to spend it in the Main market square loitering around and enjoying one of the most beautiful Old town squares we have seen. ( Nothing beats the Piazza del Campo in Siena, Italy – but this and Prague’s old town square do come close!)

After giving our legs some much deserved rest we set out again when the sun was just starting to set. This second Golden hour for photography, although lacking the solitude of the dawn one has the added beauty of the lights being switched on the buildings.  I have taken more photos and described this square more than all other structures in Poland, but it certainly deserves it.

We did what had now become our routine in Rynek Glowny. We started at the Cloth Market and went through it and circled around the square before ending our walk at the base of the towering St Mary’s Basilica.

We were just in time to listen to the hourly Hejnal being played from the top of the Basilica tower that we had visited in the morning. We stood there and listened to the abruptly stooping tune being played from all windows of the tower and joined the people below for generous applause when it ended.

The square was busy as ever with locals and tourists enjoying the beautiful weather. We circled Adam Mickiewicz who was being clambered on by kids of all sizes

I knew that I already had more than enough photos of these places but the great light of the golden hour is too good to resist. Plus this was the last action the camera would be seeing for a few days. So I did not hold back a  bit.

We then reached the base of the St Mary’s Basilica and just stood there and looked around for a while. It is more than likely that we would not be visiting Krakow again (never say never!) and we wanted to imprint the beautiful square in our mind before we left.

Soon the sun was gone and with it the golden hour. So we decided to have a splurge dinner ( by our modest standards!) at a restaurant on the main square. We usually do this at the squares we like a lot and Rynek Glowny was certainly in that list.

So we sat down on a outdoor table at the Restauracja No 7. It looked decent enough, had food that the eggitarian better half could eat and the prices seemed reasonable enough ( For the location i.e,)

The better half ordered her last Pierogis for this trip while I finally ordered the Bigos (A mixed stew with everything thrown in!). I ordered my last big glass of beer for the trip. On our last two trips to Central Europe we have eaten out at restaurants more frequently rather than the take aways that we used to do intermittently in Italy & France. Most of it is due to the extremely reasonable pricing of restaurants in the Czech Republic and Poland as compared to Italy & France.

We sat and ate the meal for a much longer time than we usually do. But finally it was time to return. We did one last round of the square taking even more photos along the way and returned back to our apartment.

We reached our apartment & slept early as we had an early morning flight back home. We had booked a taxi via the Aparthotel for the airport in the morning and the taxi driver arrived promptly on time and soon we were on our way back to Mumbai. Another European vacation successfully completed!

We had not expected Poland to be as beautiful and varied as the more fancied vacation destinations we had been to previously. It had surprised us at each step with one beautiful sight after another, great hotels, good public transportation, great food & most importantly polite people. The cherry on the already loaded cake was that it was our cheapest European vacation till date.

As I finish this travelogue almost three and a half months after I finished my trip I have stored memories of my time spent in this extremely underrated destination for me to revisit whenever I want. I hope to be back in person to Poland some day!

That’s it for my series on my time in Poland. Till next time from another destination, some other time, some other day.