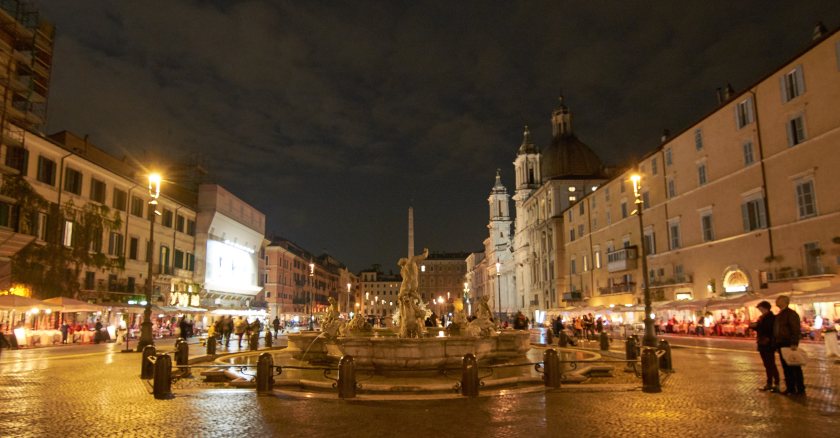 This post is a continuation of a series of posts documenting our vacation in Italy. This one describes the time spent in the wonderful pedestrian part of Rome around the Pantheon. This part of Rome in addition to the Pantheon has numerous beautiful squares, small churches with great art and ambience and no mad drivers to run you down.

As we were based in a wonderful B&B called the Pantheon Palace just a block away from the Pantheon, we were perfectly placed to explore this area on foot and in daylight as well as after dark; when it was beautifully lit up.

When we visited Rome, the Pantheon didn’t have any entry fees. So we visited it every day after our breakfast at the Pantheon square. Even if it isn’t free now, the Pantheon is one of the most complete buildings of Roman times. It was spared the desecration that affected the forum and the colosseum because it went from being a Pagan temple to all the Gods ( Hence Pan = All & Theos = Gods) in Roman times to a Church dedicated to Mary immediately afterwards which prevented people from looting it. From the exterior the Pantheon looks like a decrepit but complete Roman structure with typical Roman columns at the front.

As we entered the Pantheon almost immediately after it opened to visitors it was almost empty and we had the place almost to ourselves. Apart from the elaborate mosaic floor and the ornate altars the most striking feature of the Pantheon is its majestic Roman era dome. The dome built in Roman times without any modern machinery is a perfect hemisphere with a oculus in the centre. The oculus is the only source of light inside the Pantheon and on a sunny day its lit up superbly without any artificial lighting.

The interior of the Pantheon apart from the altar has burial sites of various important people from the Renaissance. The artist Raphael and a couple of Kings of modern Italy including Victor Emmanuel II are in the Pantheon. Just because it was so empty and the place so serene we sat in the pews and just looked around for a few minutes. And we liked this place so much and it was so close to our hotel that we did it again the next day.

After we left the Pantheon we went on to see the Roman Forum and the Colosseum on our first full day. We returned to the area after sunset to visit the famous squares of the region in all their floodlit wonder. The first square we visited was a rectangular square called the Campo dè Fiori which is lined by cheap cafes, has a statue of Giardano Bruno in the centre (A Philosopher burnt at the spot for heresy!!) and filled with street vendors trying to sell their wares. But it looks splendid lit up all the same!

From the Campo de Fiori we walked to the bigger and fountain filled Piazza Navona. The square is shaped like an oblong race course just because it was made where an old Roman Hippodrome existed. We entered the present day square to be faced with a huge square with 2 small fountains at each end and a huge one in the centre.  We moved towards the centre fountain which is based on the theme of 4 rivers from 4 continents carved by Bernini topped by an ancient  Obelisk of Domitian where all the crowd was.

We approached the rather crowded area around the centre fountain to see what the fuss was all about. I had already seen the genius of Bernini’s sculptures in the Borghese gallery the day before, so I wasn’t too surprised to see perfect anatomic details in the twisted figures that represented the rivers. (Asia is represented by our own Ganga aka Ganges!)  We waited for the visiting groups to move on and silently admired Bernini’s representation of the Nile, Danube, Ganga & Rio de la Plata. Then when it was relatively empty we took our photos and moved on.

As we moved to the far end of the square is a smaller but equally impressive Fountain of Neptune with the sea god rising out from the waters fighting an Octopus with cupids and sea creatures on all sides. The surrounding buildings at the far end and the great cloud filled skies made for a great photo.

There was a fine dessert shop at this end and I can’t resist a good macaroon so we bought a couple and a gelato to go with it as a pre meal dessert. This end of the square was fairly deserted and we stood here enjoying our sweet treats and the great view. After we had devoured our gelato we moved on towards the Pantheon again to see it lit up.

The Pantheon square looks totally different at night and the flood lights give the structure some much needed grandeur. We just walked around the fountain in the square aimlessly. I was ecstatic at my choice of stay as we didn’t have to worry about finding a mode of transport back, it was literally next door.

We returned back to our B&B with a take away dinner and red wine from the nearby coop supermarket and enjoyed it in the comfort of our room. Early next morning we were back to see the churches in the neighbourhood.

Rome has some beautiful small churches, we had visited the Moses in chains church near the Colosseum the day before and today it was the turn of the churches near the Pantheon. As a rule churches open very early in the day which gave us the chance to see them before we started our planned Vatican city tour.

The first church we visited was called the Sant’ Ignazio Church which has great 3D painted ceilings and a typically ornate altar and unlike the more popular churches totally empty. No tourists hordes, no chatter making it a serene experience. We always make it a point to sit in the pews and take in the atmosphere.

After this we moved on to the St Maria Sopra Minerva Basilica which has a very bare Gothic  exterior with an elephant obelisk at the front. The Michelangelo fan boy in me wanted to see the Jesus Christ the Redeemer by the Renaissance maestro  before I saw his dome at St Peter’s. So we moved straight to the statue where an elderly Dutch gentleman saved me a euro by lighting up the statue for me. I gave him a thank you nod and gleefully took photos.

Apart from the statue the Neo Gothic interior is the only one of its kind in Rome with a high vaulted arched ceiling painted blue with gilded margins. The altar is simple with figures from the life of Mary in the ceiling.  The church is well lit as compared to most other churches and had a well positioned pedestal which we used to take a SLR selfie to take advantage of the good light and an empty church.

We came out and went to the Pantheon square to have our breakfast. Visited the Pantheon once again (My favourite Roman Monument!) and moved on. It was a good start to the day on which we had the Vatican city to visit. That part has already been described in my previous post. This ends my time spent in and around the Pantheon. It is not on most tourist circuits, but is one of the best parts of Rome and a must do in my view when in Rome.