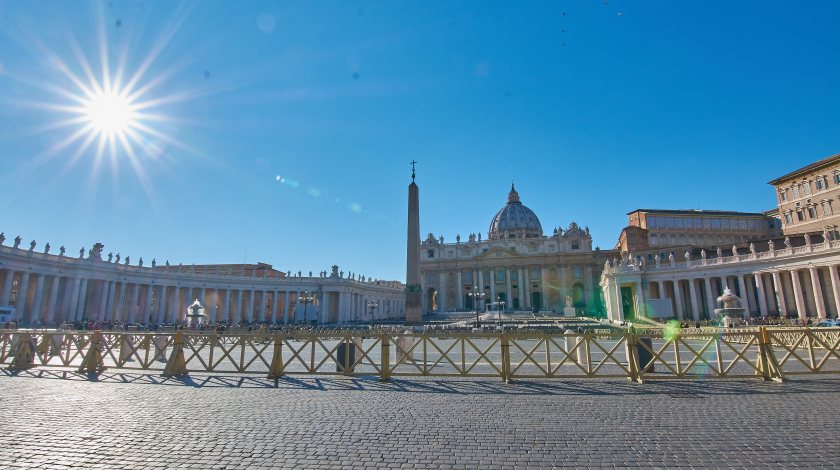 We had spent our first full day in Rome walking around the Centre of Ancient Rome, so we decided to do the country inside the city on our second (and last) full day in Rome. The Vatican City is a pocket sized country surrounded by the city of Rome on all sides and a must-visit sight when visiting Rome.

The St Peter’s Basilica, the biggest church on Earth and the Vatican museums holding one of the biggest collections of ancient art in the world constitute a major chunk of this small walled country. We had already reserved our entry time post lunch at the Vatican museums which is always a good thing to do since you are spared the harassment by countless touts and agents trying to sell you a guided trip to these sights.

So we got up early in the morning ( as usual) and went and saw the churches around the Pantheon and went to the Pantheon again. (I will write a separate post on this wonderful pedestrian part of Rome where we stayed and spent our evenings.) After having yet another average breakfast at the Di Rienzo restaurant we decided to go up the typewriter ( National Monument of Victor Emmanuel), for a birds eye view over the region we had walked all around yesterday. We still had a few hours to spare before we had to go to St Peter’s. It was a glorious sunny day with blue skies and I am a sucker for a good view. So up the typewriter it was!

We climbed up the marble stairs and up the monument till you reach the level with the glass walled elevator which carries you up to the top of the monument. There was hardly any line this early in the morning, and we were one of the first people on top. As the monument is central it gives a better view of Rome than the St Peter’s Dome.( We did that too later)

It was windy and cold inspite of the blue skies but the views more than made up for it. It was fun identifying the structures from the top using the maps fixed on the railings on every side. The Romans may not like the Monument a lot but it certainly gives a grand view of their unique city.

After spending a good amount of time on the terrace we took the elevator down and hired a cab from the Piazza Venezia for the Vatican. As I have mentioned in my previous post, I found taxis in Rome to be cheap and convenient with no risk of getting pick-pocketed. We got off at the mouth of the avenue leading up to St Peters and were immediately approached by agents selling tours. They quickly retreated when i told them I had reservations.

As we approached the huge church we saw that the entire circular space in front of the church was laid out with chairs for the Pope’s address the next day. It was by far the most crowded sight we had visited in our entire Italian trip. That 2016 was declared a holy year by the Pope made it even more crowded I assume. We took a few photos of the square and the huge statue of St Peter before standing in the security line to get in.

As we got past the security check we decided to go up the dome before going into the church itself. There is an option of taking the elevator part of the way up and it costs just 2 euros more than taking the stairs all the way up from ground level. So we decided to conserve our energy for wandering around Rome later and took the elevator up. We started climbing up the dome itself from the terrace of the basilica. We were by now used to these tight spiral stairs that we had encountered on every climb all over Italy. This was our last climb on this trip and I was both happy and sad about that.

As we got onto the gallery of the biggest dome in Italy built by Michelangelo we noticed the metal cage around it to prevent people from falling or jumping off. While it may be great from the safety point of view it certainly makes the experience inferior to all the other towers / domes that we had climbed. Plus it was super crowded and we had to jostle for space just to see the view and take a few photos. You can see the entire city of Rome from the Dome and even the hills beyond but the main attraction is the avenue leading to the church and the small country at the base which remains off limit to tourists.

We descended from the crowded dome much earlier than we would have if there was no cage. There is a cafe located conveniently on the terrace where we had a quick tasty and hot lunch of margherita pizza for the better half and a meat & cheese filled sandwich for me. We were now ready for the basilica itself and we took the elevator down and entered the Basilica.

What strikes you at once when you enter the Basilica is the sheer size of it. High ceilings, huge pillars and ornate carvings, mosaics and frescos decorate every centimetre of this centre of Roman Catholicism. It is meant to inspire awe and wonder from the pilgrims and it achieves that very easily.

Obviously there was a crowd inside but it not as bad as those in peak season. We listened to the Rick Steves audio tour and saw the various parts of the cathedral. Even though the space is very beautiful the crowds make photography very difficult. We moved slowly towards the altar and the dome area with the crowds. The altar area was barricaded off (Maybe as a preparation for the next day’s papal address) so we couldn’t rub the toe of the Bronze statue of St Peter as is the tradition.

The main altar is a huge four post frame made by the great Bernini who also made the symbolic dove window at the far end of the church. Michelangelo’s huge dome above and the gilded painted ceiling give it a grand look.

We visited the side chapels and looked at the art inside. But to be frank, if you leave the sheer size aside I preferred the Cathedral at Siena or even that at Orvieto to this. Those I would visit again but I don’t think I will go through the hassle of visiting St Peter’s again. As we turned to leave we stopped at another Pieta by Michelangelo. (A dead Christ being held by Mary – Pieta)  As compared to the Pieta in Florence carved by the master sculptor at the end of his career, this one carved by a young Michelangelo is less striking but impressive all the same.

We left the church and turned around the corner and went along the arrows pointed towards the Vatican museums. As we had a reserved time entry to the Vatican and we were travelling off season we just walked into the museum and collected our tickets went through security and started our museum tour.

Like the Louvre in Paris, multiple days are insufficient to see the entire collection at the Vatican museum. We had 3 hours maximum to spare. So a good audio guide and guidebook is essential to utilise your time properly. Thankfully I had both by Rick Steves. (Informative, informal and funny – keeps your interest going)

The Vatican museum which was originally the palace of Popes has Medieval art, Roman art (Obviously!), Greek art & Egyptian art in room and room and corridor after corridor. If the art wasn’t enough some of the corridors themselves are pieces of art. If it wasn’t for the guide we would have been lost and irritated. So we religiously followed the audio guide except for the Egyptian part which the guide skipped & I wanted to see since I don’t see myself going to Egypt. I am not going to describe the art and just let the photos of the famous pieces do the talking.

The Vatican museums also have a famous map room with detailed maps of the various regions of Italy. It was fun locating the places we had visited over the past ten days on these centuries old maps.

A very famous part of the Vatican museum are the Raphael Rooms or the Stanze, which are rooms with frescoes painted by the famous Renaissance artist Raphael. These rooms along with the Sistine chapel by Michelangelo were the public rooms of the Pope’s palace and meant to impress the visiting dignitaries. Each painting by Raphael in this room is worth its own post, but then I am not an art expert. The one I liked the most was one I had seen previously in some book in childhood, which had all the scholars of ancient Greece painted fictionally together. Nostalgia is amazing!

After being awestruck by the Raphael rooms I was ready to be zapped by the Sistine Chapel. All exits pass through the Sistine Chapel which is the room where a new Pope is elected and the private prayer room of the Pope. That one man at the end of his long life could have painted that whole ceiling himself with such detail is unbelievable in todays ultra short attention period times. It was predictably crowded but the better half smartly found us seats, where we could sit, strain our necks and listen to the audioguide about the finer details of this super sized piece of art. Sadly no photos are allowed so I can’t show it to you here.

We were about to walk out of the Vatican museum after taking the famous spiral staircase down, and I realised my watch was missing. I remembered taking it off for the security check, so I went to the lost and found and surprisingly found my watch with very little hassle. Happy at having my watch back we walked out and had a gnocchi and pizza as a snack at a touristy place just outside the Vatican walls since were tired from all the walking!

By now it was getting dark and we got to see the Vatican all lit up too. As in all cities in Europe and Italy, the  big monuments are beautifully floodlit at night and look spectacular. The St Peter’s Basilica was no different, the symmetric layout gets augmented with the lights and it all looks very festive and impressive.

That concluded our time at the Vatican and we started on our walk back. Rome at night is even more beautiful. But that is topic for another post another day.