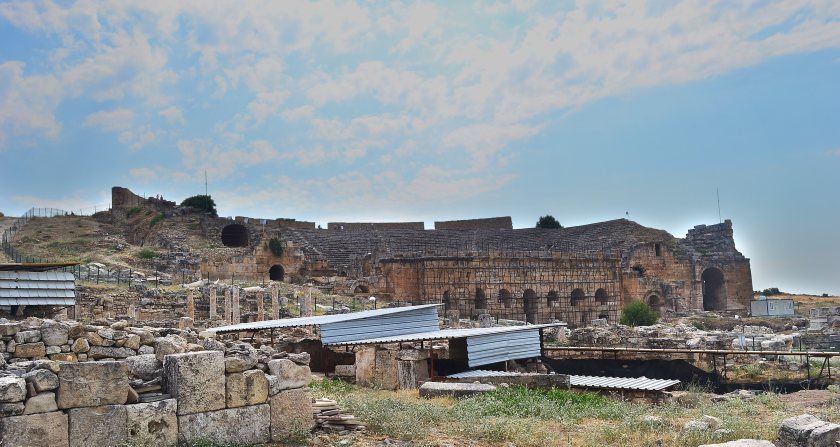 I return to documenting my Turkey Trip after a long gap attributable to many reasons not worth discussing here. In my first post of the series I described our time in the wonderful land of fairy chimneys, Cappadocia. As we travelled across the country to our next destination Pammukale, I distinctly remember the smooth roads and almost being run off them by an aggressive trucker!! Thankfully our driver managed to stay on the road and I lived to tell the tale.

It was a long journey and we were tired by the time we reached our hotel in Pammukale. The Lycus River hotel was a spa hotel which was nice enough for the two night stay that we had there. It had a typical poolside buffet which we enjoyed after the days travels and we retired for the night excited about seeing the famous cotton castles of Pammukale the coming morning.

In the morning we drove down to the famous site and climbed up the hill to see the famous calcium rock formations. From the park below it looked as if the whole hillside was covered with snow. Surreal considering that it was a blazing hot day.

The Cotton Castles are a World Heritage site and no vehicles are allowed to prevent the fumes from blackening the pristine white calcium carbonate terraces. The terraces formed by sedimentation from springs in the region are beautiful beyond words. Most of the terraces are now off limits, but you can walk around sans shoes ( also to preserve the white colour of the terraces) in a few of the terraces. It’s only then that you realise that it’s not snow as your eyes want you to believe but hard, rough stones as your feet now realise!!

We walked around in the terraces for some time taking in the view and remembering to take photos in between. After we had exhausted our time allowed in the terraces we met our guide Bariś and went to the neighbouring ancient city of Hierapolis.

Hierapolis is also a World Heritage site and has a we  entered the Roman ruins it feels like a different world from the terraces just few minutes away. Hierapolis is under constant excavation work and these were the first Roman ruins I had ever seen. Though it can feel a bit underwhelming at first, you have to remember that these structures are 1000s of years old and have survived lots of natural and man made calamities. With a bit of imagination you can imagine the grandeur of the structures in their time and the effort it must have taken to build such structures without modern machinery.

The well preserved amphitheatre at Hierapolis is huge. We entered it from the top and were in awe of the sheer size of it and the superb design which continues to be copied today after all these years. We actually tried out the acoustics of the thing and you can hear everything said on the stage from the top seat without straining!! Making such a huge theatre would be a herculean effort even today so I wonder how the Romans did it??

Much of the city is just pillars and foundations but it is being painstakingly excavated till date. After wandering through the city and its broken pillars we went to the still active Roman baths called Cleopatra’s pool outside with a modern snack bar and cafe to boot. The pools are supposed to have medicinal values but I believe most of the people in it were just trying to cool off and get away from the blazing sun.

We left Pammukale with great memories of a place with a unique mix of nature and history. We had lunch at a nondescript place and proceeded to our next destination which was another ancient Roman town of Aphrodisias. Turkey has a lot of well preserved Roman ruins as you would have already guessed by now!

The centre point of this town the temple of Aphrodite ( Yeah , obviously the town is named after her!!) is just a group of roman pillars with overgrown grass at its base which doesn’t make for impressive photos but the gateway to the town called the tetropylon is one of the prettiest Roman monuments I have seen. Its symmetry and location on a lush green lawn makes for a pretty picture.

Aphrodisias also has a smaller version of the huge theatre in Hierapolis but just as picturesque. The column lined Roman street in the background makes it look like a grand Roman city landscape.

There is a impressive collection of excavated beams with carvings of heads on it stored one on top of another making it look like a wall of head garlands. Just ahead is one of the two most impressive structures in Aphrodisias, the Augusteum dedicated to the goddess which has been reconstructed using the original parts and gives a good idea about the skill and scale of the artisans of Roman times.

Lastly we went to the biggest and the most impressive structure at Aphrodisias, the Hippodrome which is a  horse racing track from the Roman times. Its one of most well preserved Hippodromes anywhere in the world, and the sheer size of it is humongous. I couldn’t fit it in a single frame and had to do with taking photographs of two halves of it. You can easily imagine the chariots thundering down the track and the crowds cheering them on. Must have been a grand sight!!

We then said goodbye to Aphrodisias and started on our drive back. That completed a hectic day of sightseeing and we were happy to get to the hotel for a poolside dinner and a well deserved night’s sleep. Tomorrow we would be shifting base to the coastal resort town of Kusadasi and a trip to the most well preserved Roman city after Pompeii, Ephesus.

But that is topic for another post another day (hopefully soon!!)