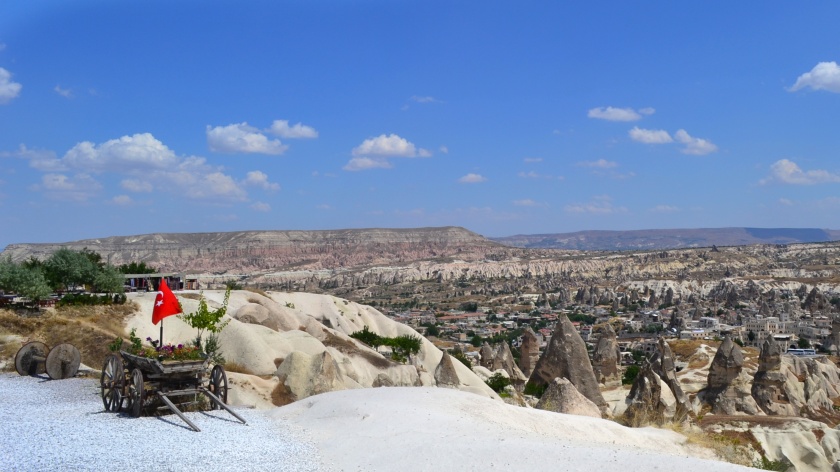 I return to my blog after a lengthy break with memoirs of my trip to Turkey from what feels like a long time back. I was about to complete my Plastic Surgery residency and this trip was a post exam break before I started working. At that time I didn’t have either the time to research or the guts to go on these trips on my own. I just read about the places I wanted to see in Turkey and left the rest to professionals. So we went to Cappadocia, Pamukkale and Hierapolis, Kusadasi &Ephesus, Cannakale & Pergamon and if course, Istanbul over a period of 11 days. This post is about our time in Cappadocia.

As this trip was a group trip it showed me both the good and bad sides of travelling in a group. The trip was divided into two parts, the first part was a small group of 4 in a comfortable Mercedes van with a guide and a driver. Our two travel companions were solo American tourists, who turned out to be great company and I am still in touch with them all these years after the trip. The second part of the tour was in a huge bus with a huge group of loud Goans who were a pain in the neck for both us and our poor guide. ( More on that in later posts)

The trip began in Kayseri airport after a long flight from Mumbai via Istanbul, which is the airport servicing the Anatolia region of Turkey where we were met by our guide for the first part, Bariś who transported us to our chunky modern hotel Dinler in Urgup. It was a good hotel but I would have stayed in a cave hotel like one of our American friends if given the chance next time. Hot air ballooning is one of the splurge things to do in Cappadocia and we booked a early morning balloon ride for the next day before we retired for the day.

Cappadocia is known as the land of fairy chimneys. These are finger (or rather phallic )shaped rock formations formed by slow erosion over the ages. I had seen photos of the place on the internet but the size ( people actually lived inside them!!) and the sheer number of these formations is to be seen to be believed. We started our exploration of this region from the air in a hot air balloon at dawn, what could be better!!

Watching a balloon fill up and rising slowly is an amazing site. As we filled into our basket and floated up and down the valley to get panoramic views of this beautiful landscape. You could see a lot of balloons in the air almost distracting from the fact that the formations were spread over a huge area and were varied in size and shape. We even spotted two foxes going into one of these chimneys which were inhabited in the days gone by. There were regions where these chimneys were interspersed with modern buildings providing a interesting landscape.

Time literally flew by and soon it was time to land in a meadow followed by champagne to celebrate our ride ( and our survival!!) Post champagne we continued on our exploration of the Goreme open air museum, this time from ground level. There are churches interspersed in these caves where the early Christians took refuge.Sadly photos were not allowed inside these structures, these churches though nowhere close to the grandiose churches of later dates are a sparsely decorated, poignant reminder from an era when Christianity was at its infancy and Christians were persecuted for their beliefs.

The centre piece of the region is a formation known as the Uchisar castle which is a inhabited rock formation which towers over the other structures below it is a very picturesque setting and the great skies meant that I got a photo which I liked so much that a frame of it now hangs in my house.

Cappadocia and Turkey is also the land of those quirky blue evil eyes. They are everywhere – Pendants, necklaces, bracelets, home decorations, We even bought a few as souvenirs later for family!! There is a tree laden with these evil eyes. It is believed that tying a evil eye to the tree wards of bad luck. While I did no such thing I took a photo to remember this blue tree.

We had lunch at a very touristy cave restaurant, a meal which was so forgettable that I don’t recollect what we had!! It was hot now and we went to the base of the Uchisar castle. There were a few hardy tourists actually climbing the huge thing, we intended to do no such thing, especially in the blazing sun.

Next  was a trip to the Kaymakli Underground City which is an ancient underground city excavated from soft volcanic rock and inhabited by different populations over its long history to escape from theirs oppressors. We were just happy to escape from the sun. As we went further and further inside this underground city the passages got thin and really difficult to get into ( not for claustrophobes!!). I was more concerned of getting through safely than taking pictures. When we reached some rooms which were actually spacious we took some photos, to remind us that we visited this dark and wonderful place.

We crawled out of Kaymakli and returned to the hotel for a well earned night’s sleep.Next day was a long long 600 km drive to our next stop Pamukkale with a few interesting stops on the way.

The interiors is a huge courtyard with stables to keep the horses and separate accommodation for the people, all very basic. But at the time it must have been a relief for the caravans to be inside those huge walls after travelling for a whole day in the sun. At the centre is a mosque raised on arches which is supposed to be one of the oldest of this type in Turkey. We took a lot of photos, climbed the mosque for aerial views and soon were back on our long journey.

Our next pit stop was the most touristy thing in the region, see a whirling dervishes show in Konya. The whirling dervishes are sufis who perform this spinning dance as a form of remembrance of God. They spin so hard and for so long it’s really amazing that they don’t get dizzy!! Photos during the actual ceremony are prohibited but they do a spin after the actual religious ceremony to satisfy the tourists.

After a quick lunch on the road with a lot of other tour groups we proceeded on our way. I was really impressed with the roads in Turkey, 600 + km were done in 7 hours of travel on a smooth road. Unheard of in India!! We reached Pamukkale in the evening completing the first leg of what would prove to be a memorable trip.

But more on that in my next post as this is already far too long for comfort. Next up is Pamukkale and Hierapolis!! till then.