This post is a continuation of a short series documenting our time at the beautiful Old Magazine House in Ganeshgudi, Karnataka. We had been there for a night and been blown away by the sheer variety of birdlife in the Birding Hide and the forests around the lodge. (The Old Magazine House, Part 1 – Initiation into the birders paradise)

We had just finished a great pre lunch session at the birding hide and scampered for a quick lunch at the common dining area with everyone keeping a look out at the birding hide to see if there was any activity. As it turned out we could have a peaceful lunch as the birds seemed to have gone off for their afternoon siesta. With a tasty and heavy lunch in our stomachs we returned to the hide but the lack of activity for some time meant that the chairs came out and everyone rested their legs and some even caught a quick nap, albeit with camera in hand or mounted on the tripod. I found it amazing that people trusted this place so much that expensive camera equipment was kept anywhere in the hide area without supervision. I still couldn’t do that, maybe after a few trips I may change my tune but for now the camera stayed firmly only body hanging from my trusty harness. 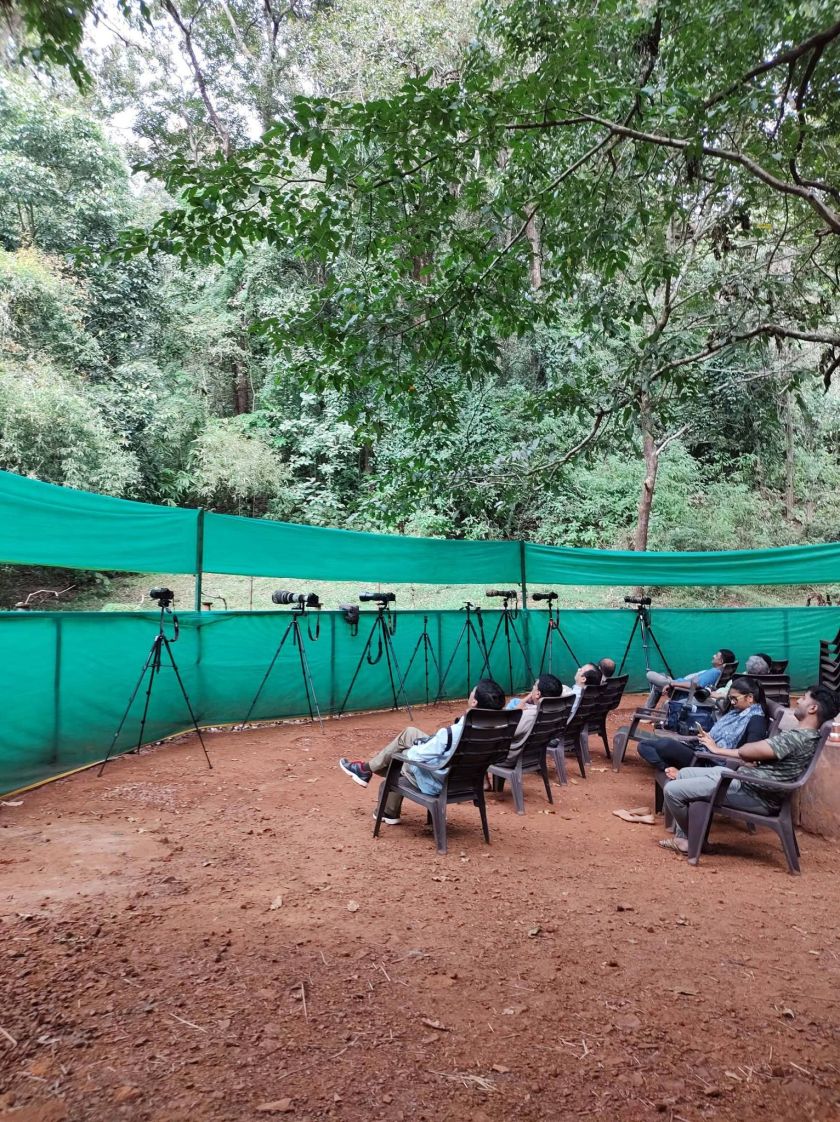 At such places where you meet people with common interests conversation is easy and people exchanged stories and information about their birding escapades in the recent past. I came to know about a few new places that even I hadn’t heard about and made a few friends. Hopefully we will use that information sooner rather than later and have new stories to tell.

As soon as people were getting comfortable in their chairs the birds decide to make a return. First to come was a Tickell’s Blue Flycatcher – another one of the brightly coloured flycatchers that live in these dense forests. It first scouted the bird baths from the bushes around the area. That brought the people out from the seats and they slowly moved to their respective tripods. Tripod less me just slinked in between wherever I could find space. We got a few photos of the bird in the bushes before it threw caution to the wind and descended to the bird baths.

As soon as the bird descended to the perches the cameras started going off like a machine gun. The bird seemed happy to pose around and please everyone. It gave me some pretty memorable photos of a beautiful little bird. By the time it was done I had photos of it looking pretty on a perch to the ruffled post bath look that I always enjoy taking photos of.

Taking a bath in the bird baths 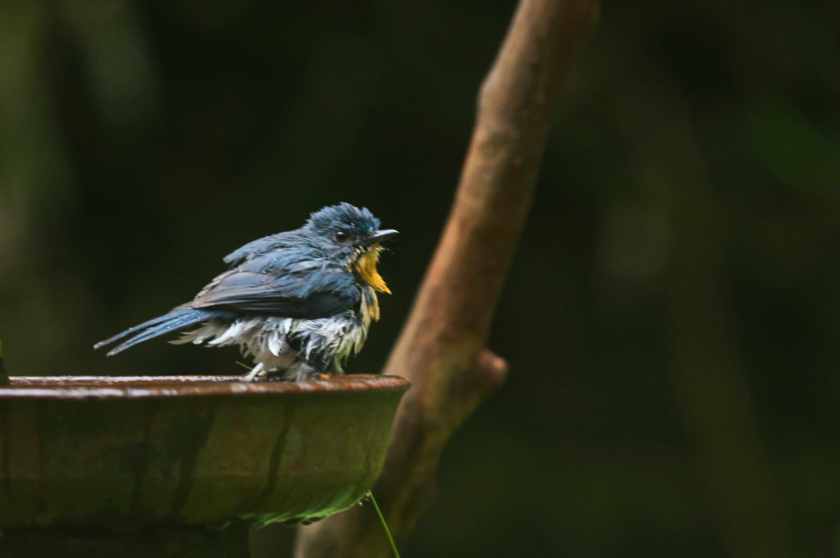 Giving me a pose in my favourite post bath ruffled look

Just before the Tickell’s Blue left the cameras turned and started going off against a rapid rate. That told me some thing new had come and I took my eye off the ruffled bird and saw what the fuss was. The experienced birder next to me told me that it was a rusty tailed flycatcher. I turned my camera and took a few photos. I was wondering how this was different from a brown flycatcher when the bird listened to my thoughts and turned around showing me what the Rusty Tailed meant!

It shows me why it is called “Rusty Tailed”

The Rusty tailed flycatcher then proceeded to have a quick bath. It seemed conscious of it’s appearance & flew off without allowing for any ruffled feathered photos. 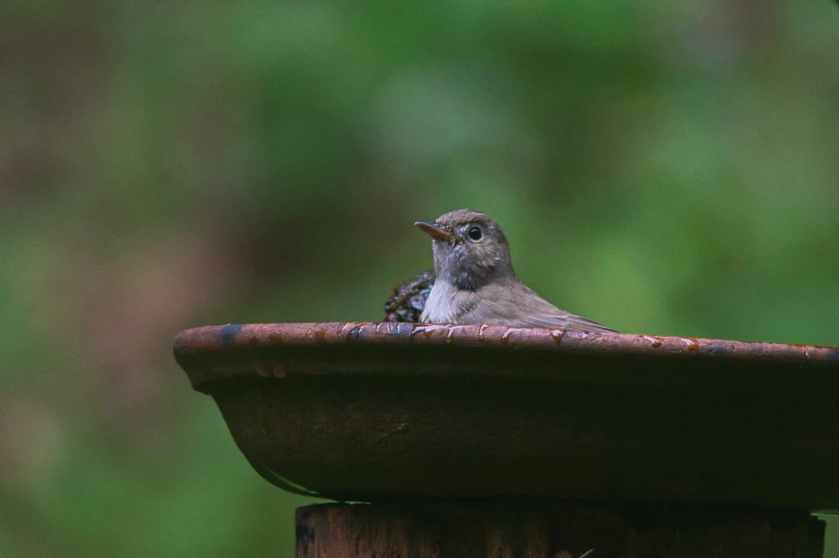 The Rusty Tailed Flycatcher takes a quick dip in the bath

We were all concentrating on the birds in the hide when some one noticed something crawling along the top of the metal frame of the hide window. It was a beautiful little forest lizard crawling totally ignoring all the people just a few feet away. Most of us turned our telephoto lenses into temporary macro lenses and took a few photo of the reptile. There were some pros who had a macro lens attached to another camera body for situations like this. They got in the face of the lizard and took photos ( Something I don’t really like about macro photography!) , the lizard got tired of their in your face cameras and scampered away.

A Forest lizard totally oblivious of all the attention

We were all having a chuckle at the lizard’s total nonchalance when there was a flash of yellow flying into the hide. It was a yellow browed bulbul making a quick appearance. It took a few sips and posed for a few photos before flying off. 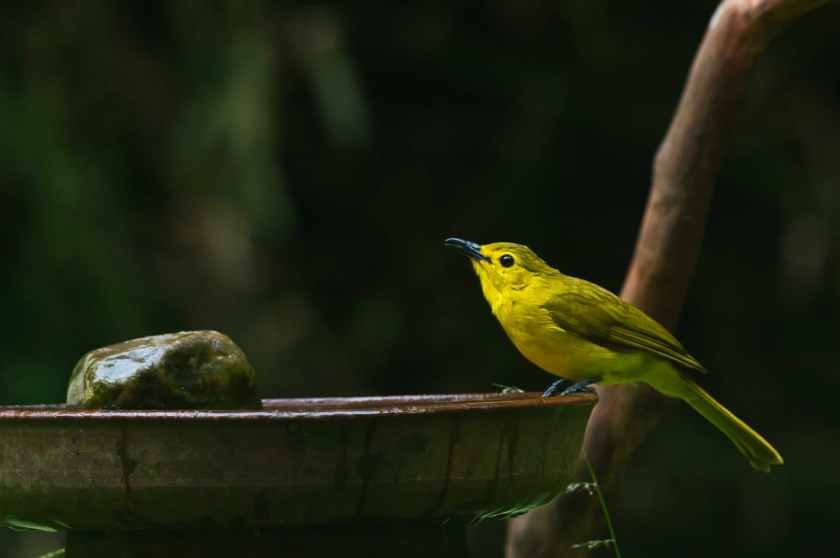 The disappointment of the bulbul not spending more time of the hide was quickly forgotten as a mixed flock of dark fronted and puff throated babblers descended on the hide chirping away to glory. They made a lot of noise and literally overran the bird bath. It was fun watching these birds fly around and enjoy the fresh water in the bird baths providing for some wonderful photos.

A pair of Dark Fronted Babblers

A Puff throated Babbler poses for the bevy of Photographers

Another pretty pose by the puff throated babbler

The Babbler party was crashed by a female Magpie Robin who just charged in and drove the babblers away. With the bath all to herself she then posed proudly for the cameras. Even though each one of us there must have so many photos of a magpie robin, the sheer energy of this individual made me take a few more to add to the collection.

A Female Magpie Robin poses after driving the babblers away

The Magpie was enjoying the baths for some time. A black naped monarch sitting in the bushes at the edge of the clearance assessed the situation for a while before deciding not to venture into the baths while the Robin was there. The pretty bird provided for some good photos in the bushes and even though we had seen it earlier we were all disappointed that it didn’t enter the clearance and perch near the baths. A Bird photographer is never satisfied!

Finally the Robin had enough and flew away much to everyone’s relief. With the Magpie Robin gone the other birds started to make an appearance again. First was a juvenile Asian Paradise Flycatcher. Unlike the adult male with its characteristic extravagant long white tail feathers, the young one is more plain looking. The naturalist there told us that the adult male had stopped visiting the hide since a few months. So for us this was as good as it gets when it came to Paradise flycatchers. Luckily the juvenile posed for us for a short period before flying off. 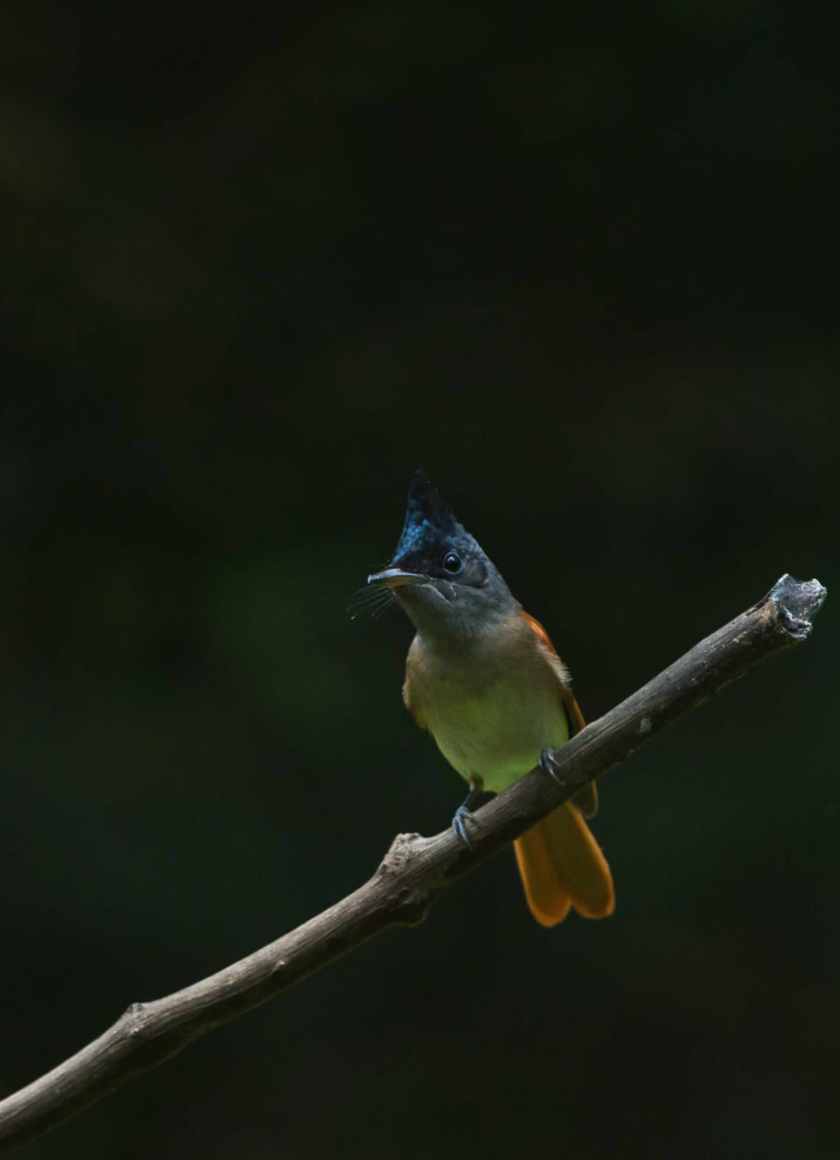 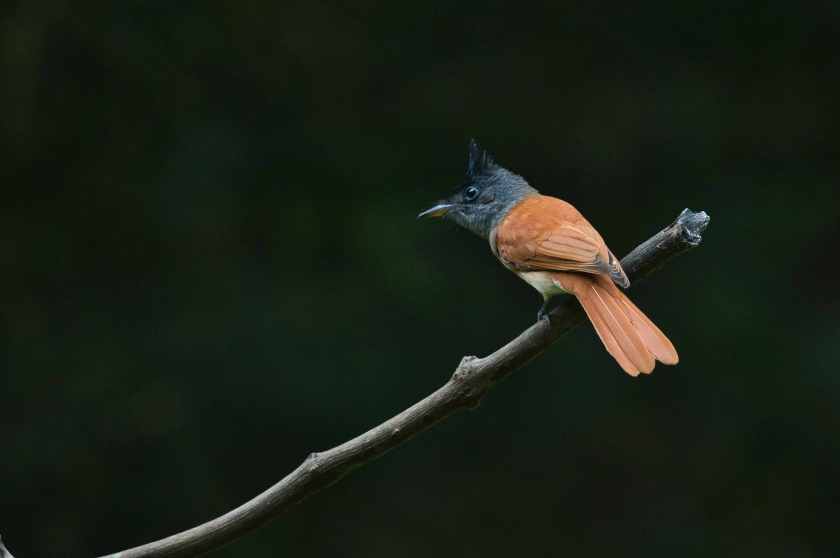 A Juvenile Asian Paradise Flycatcher poses at the hide

Next was the White rumped Shama show. This beautiful bird entered the bath and just provided every pose possible. All of us must have clicked at least a few hundred photos in-between the all of us. Sitting on the perch, sitting in the bath, tail up, tail down, ruffled feathers – it checked every box before flying off leaving us with a smile on our faces. 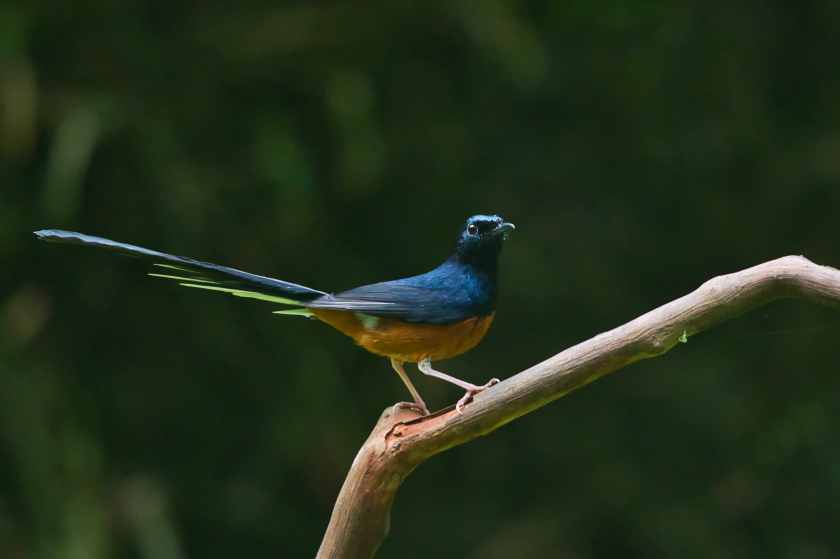 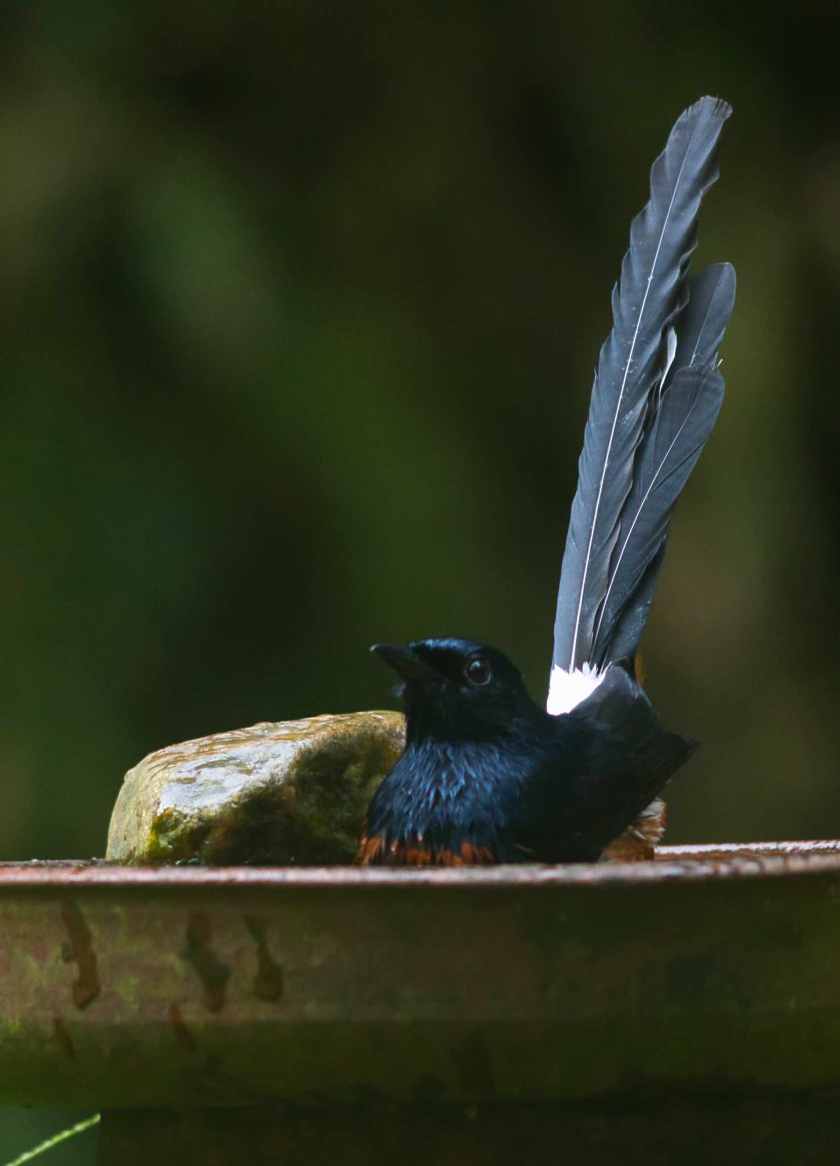 The various poses of the White Rumped Shama

As the Shama left and we were reviewing our photos to check whether we had done the beautiful bird any justice with our photos something flew onto the perch. It was yet another brightly coloured flycatcher – the white bellied blue flycatcher (male). I was amazed at the sheer number and variety of these pretty flycatchers at this hide. Needless to say we went crazy clicking photos of this vividly coloured bird. 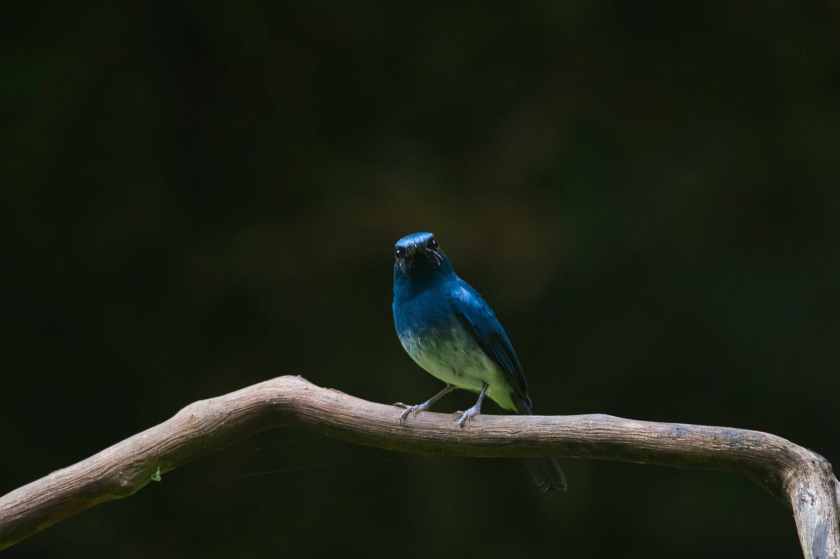 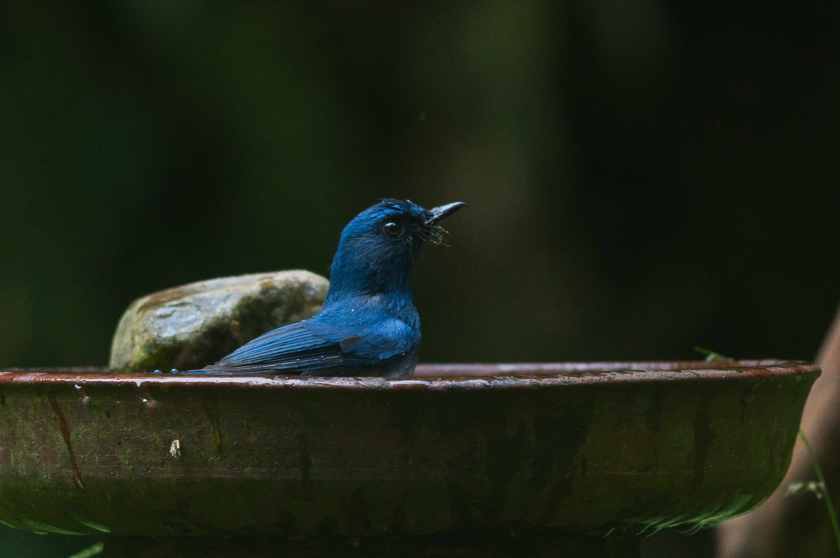 That turned out to be the last of the flurry of activity at the hide. We had been blessed with a good variety of birds and managed some pretty decent photos. We were about to go and have some coffee when I saw a dragonfly on the leaves in the clearance. Even the dragonflies here seemed to be partial to blue! So I took a few photos before having a cup hot coffee to cap a fruitful session at the hide.

A brightly coloured dragonfly at the hide

As the light faded we were offered the chance to go and see pied hornbills taking a mud bath. I was apprehensive at first but the manager at the hide said that it was a great place to take photos of these majestic birds in flight. So despite the fading light we decided to go and check it out.

We were driven to a locked compound owned by the jungle lodges group where we walked down to a field at the edge of the river. At the far edge of the field were a group of pied malabar hornbills. We walked as quietly as possible to the other side and started taking photos. Although the light could have been better it was a Pied Hornbill show in all its glory. 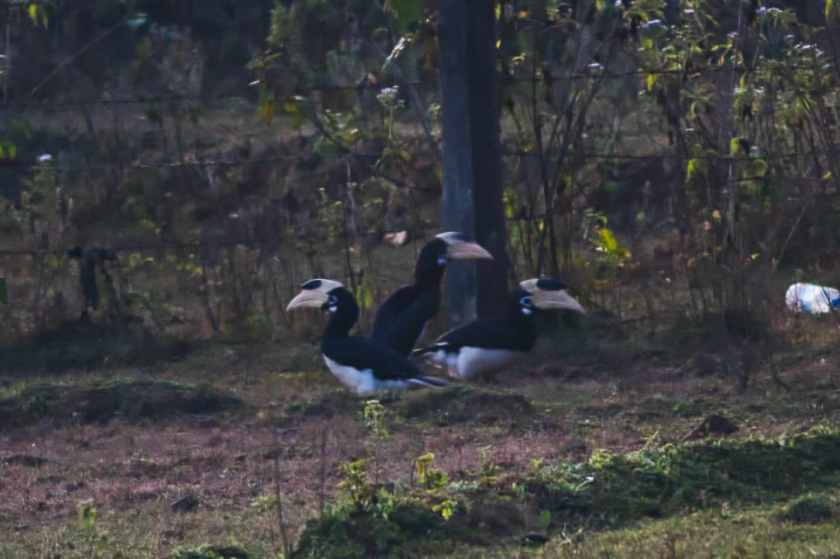 The words of the manager proved to be correct as we got chance after chance to take in flight photos of the birds. The D500 lived up to its reputation and provided me with one series of in focus photos after another.

They flew by in pairs, they flew across the field, they flew from the trees down to the ground, from the mudbath up to their perch and each time they did a half a dozen cameras clicked away to glory hoping to catch the birds in focus. Even in the poor light I got a lot of photos that I am pleased with. So I’m going to add many here, please pardon my indulgence! 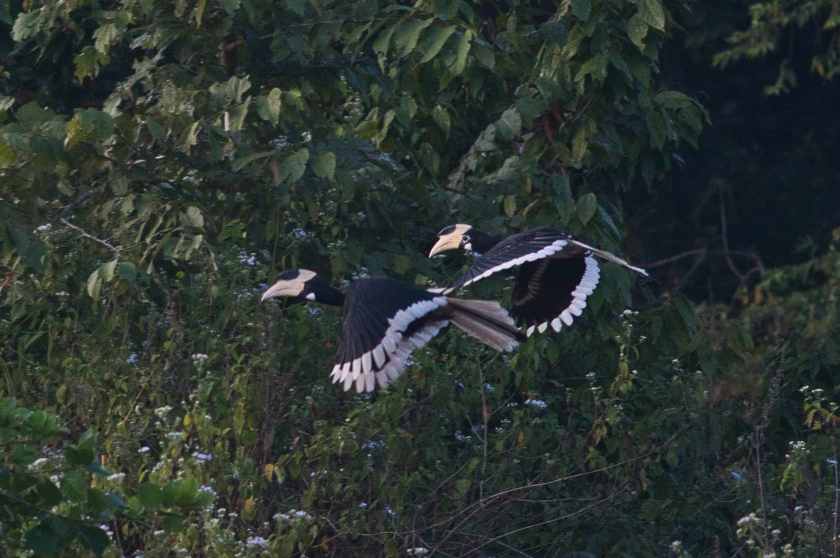 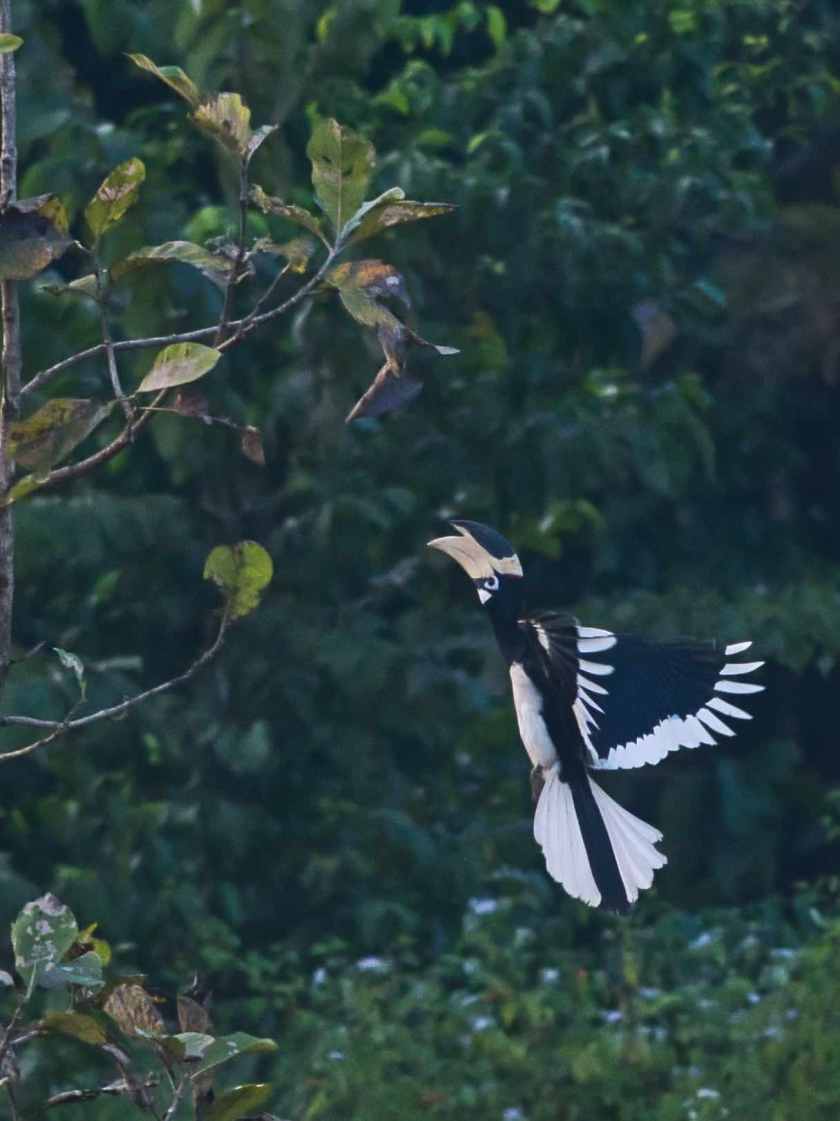 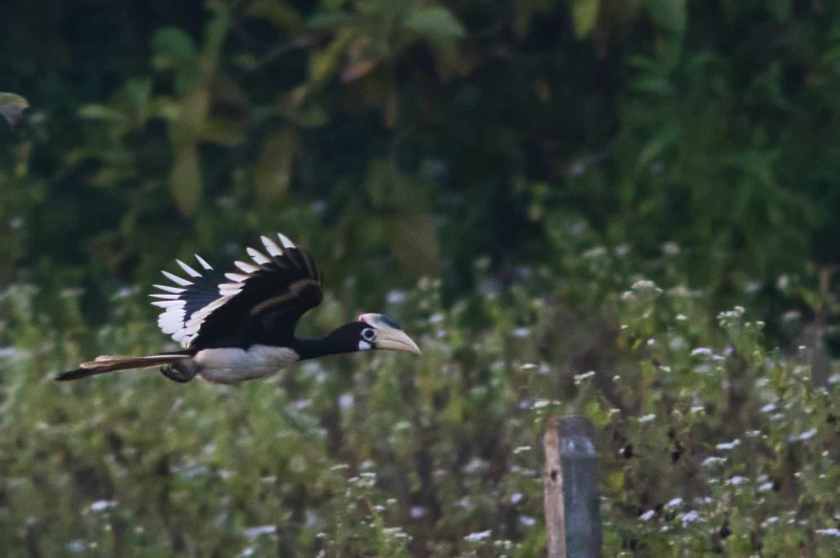 A inFlight photo tutorial provided by the Pied Malabar Hornbills

As we went crazy taking 100s of photos of the hornbills a lone open billed stork went about foraging it’s evening meal in the fields without any fuss. I took a few photos of the stork before turning my attention back to the hornbills.

A open billed stork feeding in the fields

We all missed a short locking of beaks that a pair of hornbill did in mid flight directly overhead. It is a mark of affection shown by the birds and done just before mating season. We waited for another pair to do it but the birds were done for the day. So we waited for the last male on the ground to fly off before making our way back to our waiting vehicle. 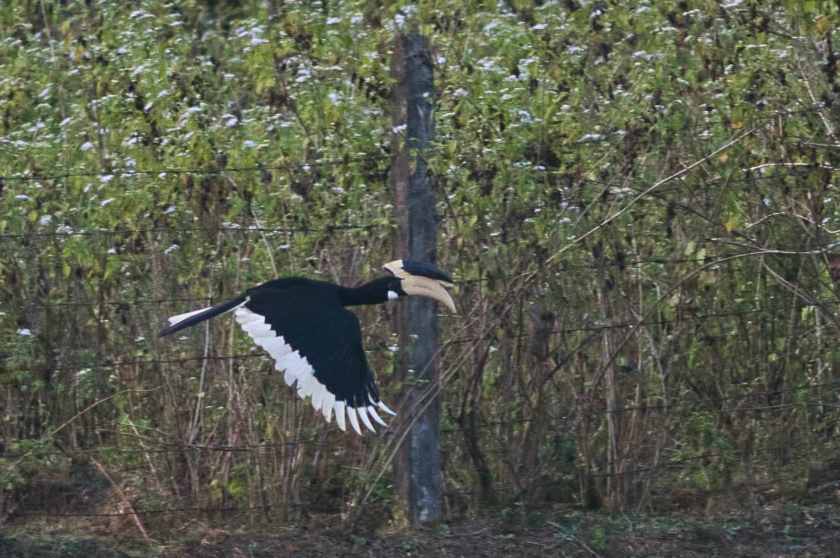 It had been a wonderful session of watching these birds in action and we returned back to the lodge. We learned on returning that we had missed some emerald doves and orange headed ground thrush that had visited the hide in near darkness. We hoped they would make another appearance the next day as we still had another day left at this birding paradise.

We returned to our cottage for some leg up time before returning to the dining area for another piping hot delicious meal.

The dining area at the Old Magazine House

It had been a day beyond my wildest expectations & the Old Magazine House went to the list of places I would certainly return to. The next morning we had a planned trip to the Government Timber Depot at Dandeli. We would certainly see more hornbills but I was curious to see what other birds we could find there.

But that is topic for another post, some other time, some other day as my enthusiasm for birds makes me ramble on for way too long.