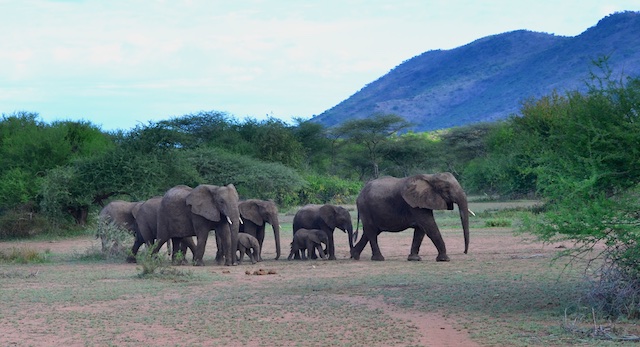 This post is a continuation of a series that I started to get over the fact that a long awaited trip was cancelled due to the ongoing pandemic. I had to go back and dig out the photos of the wonderful time I spent in Tanzania nearly 10 years ago & start writing about the wonderful memories I have from our time there. On the bright side if it was not for the pandemic these photos would have been lying around on a hard drive or two & the original SD card ( I believe in redundancy of data!).

We had spent two wonderful safaris in the Serengeti and spotted an amazing array of wildlife. (Memoirs of Tanzania, Part 2 – First taste of the Serengeti & Memoirs of Tanzania, Part 3 – A morning to remember in the Serengeti). We had spent the morning with an amazing  pride of lions & spotted a cheetah from close quarters. So when Hadji suggested that in the evening we go to the river and see the hippos and crocodiles we gladly agreed.

We had enjoyed a heavy lunch and a short siesta at the Serengeti Serena Lodge and were refreshed and raring to go back into the grasslands. We left the gates and within a few minutes hadji stopped and pointed to a tree with two blue birds. I had assumed from far that they were the nearly domesticated Superb Starlings of the region. They were not! They were a pair of Glossy Starlings that were not as people friendly and hence much lesser spotted in these parts. Sadly I only took a couple of photos before moving on. If it was today then I would have waited and waited till they gave me an acceptable pose and taken at least couple of dozen photos!

We were steadily moving towards the river when Hadji stopped suddenly & took a look with his binoculars into the distance. With his typical nonchalant tone he said “Duma”. That got me excited and scanning the field with my lens. And he was right, sitting in the middle of the field and so well camoflauged was sitting the Duma  / Cheetah. We stood there for some time and waited for the cat to move. Move it did, but in the opposite direction. Offroading is a strict no no in Tanzania. Even though it meant that we couldn’t go closer to the Cheetah that is a good thing. Makes the wildlife more comfortable and the sightings more natural.

Hadji was always positive that we would see more cats the next morning and he was usually right. So we put our disappointment behind us and continued our drive towards the river. We stopped once for a male Impala that was almost posing for us on the roadside. He was apparently the herd leader who was scouting at some distance ahead from the herd to check for threats.

As we neared the river and started to see small streams that were a feature after the rains. In one of the streams we saw a yellow billed stork oblivious to our presence and busy in his fishing. It was great fun watching the bird put his huge beak in the water and walk back and forth digging up the mud hoping to snare some fish or crustacean. He did manage to catch one and toss it into his mouth with a flourish, but 2010 me was too slow to catch this on photo!

Then we came across what to me was the sighting for the evening. A full family of African Elephants with babies of all sizes emerged from the shrubbery. Hadji stopped the vehicle at a distance. When I asked him why he said that elephants with small babies tend to get aggressive and its better to get a head start if one of them decides to charge at us! So we stopped at what seemed to be a safe distance and watched the family feed.

They came to a tree almost at the track side and started feeding on the greens. The little ones eating from the branches broken by the elders and all the time staying in between the adults.

Young baby Elephants are the most photogenic creatures. We had a lot of fun watching the little ones gingerly move in between the herd and never move out on its own. Now that is discipline that not even the so called intelligent species kids possess!

It was all going well for both us and the Elephants till one of the young males decided that he had enough of us. He gave us a small warning charge to tell us to bugger off.

This got the attention of the matriarch who came out and started stomping the ground with her front leg. It was time for us to leave before they got any more testy. So we left the Elephants to resume their feeding after a final shot or two of the stomping Matriarch with her kid besides her.

With our hearts racing from that encounter with the Elephants we moved on and finally reached the Grumeti river banks. It was all that Hadji had said it would be. Crocodiles on the bank, the river filled with Hippos & solid ground under your feet unlike the boardwalk at Manyara. For a change at a hippo pool I did not feel like I was walking the plank! It was not migration season and there were no herds of Wildebeest trying to cross it but this had its own appeal.

We could actually get down from our vehicle and sit down on the rocks at the river side. The better half bravely posed for photos while I kept an eye out for anything slinking too close to the place where we were sitting. Hippos were the most dangerous creatures in Africa anyway.

We spent a good half an hour watching the hippos float around the pool. It used to be peaceful till a hippo got irritated at another getting into its personal space and there would be a sudden burst of action. It was fun anticipating which hippo would get angsty next. Luckily I was even able to capture one of the bursts on photo.

It was a welcome change from rushing around in a vehicle for the entire duration of the Safari all the time. Seeing that we were enjoying it a lot Hadji suggested that take a picnic lunch on one of the remaining days and have it near a pond or a river. Even though the lunch would be no comparison to the spread at the hotel we agreed immediately. We were here to enjoy time in the wild not to gorge on food ( Not that we didn’t do plenty of that too!).

Hadji was happy to click a photo of us at with Hippos in the background. This is one of the many photos of our travels hanging in a frame at our house till date.

After leaving the river and the supposedly most dangerous animals in Africa, we came across a troupe of the animal I feared most – the deadly looking baboons. The only doubt I had about a picnic lunch was being attacked by a troupe of Baboons. Hadji said that we would choose an open area so that we can see them from afar and pack up and leave before we were overrun – that wasn’t a very comforting answer, but this was the Serengeti after all. It was as good as it gets!

We started our return journey back to the Serena lodge and crossed a group of Impala and a lone Masai Giraffe before we reached the park gates. Even though it was getting dark we stopped at each of the sightings for some time and took photos before returning to the lodge.

It had been a relatively relaxed evening safari by the usual hectic standards and we had enjoyed our time spent with the giants of Africa – The Elephants and the hippos. We spent some time at the common area of the lodge. Remember this was 2010 and we weren’t addicted to social media or needed that WiFi so badly. I don’t think I even had a smart phone that time. How things change!

We then returned to our room to freshen up before returning to the dining hall for another lavish meal. Fully satisfied we returned to our cottage for an early night. We had a scheduled balloon safari over the Serengeti at dawn the next morning. Balloon safaris are expensive propositions but it was our honeymoon after all, so a splurge was well deserved.

The balloon safari and the safari that followed the next day after is the topic for another post some other time, some other day. I would like to remember this relaxing evening with a smaller relaxed post.