This post is the culmination of a series documenting our travels to the mountainous North Indian state of Himachal Pradesh. We were ending our vacation on our ninth wedding anniversary at the wonderful Sunnymead Estate in Shimla. (The Sunnymead Estate, Part 1 – A blissful oasis in the middle of chaotic Shimla)

We had just spent the morning & early afternoon of our anniversary sightseeing around Shimla. (Sightseeing in Shimla -Avoiding crowds in the Queen of the hills) But after a while the crowds had begun to get on our nerves and we returned to our safe haven at Sunnymead. As I have already waxed eloquent about the estate and the room in my previous post I will try not to repeat myself here.

I have already mentioned the dogs of the estate in my previous post, but somehow inspite of being owned by a cat ( That is not a grammatical mistake!) I missed the cats at the Sunnymead. We got introduced to one of the felines when we woke up that morning by a loud meowing just outside our room door. When I opened the door to enquire to our surprise the cat walked right in and plonked himself in the middle of the room. Just like the dogs he just wanted to be petted away to glory. He would just plop down without a moments notice when you started petting him and earned him the nickname – Dhudup! After a healthy mount of petting he checked the room and saw that everything was in order and promptly walked out.

We had returned to Sunnymead early that day so that I could get some time at the numerous bird baths placed at one side of the house. Madhaviji had told me about the numerous small birds visiting the bird bath in the late afternoon & such armchair birding is an opportunity that I never miss.

So I got the 300mm on the camera and sat at an almost hidden spot and the base of the house staircase and waited. As I was waiting I spotted a curious Goosie looking through the flowering bushes, as if wondering “Why is this mad man just sitting here?”

I did not have to wait long for the action to start. The ever present Himalayan Bulbuls descended on the bird baths and started off my afternoon on a great note. It was almost perfect light and the bold bulbuls gave me near perfect poses too.

Soon the petite and colourful Red Billed Leiothrix made their presence known. A large noisy group descended into the bushes just behind the birdbath and started taking turns in ones and twos to enjoy their time at the baths.

I was not totally out of sight but as time went on the birds seemed to totally disregard my presence and allowed me to get some close shots which I otherwise would have no chance of.

A green backed tit too joined in the revelry and was aggressive enough to shoo away the Leiothrix and claim a bath for itself. After a few photos of this little guy I just put the camera down and watched him flutter around the bath and rinse himself till he was fully satisfied with his daily ablutions.

That afternoon the baths were dominated by these three species. There was an occasional Rufous Sibia that came down for a quick drink before leaving but other than that it was a bulbul, Leothrix and it show at the birdbaths.

As I was enjoying the action at the baths I noticed a small fluttery presence in the rose bushes just above. It was a little Warbler flying around the bushes and waiting for a quick dip without being harried by his bigger winged friends. Warblers are notoriously fidgety birds and getting a decent shot was an exercise in patience. Luckily the bird decided to sit still just long enough for me to get a decent shot.

Luckily for me the light was still good when I spotted a Sunbird in the flowers behind the house.Purple rumped Sunbirds are my friends and neighbours back home in Mumbai and meeting their Himalayan cousin here was an pleasure too. The colourful little bird posed perfectly for me a number of times and made my already good day even better.

While the birder in me focussed mostly on the birds and not on the numerous flowers still in bloom this late in Autumn. Madhaviji said that this was mostly the last batch before winter set in. As I am writing this currently in January, the flowers have been replaced by a thick carpet of snow as a cold wave has set in most part of Himachal Pradesh.

As I continued my walk around the estate a familiar sound took my eyes to the tree in front of the house. There was a Fulvous breasted woodpecker going hammer and tongs at the branch. The light by now was almost gone and I had to wait for it to come out into the less shaded part of the tree before taking a few photos.

As I was about to return to our room satisfied with the afternoons effort I managed to get some more otherwise skittish birds to pose for the 300mm. First was a greenish warbler that was as surprised to see me as I was surprised to see it. So I got a decent photo in the open before it returned to the safe left depths of the bushes.

The light was almost non existent when I spotted a bar tailed tree creeper doing exactly what its names say – creep up a tree! Unless you are at a birding hide or have tremendous patience and a healthy dose of luck its impossible to get these birds to pose for you. So you just do the best that you can do and hope that you get a decent shot!

I then returned to our room and spent the rest of the evening with the by now well rested better half and enjoyed a hot cup of coffee together on the balcony.

After we had decaffeinated ourselves we went down to the common living area of the house which is tastefully decorated and filled with books. My idea of heaven! 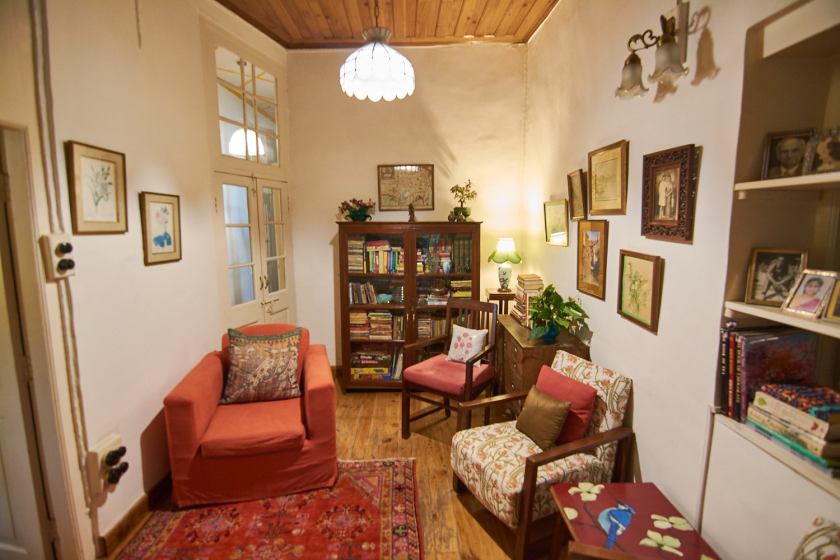 It was almost dusk now and the light was non existent but I spotted a blue whistling thrush outside the house and I changed lenses and went out to see what I could manage. The photos that I could recover from originally almost dark shots are a testament to the advances in photography rather any skill on my part.

As the sun went down and the temperature dropped we retreated to the warm confines of our room for some time before it was dinnertime. As on the previous day, dinner at the Sunnymead was an elaborate & lavish affair. Hot Bread pakodas to start with, followed by a delicious mushroom pulao, an assortment of locally grown veggie curries, delicious chicken curry for me with piping hot rotis and ending with an amazing makhana kheer. It was an amazing anniversary dinner that still makes me salivate as I am writing about it two months on.

Stuffed to the gills we returned to our room and promptly fell asleep in the warmed up bed. We woke up the next day sad that our wonderful time at the Sunnymead would soon be at an end. I freshened up quickly and sat with a cup of steaming hot black coffee on the balcony. By now I knew what to expect and where to see what birds and got one last hour of armchair birding in before stowing the gear away.

We packed our bags and went down for the last of our decadent breakfasts. Madhaviji had made delicious Mooli parathas for the better half while I was more than happy to enjoy the delicious continental fare on offer. If nothing else I will surely return for those perfectly poached eggs with parsley butter!

As we had finished stuffing ourselves, Rockyji our driver had arrived to take us down to Chandigarh airport from where we would be taking our flight back to Mumbai. We said our goodbyes to our canine friends and the gregarious and energetic owner of the Sunnymead estate, Madhavi Bhatia.

As we went up to our room to pick up our luggage there were a pair of Himalayan bulbuls shrieking away to glory as if saying goodbye. I couldn’t resist taking out the stowed gear again and take a few photos of these birds.

Finally after all those goodbyes it was time for us to leave the Suunymead estate. An uneventful descent down to the plains followed by an equally uneventful flight back home followed. What was eventful though was our stay in Shimla. The beautiful room, staff, food and delightful company at the Sunnymead had satisfied all our expectations and made us think about coming back here someday, hopefully soon!

That ends this series of posts from our vacation in Himachal Pradesh. It had been a memorable one and I hope to be back with another post from another destination, some other time, some other day.