This post is a continuation of a series documenting our travels across Poland. We were based in Gdansk for the first 3 days of our trip. On our second day there we had visited the humongous castle at Malbork. (A day trip to the largest castle in the world at Malbork, Poland) Walking through the endless corridors and courtyards of Malbork we had worked up quite an appetite. However there were no restaurants that looked appealing on our route to the station from the castle. So we decided to postpone lunch till we reached our next destination for the day.

We normally don’t do two day trips in a day. But it was a glorious sunny day and the forecast for the next day was a bit iffy. So on this day of superlatives, after the largest castle in the world we decided to go to the longest wooden pier in Europe at Sopot directly. That there are direct trains that connect the two destinations quite regularly helped in making that decision a lot easier.

We bought tickets and caught the next train to Sopot. The train ride was smooth and uneventful and soon we were at Sopot station. Our tummies started rumbling loudly in discontent now. So we decided to satisfy that need first & stop for lunch at a Pierogi restaurant outside the station itself.

It was way past lunch time so we were the only ones in the restaurant. So we ordered the safest items on the menu – Pierogis and some beer & soft drinks to wash it down with.

We devoured the pierogis in no time and soon we were off to the famous beaches and pier of Sopot. Sopot supposedly has the most affluent and well dressed people in the region. So I was sure I would stick out like a sore thumb in my worn jeans and t shirt.

It was still beautiful and sunny when we reached the main stretch. Just before the seafront is the small but impressive looking Garrison Church of St George. It looked pretty enough to warrant a visit and anyway since it was spring the days were long. We would have more than enough time to wander at the waterfront.

As I have found in most other countries the street were full of people but the Church was empty. So we sat for a while in the pews as is our routine, wandered down the nave to the altar, took a few photos and moved out.

We then proceeded to the much acclaimed waterfront area in Sopot. Usually I find beaches in Europe to be disappointing and rocky. But this one had a long sandy beach bifurcated by the famous pier that is known as ” The Molo”. We walked past the lighthouse and the stalls selling wonderful looking waffles and ice creams ( We would get to those later!) and made a beeline for the pier.

Even though the sun was shining bright there was a strong breeze blowing almost constantly and I was glad that I had worn a pullover/ sweater that day. We started walking the longest wooden pier in Europe and taking photos along the way.

It was a pleasant stroll on a breezy day. There were scores of people giving us company. Couples like us, families and tour groups all enjoying the sun and the unique experience of walking half a kilometre out into the Baltic on a wooden pier. But thankfully the Molo is wide enough to take the crowds and it never felt stifling. With a halt or two just to sit and appreciate the view on one of the numerous benches on the Molo, we reached the end of the pier.

Stretching out in front of us and all around us was the Baltic sea. We just stood there keeping our cameras away and just did nothing but stare out into the sea. Then reluctantly we started our walk back up the pier to the shore.

The walk back was even prettier as the sun started to descend and play peek a boo amidst the clouds. It made for a pretty picture and I needed no second invitation to capture it in my camera.

With the pier done we then turned our attention to the sandy beach. It was too cold to dip our feet into the sea but it is never too cold or too late for a walk in the sand on such a pristine beach.

These beaches are free to enter except for a small part that is used by the 5 star hotel lining the beach. As it was not swimming weather, the beaches were relatively empty and all the more enticing for me. I am more of a jungle/ forest/ national park type of guy, so beaches are more the better half’s type of place. But I had no complains about spending time on this stretch of sand as it was peaceful, clean and the weather was perfect. 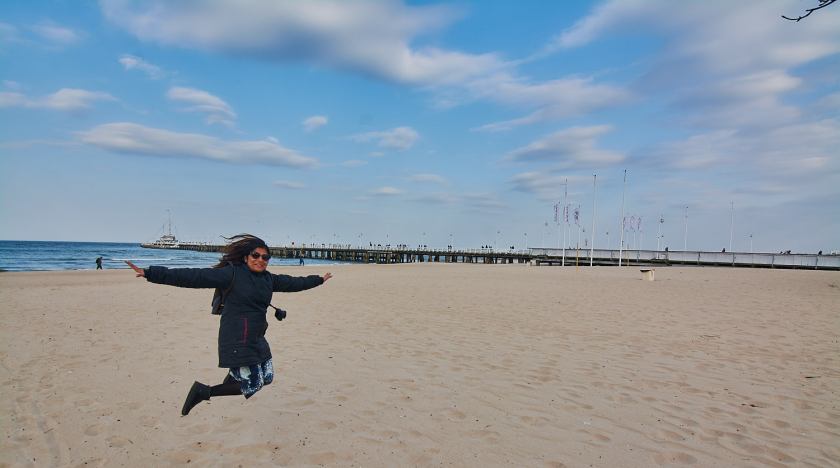 So we walked the beach for a fair distance till our tummies started demanding waffles that we had seen earlier. So we walked off this sandy stretch and onto the well paved waterfront area and bought ourselves a decadent chocolate laden waffle.

We then sat down and enjoyed our waffle in peace with a great view of the pier and the sea. The hot  fresh waffle with gooey chocolate was perfect for a post walk snack and was finished in no time.

We walked around the treelined waterfront area one last time before heading back to the station to catch our train back to Gdansk.

The better half noticed some pretty flowers in a garden just behind the waterfront. We entered the garden and found a colourful little garden with flowering plants of various types, fountains and surprisingly no crowds.

On later reading we came to know that the Park is called Skwer Bowiena and it houses a hospital and a church in its boundaries. We had just stumbled across it and decided to wander around for a while postponing our journey back to Gdansk.

Every European town has such lovingly maintained green spots right in the city and we have always enjoyed our time in them. This park in Sopot was no different, we had come for the pier and the beach and got a pretty park to walk through as a bonus.

After ambling through the park and sitting at a bench around the fountain, watching the locals walk their dogs and parents with children enjoying themselves at the fountains, we finally decided to start our walk back to the station, bidding the lovely park goodbye.

A brief train ride later we were back in Gdansk. It was near dinner time and the cafes in the Main town would be soon bustling with people. We decided to walk along my favourite Mariacka street with the front porches down to the riverfront avoiding the crowds on the Royal way.

Even though it was nearly 7.30 pm it was still bright. I still had to do my compulsory walk around the main town after dark. I decided to chance my luck and leave it to the last day and hope that the weather gods had pity on me as I was too tired to venture out again after the sightseeing filled day.

So we walked past the Green gate (which was finally sans crowds allowing me a decent photo) and towards our hotel Podewils.

There was now a question of where to have dinner. Both of us were too tired to walk back into main town. So we decided to make this day a Pierogi day and entered the Nova Pierogova, the small little pierogi place we had visited on the first day. We ordered our dumplings  & a beer for myself as the sun finally went down and the waterfront lights started to take effect.

By the time we finished our meal it was dark and the waterfront was lit up and looked sensational.

The ferris wheel was lit up but there was not a single soul to ride it. We took a photo of the lonely ferris wheel and moved onto the pedestrian bridge nearby.

The pedestrian bridge which lifts up to allow ferries and boats to pass periodically was done doing so for the day. We walked across and stopped midway to take photos of the beautifully lit up waterfront. The colours and the architecture with the lights reflecting off the Motlawa made it a photo I will remember for a long time.

After enjoying the view for a while we walked back the short distance to our hotel and promptly dropped off to sleep.

We had stayed 2 nights in Gdansk but had still not visited the interiors of a single sight in Gdansk. That would change on our final day when we planned to visit the pretty churches , town hall & climb the tallest tower in Gdansk. The icing on the cake would be a visit to the historic ” Solidarity” Centre.