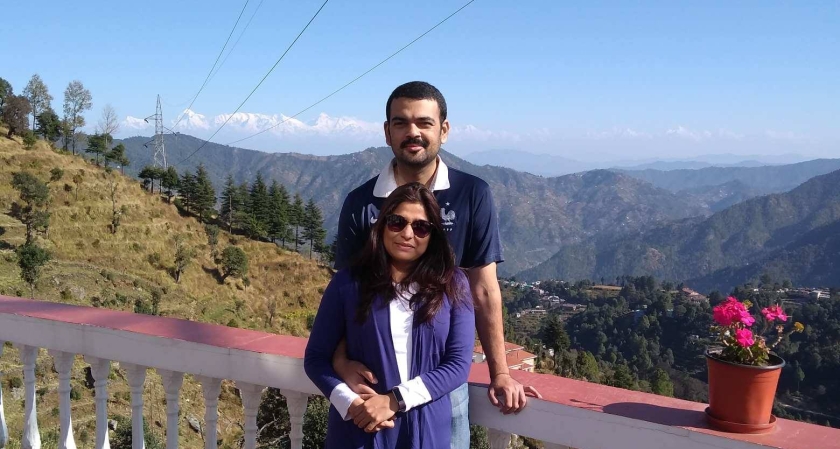 This post is a continuation of the series documenting our travels in a small part of the wonderful Kumaon region of Uttarakhand, India. We had started off in the birders paradise of Sattal & were now enjoying the comforts and views of the delightful bungalow called “The White Peaks” in Gagar. (The White Peaks , Part 1 – Mukteshwar and a short hike up the hill in Gagar).

I woke up early on our second day in Gagar, not because I didn’t sleep well. Rather I wanted to enjoy an early morning view of the Himalayas. For that I didn’t have to go very far, the view from the terrace of the bungalow was add good as it got in that region. The small town/ village of Gagar in the foreground followed by the green Himalayan foothills and the majestic snow covered peaks in the distance.

It was much clearer that morning than the previous day and almost the whole range was clear.The famed “Trishul” and “Nandadevi” peaks among numerous others were clearly visible. At such times I never waste a chance to get on the trusty 300mm to take a closer view of the peaks and take a photo or two.

Now that I was up I decided to go for a short walk around the bungalow. It was a lot colder here than at Sattal. Thankfully on that cold morning there was steaming hot water available for a bath. Refreshed I stepped out to see Kali waiting for me just outside the door. Luckily we had packed a few packets of biscuits and the both of us devoured a few before setting off to see what we could find.

Sadly there was not much bird activity in the vicinity that morning, or maybe it was still too cold for them to be up and about. As a friend has taught me when there are no birds in the sky you turn your attention downwards. Whenever I find birds I totally ignore the beautiful flora around ( The flora is the better half’s thing, I’m the fauna guy!). That birdless morning made me appreciate the beautiful wildflowers in the forest much more!

After wandering around for half an hour the sun started to shine brightly and the tummy started to rumble. I am used to a heavy breakfast to start the day and a few biscuits just don’t cut it. So both me and Kali returned to the bungalow. Mohan and Pawan were up and busy making breakfast. The better half was up too by now and enjoying the view from the terrace when I returned.

Pawan got us coffee and biscuits to start off as they laid out the breakfast. ( We had the coffee while Kali had the biscuits) It was beautiful and sunny by now and the cold dawn had given way to a pleasant morning. So I got rid of all the warm layers that I had bundled my self in.

I always carry a 35mm portrait lens with me on all trips. However it almost never gets used as I hardly ever get the chance to change lenses while on the move. There was no such hinderance here. The gorgeous view, the beautiful sunlight just was begging for few portraits. So out came the 35mm and we had fun posing around.

The light was so good that even my cheap mobile was taking great photos!

Mohan came to tell us that breakfast had been served and famished as I was that was music to my ears. He had made delicious aloo parathas that day, served with a fresh raita, butter & mint chutney. We must have eaten twice as much as we usually eat for breakfast, thats how good the parathas were!

After stuffing ourselves solid we were ready for the days sightseeing. I called up Mussaratbhai who was staying at the government rest house close by and told him that we were ready to leave. As we waited for him to arrive I took a few more photos of the wonderfully maintained house.

Soon Mussaratbhai arrived and we were off. We had left that days sightseeing totally upto him. I had just given him the brief that I didn’t want to go very far and that we had to be back at the White Peaks for a late lunch.

He had decided on a nearby tea garden, the Ghorakal Tea gardens near Bhowali as the first sight for the day and I wasn’t complaining. Tea gardens are usually a perfect place to just wander around, take in the typical smell of fresh tea leaves and take a photo or two. This region isn’t known for its tea and this was a recently started tea garden. While it isn’t of the grand scale as the tea gardens in Assam or even those around Ooty, this small tea garden had one thing going for it. We were the only ones there!

So we paid the entry fee and wandered around the tea garden and took a few photos. Mussaratbhai even got into the act and gave a few typical filmy poses.

As usual I was searching for birds wherever I went. So after we were done taking photos of the gardens themselves I put on the 300 mm and started searching for my winged friends, without much luck. The only bird around was a brown flycatcher enjoying the shade in the far end of the garden. Luckily it was flowering time and there were a lot of bees around and that kept me busy till I got a decent shot or two.

We exited the gardens and bought a tin of the local green tea as an edible souvenir of the trip. As we exited a number of vehicles entered with a whole group of tourists, I was certainly glad that we had left early as that meant we enjoyed the tea gardens in peace.

Next Mussaratbhai suggested that we go to the famous Kainchi Dham temple an hours drive away. This temple was founded by the disciples of a godman called Neem Karoli Maharaj just beside a small tributary of the Kosi. I am not a very religious person but I was curious to see this  ashram of the man whose photo adorns almost all establishments in the district!

We reached the ashram after negotiating the severe hair pin bends that the ashram is named after (It has got nothing to do with scissors, just in case you were wondering!). This is a popular spot and there were a lot of vehicles parked. After we found a spot, we disembarked and went towards the temple. At the gate was one of the biggest dogs I have seen. The gentle giant was just sitting there and enjoying the sunlight & I couldn’t resist taking a photo.

As photos are not allowed inside the temple we took our turns to visit the temple premises while the other sat outside and guarded the gear. It’s a fairly modern temple and the only thing that makes it special (for me) is the location the valley just besides a river.

What excited me more than the temple was the small rivulet along it. Such spots are prime hunting grounds for kingfishers. I had not seen any of the famous crested kingfisher of this region and I was hoping that we might chance on one in this location.

We scanned both sides of the rivulet from the bridge leading to the temple. Just near the temple was a white capped redstart enjoying the shade. Though it wasnt in a good light for photography I couldn’t let a bird so close by go without a photo.

As I moved to the other side, sitting there as if waiting for me was a crested Kingfisher. I could not believe my luck and without wasting time started rattling away shots. 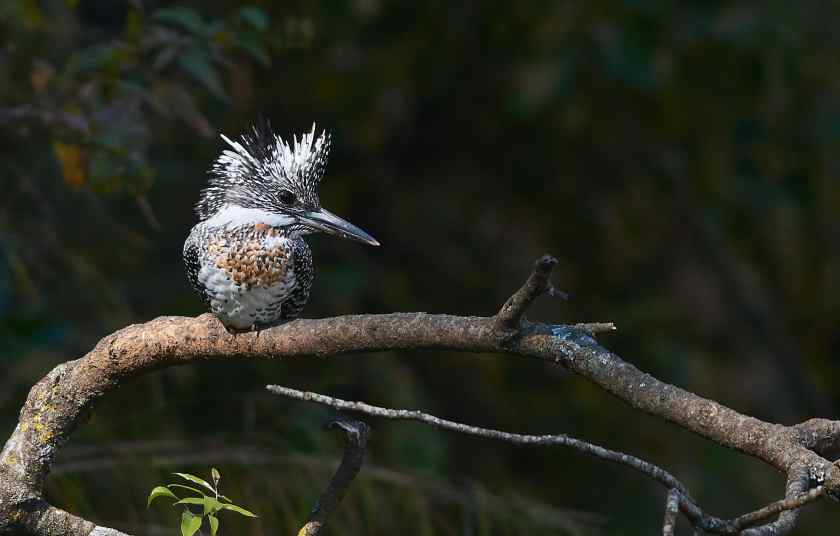 After a few minutes the kingfisher flew away to a perch further downstream. So we went back up to the road and went along the road to see if we could still find it. Sure enough at a perch on the far side was the crested kingfisher. But now he was joined by his better half. It could not have been any better.

The next half an hour was spent just observing these beautiful little birds as they posed for the 300mm. It made the whole journey to the temple worthwhile. 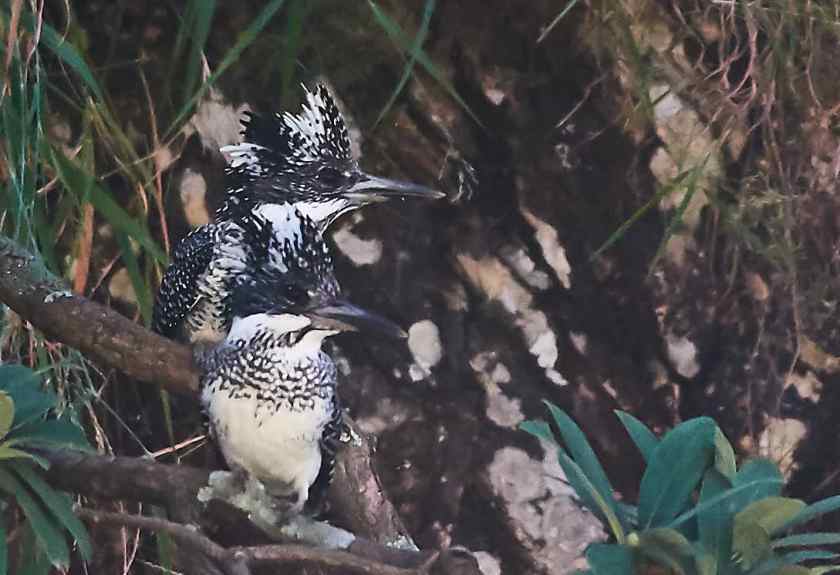 That was the end of the routine sightseeing for the day as I wanted to enjoy some time at the White Peaks itself. There is no point in staying at such a beautiful place if you don’t spend a day lazing around.

We went back and Mohan had kept lunch ready. It was delicious as always and we were left licking our fingers at the end. ( Even though this may get repetitive, I can’t stress enough how good the food was!)

Groggy after eating too much again we slept for some time before returning to the terrace to enjoy the sun before it disappeared and it got chilly again. Pawan served us hot coffee on the terrace itself. It was the ideal lazy afternoon, some sleep followed by a hot cup of coffee with a good book in hand, a great view and the best company. 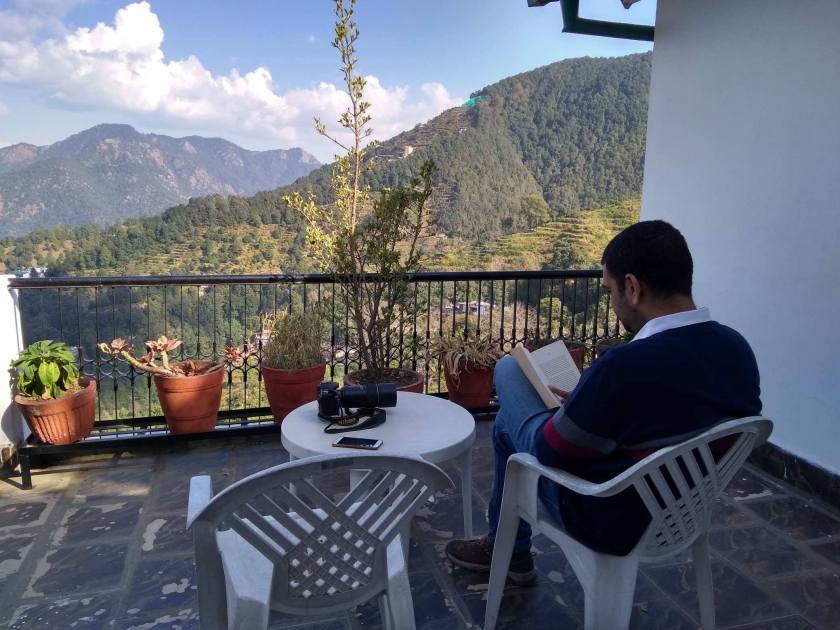 As the sun set we left the terrace and went down to the living room where Mohan lit up the fireplace and we followed up the lazy afternoon with a lazy evening. It was one of the most relaxing days of a vacation for us in a long time!

We wanted to go see Ranikhet the next day which was a good 3 hours drive away. So we had requested Mohan to prepare dinner early that day. The butter chicken that he had made that day was divine and as on the previous night, I ate much more than I usually do back home. Perks of being on a vacation I guess!

The next morning we both got up early and got ready to leave for Ranikhet. It was a beautiful clear day and as usual Kali was up and about waiting for a  few biscuits & a belly rub.

That morning the birds seemed to have listened to me grumbling about the lack of bird activity and came out in full force. Even though we wanted to leave early it would have been criminal to ignore the beautiful birds just waiting to be photographed.

That one hour of early morning birding put a big smile on my face for the rest of the day. As the aroma of breakfast started coming from the kitchen we moved in for breakfast. We would go to the famous hill station of Ranikhet that day and visit its famous golf course and temples. But that is story for another post, some other time some other day as I have again crossed my self set word limit again.