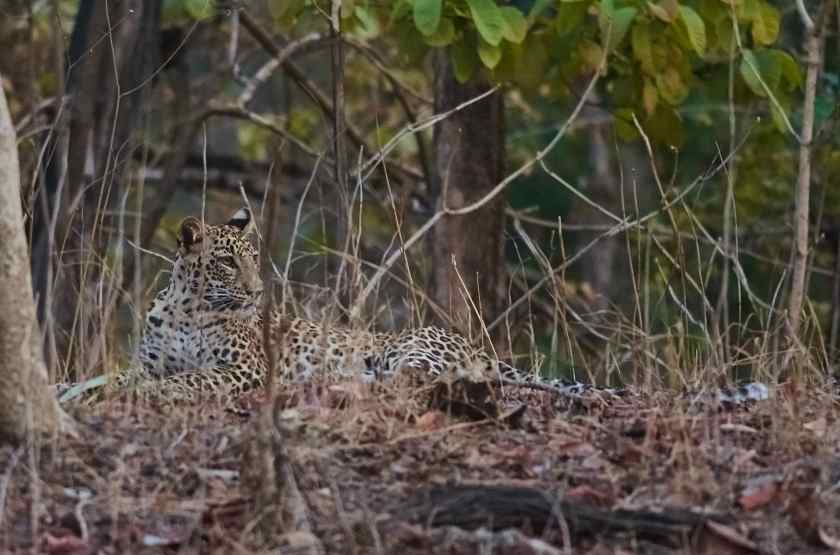 This post is the second of a two part series documenting my travels to the Pench National Park in India. The park straddles the two states of MP and Maharashtra and we were in the Turia sector in MP. We had witnessed some unseasonal rains on our first day which had made it an underwhelming day for safaris though I did get a good photo or two of my winged friends.(Pench National Park, Part 1 – Searching for the elusive big cat in the land of Mowgli!)

There was no sign of a cat on both our safaris on day 1 and my friend, who is the more hard core of the group was getting angsty about it. While he was hopeful that day 2 would be better than day 1. As I saw it , it could only go upwards from here on.

We got up at the ungodly hour that safaris necessitate and got ready for our morning drive. With our packed breakfast ready we were at the gate on time with our fingers crossed. The weather looked ok for now, but seeing how quickly it had changed yesterday there was always a doubt in our minds.

As we went inside we stopped at the location where an Indian Scops Owl has its resting place. Today the owl was peeking out and we got ourselves a good start to the day.

As is the trend on the morning safaris, we went to the waterhole first where there was the highest probability of seeing the Tiger at this time of the day. It was all peaceful at the waterhole. A herd of spotted deer was peacefully having their morning drink. When these creatures are so much at ease there usually isn’t a predator around. Sigh!

Soon the deer had their fill and walked away, we still decided to wait on hoping against hope that something might make an appearance when least expected. However the best we got was a peacock grandly making its way to have a sip.

On a nearby tree a Hanuman langur stared at us as if wondering why these idiots were sitting here doing nothing. The pose was so languid and royal that it deserved a photo!

Finally we decided that it was time to continue onwards since the waterhole was as peaceful as ever. We came across a group of frolicking langurs. The antics of these monkeys are fun to watch (from afar!) and we spent a few minutes doing just that. Among the group we noticed a mother and a baby sitting quietly under a tree, in stark contrast to the others jumping around. The baby seemed to look right at us , making for a good photo.

It was a clear morning and my friend wondered aloud why we hadn’t sighted any raptors. For the next hour or two we were just counting the honey buzzards and the white eyed buzzards that we saw, with a jungle owlet thrown in for good measure.

The first raptor we saw was an oriental honey buzzard sitting amidst a gaggle of leafless branches. These birds always seem to stare straight at and seemingly through you and this guy did just that.

We moved around to try for a better view, but the light really wasn’t in our favour when we had a clearer view. So after a few photos we decided to leave the buzzard in peace.

As we left the buzzard behind, the next raptor to come into view was the cute little jungle owlet. Pench seemed to know that I didn’t have good photos of Jungle owlets and in my two days here it gave me some pretty good ones. This fellow sitting in the open in decent light was as good as it gets.

The parade of raptors continued with a white eye buzzard sitting on a high perch soon came into view a few minutes after we saw the owlet. I chided my friend saying that he should have wondered aloud about big cats rather than raptors and we would have seen a cat or three by now!

We had also seen quite a few lesser flame back woodpeckers flying around. None had given us the opportunity for a good photo. We saw a duo flying around, as the day had worn on and the chances of seeing a cat were next to nothing, as the sun bore down on us. We decided to stalk this duo till we got a good photo. The pretty flamebacks are the punks of the woodpecker family with a plumage thats as bright as their name suggests. Its impossible to get a bad photo of this pretty bird once it sits still, the problem is that it hardly does!

As we almost reached the centre point, the raptor show continued. Now there was a white eyed buzzard on the centre of the road. We stopped at a distance to get some photos lest we scare it off. We got our shots and the buzzard seemed to notice that we had kept our cameras down and flew off on cue!

Right before centre point we sighted another flame back woodpecker and got off a few shots before it completely disappeared in the hole in the tree.

Finally we reached centre point and devoured the breakfast packed for us in no time. We walked around a bit, stretching our legs after being in the vehicle for 3 hours.

At centre point we noticed that no one had sighted a cat that morning. The rains on the previous day had kept the cats away from the usual waterholes. So cursing the weather gods we resumed our safari.

The sun was high and bright in the sky now and it was sweltering hot. We moved through the park and a group of spotted deer were there pretty close to the road. The Alpha Stag stood guard and stared straight at us making for a good portrait. He waited till the herd had walked away to a safe distance before bolting off himself.

It was too hot for the animals to wander about now and we soon came upon a jackal panting in the heat in the shade of a tree.

Although we hadn’t seen what we were hoping for (as is so often the case in safaris) it had been a great morning for birding. If it hadn’t been a tiger reserve we would have been pretty elated. As we headed back we sighted even more birds in great light. There was the mascot for the morning, a white eyed buzzard, the colourful Indian Pitta, a black shouldered kite on its perch and finally a plum headed parakeet having its lunch. That elevated our moods a bit as we headed back for lunch.

We returned to the Kipling court for a bath and some rest. As the others rested I walked around the hotel and got some photos of the birds around.

Post lunch we slept for a while before setting off for our final safari of this trip. My friend had taken my suggestion seriously and was wondering aloud about not sighting big cats as we reached the gate!

It was hot and clear, that kept us hopeful. As we entered the gates a sambar with moulting horns stood there as if to welcome us in. These stately deer are always a pleasure to photograph and this was a good start to the safari.

It was so hot that even the birds were feeling it. We next came across a pair of rollers panting away to glory with open beaks. With a 300 mm prime lens I could only get one of them in frame at a time, well at least I got a sharp image!

We reached the second of the waterholes in this region and no luck, to cap it off this time there was a rhesus macaque taunting us!

We continued our slow movement around and soon came across a jackal that had been enjoying a mud bath as a respite from the heat. We knew that now the animals were on the move and it was now or never. ( At least for this visit!)

Our guide heard warning calls of deer and monkeys and our hopes went up. As we were waiting at the region where we heard the calls a black headed oriole came and sat on a tree nearby. A welcome opportunity for using the camera rather than sitting and waiting.

Soon we got the news that a leopard and her cubs had been sighted nearby and as if on cue the ghost of Ayrton Senna entered our driver and we were racing to that location. Considering our luck on this trip I thought we would be too late. But thankfully the pessimist in me was wrong. A big cat at last!

In the grass just on the peak of a ridge sat a leopard. At such times its better to shoot away to glory lest it decides to move off. and that was exactly what we did.

Then I scanned the area through the 300mm. The mother was in best sight, but there were two cubs also on the ridge. One was fairly well seen while I could only see the head of the other. It was time to go trigger happy!

The leopard family seemed to be in no hurry to leave and the mother even gave a big yawn as if bored with all the attention!

The cubs were constantly looking at the mother as if waiting for their instructions.

As more and more vehicles started accumulating the leopard mom, who was lying down by now got up to see what the fuss was all about.

Soon she decided that enough was enough and decided to move on to a more peaceful place. She sat up and gave us the photos that made the entire trip go from average to superb.

Finally the majestic cat turned its back on us and set off to find a better resting place. The kids had already disappeared over the ridge. We said goodbye to mom with some more photos before she went out of range for the cameras. Then we just watched her walk away into the jungle.

My friend finally had a smile on his face.  We had come hoping to see a tiger and come away seeing a family of leopards. This unexpected nature of safaris is what makes it fun.

There was still some time left for us to move out so we returned to the waterhole we had started the day with.

As if on cue we got a peacock trying to seduce a peahen. The poor guy danced away for a good ten minutes. (My friend has it on video!) But alas it wasn’t enough to impress the choosy peahen who walked away unflustered.

That left the poor guy wondering what he had done wrong! He wound up his show and left. That was the cue for us to leave and we exited the park with a smile on our face.

We picked up our bags from the Kipling court where our vehicle had arrived to take us back to Nagpur.

We would soon be back to Mumbai where our routines awaited & would keep us busy as always. But it had been a great short trip to an under appreciated national park and memories of Mowgli’s stomping grounds would be with us for a long time to come.

Till next time from a new series about a new destination.