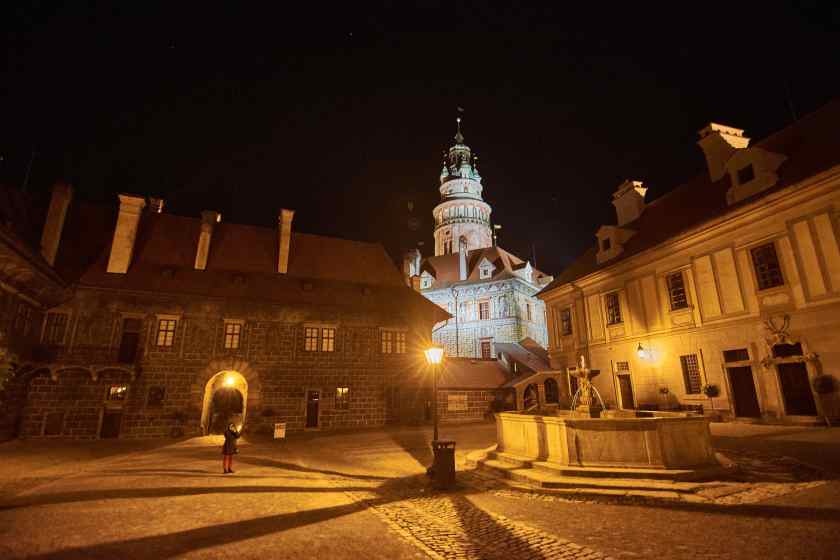 This post is a continuation of the series documenting our stay in Central Europe. We had spent the day exploring the medieval town of Cesky Krumlov. Although Krumlov is very pretty, it can get overwhelmed by tour groups and day trippers  from late morning to evening.  At this time of the day it resembles a medieval amusement park with the attraction being the town itself.

Sights like the Bell tower and the Castle interiors ( Which we didn’t visit ) have limited opening hours, making it impossible to avoid crowds. But the town itself is best enjoyed at leisure after the crowds have returned back to Prague leaving Krumlov almost empty and beautifully lit at night. That is the reason I had initially planned 2 nights in Krumlov but finally had to settle for one owing to lack of time, well better one than none!

After visiting the bell tower and the Castle courtyards and going up to the hill of the Cross (Českÿ Krumlov, Part 1 – Walking around a Czech Medieval Wonderland) we had returned to our apartment and rested for some time and made coffee for ourselves which we had with the Theplas we had carried all the way from Mumbai. Not that there was shortage of good food in Krumlov, but we didn’t want to carry the Theplas all the way back to Mumbai again! 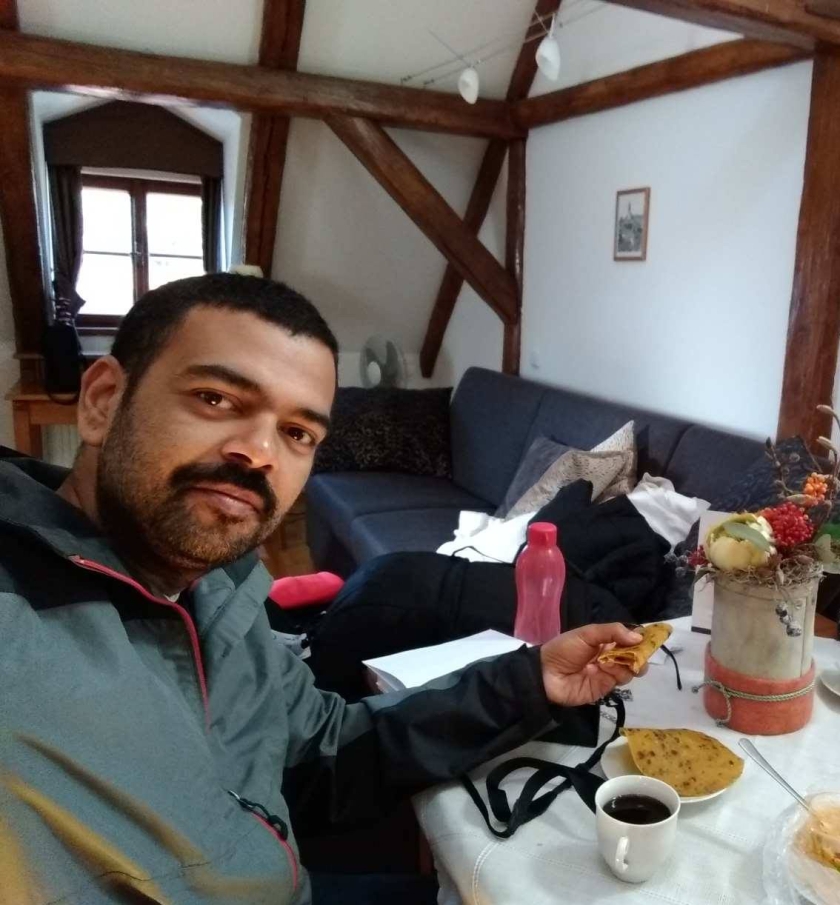 Then we rested our legs and caught a small nap before heading out again once the lights started to come on. First we went to a local favourite eatery called Hospoda Na Louzi ( Again a Rick Steves recommendation) for dinner. The restaurant was packed and we shared a table with a couple of locals. Dinner was shredded pork with dumplings for me and Cauliflower & Potato fritters with tartar sauce and a salad for the better half. You have to drink beer when in the Czech Republic and I enjoyed a stein of the local Dark wheat beer while the better half had a lemonade.

After satiating our tummies we walked back a short distance to the main square which was nearly empty and beautifully lit now.

We then started our walk towards the castle by the same way we had gone in the afternoon. But now it felt like a totally different route. In all the countries I have visited yet Italy has the most spectacularly lit old towns. While Krumlov isn’t as well lit as Siena or Rome, it is certainly better than Salzburg which was a damp squib at night.

We walked across the wooden bridge over the Vltava, with the inviting looking lit up castle looming spectacularly above.

The stairs up to the castle were beautifully lit up with typical yellow gas lights giving it a very different look from modern street lights. 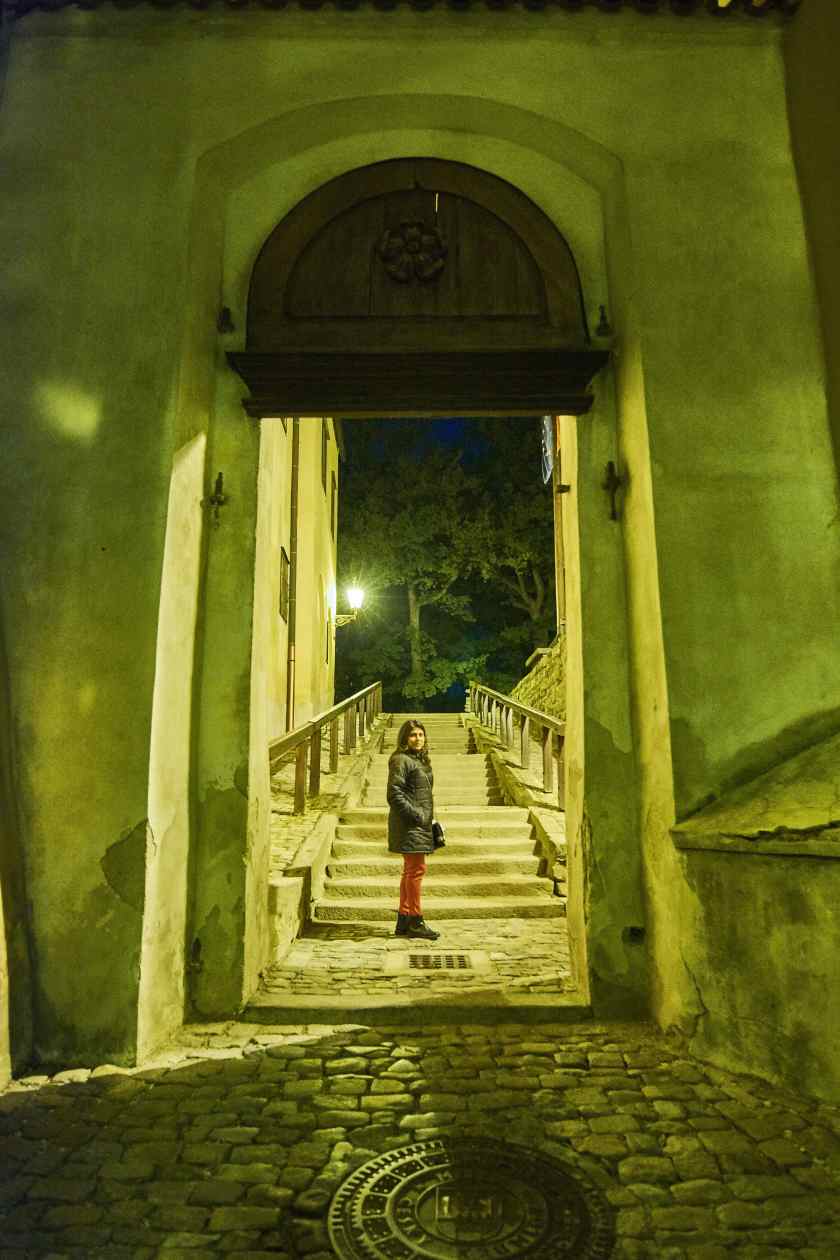 The bear pits which were mobbed with people searching for the two captive Brown bears in the day were now deserted. We had tried to see if the bears were out but they seemed to be holed up in their comfortable caves below. 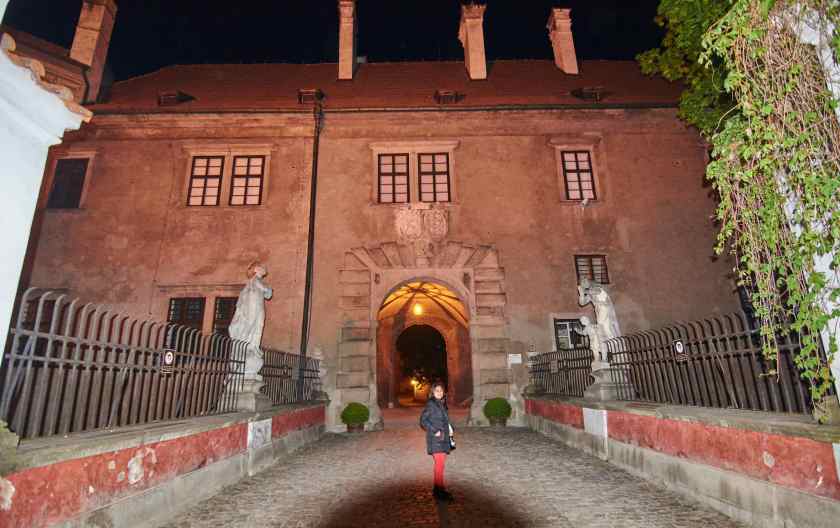 A well lit place has its own unique ambience. The lamp over the main door to the first courtyard which I had hardly paid any attention too in the day now provided a great photo opportunity with the shadows adding their design on the plain walls. 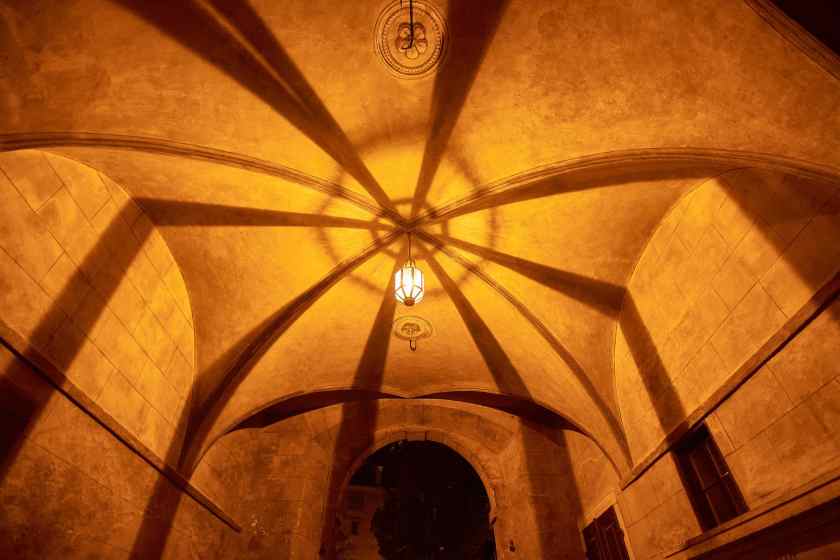 The courtyards were nearly deserted apart from a few couples like us enjoying the lit up wonderland. The Bell tower though closed for visits made for a pretty sight.

I had hardly stopped in the inner courtyards in the day because it was filled to the brim with tour groups waiting for their turn to go in. So we stopped now to appreciate the beauty  of these plain walls which are painted to make them look textured.

As I said before lights make everything pretty and even the short passageway to the bridge looked very different all lit up. 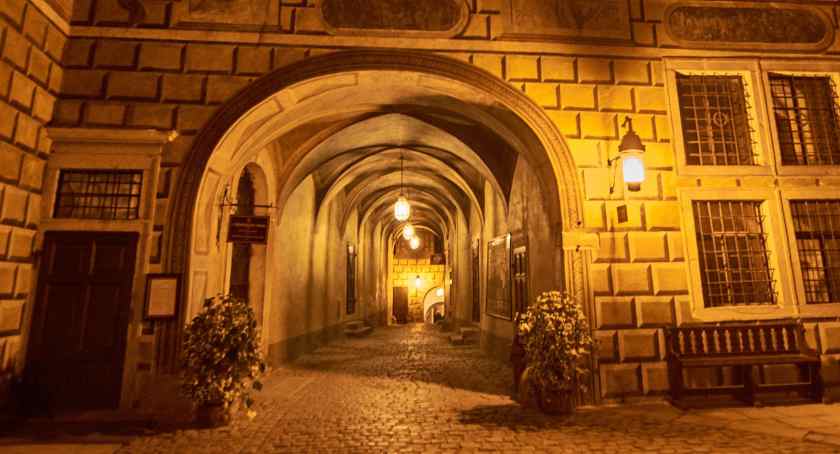 Next we came across the bridge that spans across the two hill that the castle complex stands on. The statues and the bridge itself looked very picturesque and photogenic. The statues details stood out in the spotlight making them come alive! Most importantly it was completely empty now whereas it was mobbed with people taking selfies in the day.

Sadly the balcony with the best view was locked and the view from the bridge though beautiful to the naked eyes was impossible to photograph. The lights which lit up the castle were giving too bright a glare to get good photos of the comparatively dimly lit town below.

So we turned back and enjoyed peaceful walk in the castle courtyards keeping our cameras away for the return journey. I couldn’t resist one more photo of the tower and the statue just outside the castle gates.

We got down to street level when the better half showed me a beautiful shop window showing glass articles of various shapes and sizes. Certainly worth ogling at and taking a few photos since we never buy souvenirs till the last day of the trip!

We then walked back to our hotel satisfied with the nights exploits and dropped off to a peaceful night’s sleep. But not before appreciating the beautiful view from our apartment window for a few minutes. Just the view was most certainly worth the price of the room itself!

For those who don’t read my posts regularly, this is why I don’t do day trips. Just a day trip from Prague would have robbed me the pleasure of walking these beautiful streets lit up and without the crowds of the day. It had already given me what I want when I visit beautiful towns like Cesky Krumlov, photos which at least show 10% of the actual beauty of the town itself.

It would give me more, I would walk the streets and visit the castle gardens early morning the next day and watch the sun rise over this wonder of a town. But that is topic for another post another time. Some people would say 3 posts for 1 measly little town, but Cesky Krumlov deserves it just for the varied nature of my experience at different times of the day.