This post is a continuation of a series documenting our travels to the North of Italy in May 2017. We had stayed in Milan for a day, and even though we had fun in the fashion capital  we had been waiting to move on to Lake Como and the mid lake town of Varenna.

We caught the train to Varenna from Milan Central station and settled in to enjoy the views from the train. Varenna is barely an hour and a half by train from Milan, and as soon as we left the gritty suburbs of Milan the lake started & views were beautiful. The lake Como is an inverted Y shaped lake and soon as our train started moving along the shores of the lake along one of the narrow inverted Y limbs. There were small towns dotting the lake shores with small stations which our train didn’t stop at. Soon we reached Varenna which is mid lake  and got down on a platform that was barely 3 feet wide! We crossed the tracks  carefully (There is no other way) and made a beeline for the lake shore where our B & B, the Villa Torretta was located.

After a short walk we reached the Villa and were warmly greeted by our hostess who promptly gave us our room even though it was not yet check in time. Our room was located on the second floor tower of the Villa with sweeping views over lake Como on 2 sides. I had been worried if this B&B, the most expensive one I had booked in my two trips to Italy would be worth it, but one look at the views from the room and all worries were forgotten!

As you can see in the above picture it was still sunny when we arrived, although the predictions weren’t so good for later in the day. So we just dumped our luggage got the camera out and left to make the most of the sun. The Villa Torretta is located right opposite the ferry dock of Varenna. The dock is connected to the main town by a beautiful pedestrian walkway called the Passarella. It is a narrow walkway overhanging the lake & lined by flowering plants on one side, an extremely romantic place to walk with the better half and we would spend a considerable amount of time on these few hundred metres in our two days here.

As we reached the main town and the teeny tiny harbour we realised that this was the ideal time to hike up to the Castle Vezio on the hill behind Varenna. If it rained later in the evening it would make the hike up the pebbly path very hazardous, especially with my dodgy knee. So we hurriedly saw the Church on the main square in Varenna and started on the hike up the hill.

As we started up the path it was initially a paved path which quickly transformed into a pebbly path with steep sections interspersed with less steep ones. There was no way I could have done this without incident if the path was wet. Houses soon gave way to relatively dense forest as we continued our climb up to the hill top.

I had got the 300mm for the hike ( Adding 2kg  on a steep hike is my idea of fun!) so I took some photos of the flowers and critters on the way up, which was a my way of catching my breath on this steep ascent.

After what seemed like an hour but was really less, we reached the town of Vezio and followed the signs of “Castello”, paid the entrance fees at the cafe / ticket office at the gate and entered the castle. The ruined castle doesn’t have much in terms of historic importance, but we were really here for 360 degree panoramas over the lake which were the reward of torturing our legs!!

We coaxed our tired legs one last time and climbed the watch tower of the castle for the highest possible view. The Alps to the North were clearly visible today and this is as close to the alps as we would get on this trip. We stayed on top of the tower for close to half an hour taking in the beauty of the lake that sprawled below us and thanking the weather gods for cooperating with us.

From this high vantage point we could see all the mid lake towns that we planned to visit tomorrow. We could see it starting to get cloudy and I wanted to get down before it rained. So reluctantly we got down from the tower and started on our way down.

Before we started our descent we visited the small church of Vezio. The Church , though small is more than sufficient for the town which has less than a hundred residents.

The narrow lanes of Vezio soon gave way to the now familiar rocky path down and we started our descent. Due to my dodgy knee I have more problems going down hill so paradoxically I descend slower than I ascend, but better slow than sorry! Thankfully we got down without any incident and both me and my knees were ecstatic!

We went back to the Villa to rest a bit before going out for dinner. But before we reached there I was distracted by two Mallards preening around on the main road in front of the dock as if they owned it. They were happy enough to pose for the 300mm too! I took a lot of photos before they got tired of me and moved on.

Just outside the villa was a beautiful stall selling lavender plants and products. While I had no interest in buying a plant the shop itself was so pretty that I couldn’t resist taking a photo or two.

By now it was very cloudy and threatening to rain any minute. We went inside the villa and decided to spend some time out enjoying the balcony and the external seating area before it started to rain.

Surely enough it started to drizzle and we went up to our room for some rain enforced rest time. The rain soon increased to a steady downpour and refused to stop.  As dinner time approached and the tummies started growling, we put on our rain gear, left the camera behind ( night photos would have to wait till tomorrow ) and went to the Ristorante del Sole on the main square for dinner.  ( A Rick Steves recommendation again)

I have never had a bad meal in Italy and today wouldn’t change that.  The Ristorante del Sole was warm and inviting in the cold rain. The better half ordered a margherita Pizza, I a pasta with lake fish and a creme caramel to finish off the meal. All the items were delicious and were polished off in no time. 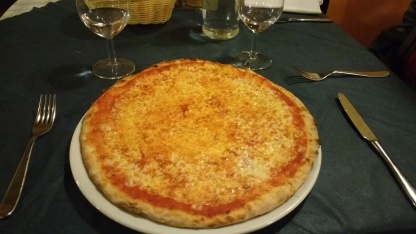 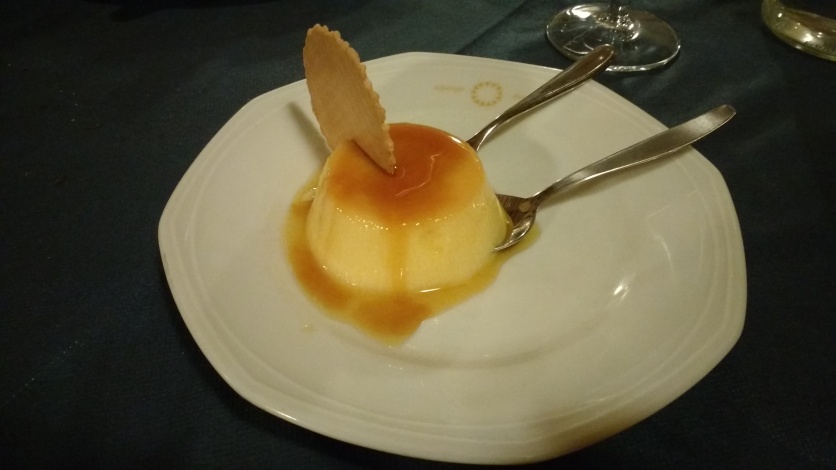 We finished our dinner but the rains were not done yet. It continued to pour as we rushed along the passarella (unthinkable if it wasn’t raining!),reached our bed and  fell asleep. I hoped that the clouds would empty out in the night and spare us the next morning. We had a busy day planned visiting multiple towns on the lake and we needed the weather to cooperate. But it had been a great first day in the lake district of Italy.

The mid lake towns of Bellagio, Lenno and the Villa Carlotta with its sprawling gardens waited on the next day. But that is story for another post, another day.