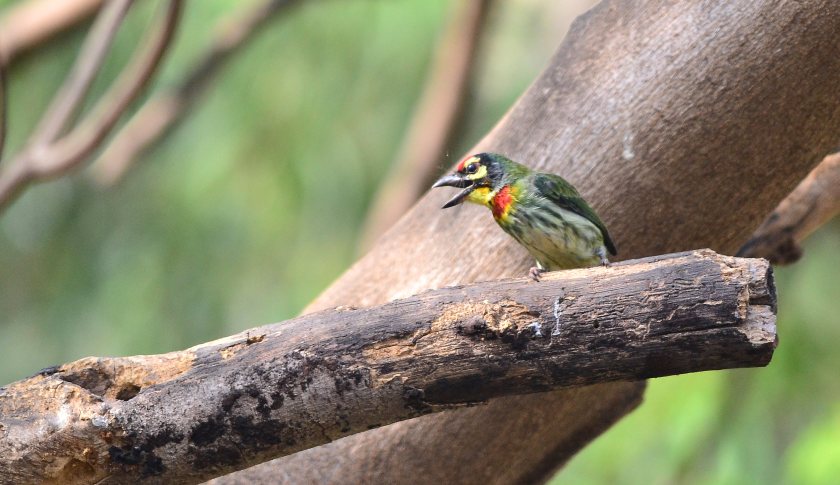 At the outset I have to say that this is not a travel post. In fact it is the exact opposite of a travel post as it documents my encounters with the feathered kind at my home in Mumbai since my return to the city in 2013.

When I returned to Mumbai in 2013 after 2 years of a Government job in Kolkata, I decided to try my hand at private practice as a freelance Plastic Surgeon. So invariably I had a lot of time on my hands in the initial days of practice. I still have time for my hobbies now, but not as much as those initial days when I was literally searching for things to pass time! I used to take my cat up to the terrace to play and I realised that there were a lot of birds in my neck of town that I had never noticed upto now. (Maybe because I was not interested in them in my younger days) So I started taking my camera up to the terrace with me and it helped me pass time constructively and practise my bird photography without spending any money.

Everyone thinks that the only birds in Mumbai are the aggressive crows and the irritating pigeons (Even the sparrows seemed to have disappeared from most parts of town). Thankfully I live in a relatively green colony in the western suburbs where I wake up to the sounds of birds chirping outside my window even today. Today I can recognise most birds in the region by their call and predict their behaviour to get better photos. This has helped me a lot when I go on my birding trips for getting better photos.

Whenever I went to the terrace of my building the first birds to greet me with their variety of shrieks were the common mynas. The pair which nests in my vicinity are super aggressive, especially towards my cat. Whenever they have young ones in their nest they will scream, screech and dive aggressively towards my poor cat. My tom cat who hasn’t ever tried catching baby birds ever before has no idea what he has done to invite their ire. In fact at one point of time they terrorised him to such a degree that he ran downstairs at their first screech and literally had to be carried up. They provide easy subjects for my camera as they allow you to get very close to them before they fly away screening at the top of their voice.

Then there is the flock of sparrows who are ever so scared of anything and everything.  The sparrow has disappeared from most cities due to lack of nesting places they continue to have a presence in our locality due to the multiple bird houses and feeders placed by people in the colony. One large flock has constant presence around our house but unlike the mynas they are deathly scared of the cat and disappear soon after he makes his appearance on the terrace. Their constant chirping, irritating to some is like music to my years and its a pleasure watching them take dirt baths in the neighbouring garden. And I hope they can regain their numbers and chirp all over the city like they used to a few years ago.

The eagle like birds you see soaring above in the Mumbai skies especially near meat shops and garbage dumps are the Black Kites. They are waiting for some juicy scraps or a rat feeding on the scraps (Both of the scenarios suits them just fine!) so that they can swoop down and carry off their lunch in one smooth manoeuvre that show pilots would be jealous of. They usually perch on the highest available location in the vicinity so that they can scan the area for the next meal. One such location is on top of the numerous mobile towers on the next building. That gives the best opportunity to take some good photos of the bird staring right into my camera.

The bird you can always hear but rarely see is the Indian Koel. But once you spot them they are very easy to track and photograph. The male is dark black with crimson bloodshot eyes and the female is brown with white spots on its back and a striped belly. They are beautiful birds and one of my favourite subjects due to the intensity in their eyes. They also allow you to get  quite close if you don’t make any sudden movements as they are overconfident of their camouflage abilities in the foliage. They are usually hiding in the foliage to get away from the crows who will chase a koel away the moment they see one and for good reason. They lay their eggs in the nests of crows after displacing one of the crows own eggs and trick the crows into raising their young. How convenient!

Another species of aggressive towards my cat bird is the Red vented Bulbul.These are again very common birds found all over the country. We have a resident pair in the vicinity who will flutter around the trees at dusk in search of food. This small crested bird with a black head and a brown body get their name from a patch of red feathers at its posterior. Initially I had no idea why they were called red vented when I couldn’t see any red. It was only when they mooned me that I realised that they were aptly named. They are very curious birds and have frequently flown too close to be photographed by my 300mm.

As long as we are speaking of aggressive towards cats birds no one can beat the White browed fan tail flycatcher. This very small bird with a huge folding fan for a tail will fly right into my cats face to try and scare him off. They flitter about from branch to branch ingesting all the critters in the trees and also on the ground. I have spent a few hours with one such bird in the compound of the building, waiting for him to sit still for a good photo. As I spent more time with him the guy actually got comfortable and I got a few decent photos.

No birds can make as much of racket as a flock of Parakeets in full flow. The ones which have made the eucalyptus tree in the garden their hideout can wake you up from deep sleep with the loudest of shrieks. They are well camouflaged with their bright green feathers. In our childhood we had a guava tree in our building which used to be the snacking place for these screaming banshees and we could see them at very close quarters. Sadly that tree no longer exists and the parakeets have moved their snack time to the mango trees in the neighbouring building so I have to be satisfied with distant shots of these birds hanging out on the overhead wires.

There are some birds that are so camera shy that they never want their photo taken. two such birds are the greater coucal and the tailor bird. With great effort I have managed to strike off the tailor bird from that list. I have stalked that bird for days together but it just doesn’t sit still for long enough. The few times when it seems to stop to catch its breath its deep inside the tree. But patience has paid off eventually and I have some decent photos of this bird. The greater coucal still manages to evade my 300mm. Although I see the bird with my eyes quite frequently, it somehow manages to make an appearance when I don’t have the camera in hand.

The official bird of the city, the Coppersmith Barbet with its characteristic blunt kuk -kuk call and colourful front feathers has quite a significant presence in my locality. I have seen upto 8 of this birds flying around the gulmohar tree next to my house in search of insects and making their nests in the decayed parts of the branches. These birds are one of my favourites to photograph. It’s surprising that I had never noticed these colourful birds ever in my childhood. Nowadays every evening when I go upto the terrace I see a pair on the wire overhead and it’s fun to watch them kuk away to glory even though I am too tired to take photos on most days.

The Golden Oriole is a strikingly beautiful bird with the male having bright yellow feathers and a black patch over the eye. The female although less striking than the male is beautiful too. These birds are too beautiful not to notice and I knew of their presence since childhood even though I didn’t have the gear to take decent photos of them. These birds are very shy and fly deep into the branches at the first sight of a human in close vicinity. So once I sight a bird I try to stay out of sight till it comes out and perches on a branch where its visible in its full golden glory before trying to take as many photos as possible before it flies off. Every time I get a good photo of this bird it makes not just my day but it makes my entire week.

Last but not the least are the purple rumped sun birds. These small colourful birds found flitting from flower to flower sipping nectar with their long curved beaks have become my next door neighbours. One pair had even nested in a low bush in our compound and given me some photo opportunities that I may never get again. Initially I used to struggle to photograph these birds because of their small size and speed. Then I started realising the pattern in which they move and anticipating the next flower they will move to has helped me capture these birds with much more accuracy. Every morning at a fixed time a pair will fly into the tree next to my bedroom window and fly from flower to flower. It has become such a timed ritual that nowadays I always have my SLR with the 300mm attached on my bed to greet my breakfast companions.

As you may have noticed I have left out the crows since they drive away most other birds and I hate them like the plague. The pigeons I don’t hate as much , in fact they were the first subjects when I got the 300mm but I won’t waste any more words or photos on them unless they are doing something special.

I can go on and on about these birds (but I won’t!) and I consider myself lucky enough to have such diversity of birds around the house to practice my bird photography whenever I have free time. Most posts you right for the readers but some posts you write for yourself. This is one for me ( and for Pukku!)