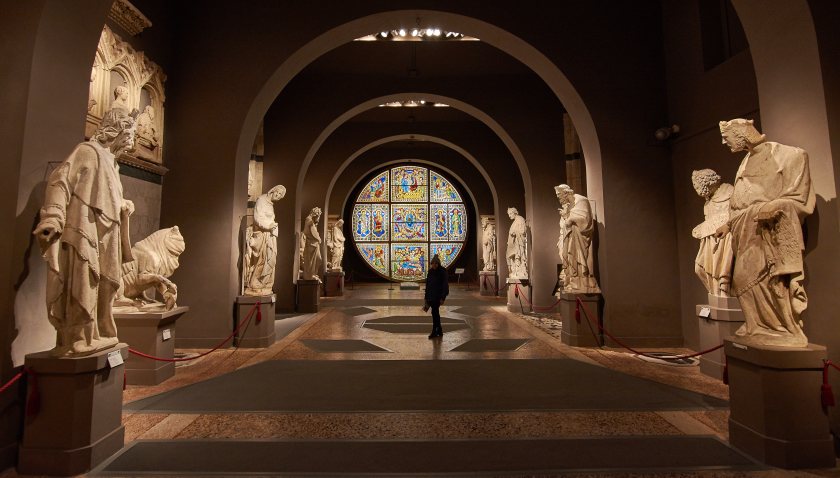 This post is a part of a series documenting my vacation in Italy. This is about the fabulous Duomo complex in the Tuscan hill town of Siena. As readers of my previous posts know, Siena was my favourite stop in my Italian vacation. So I decided to do one more post about this town before I move southwards to Orvieto and Rome.

The Siena Duomo complex consists of the Cathedral itself, the Baptistery, the Crypt and the Duomo museum with the Facciatone viewing gallery. The wonderful thing about this complex is that you can buy a Opa Si pass to all the sights, which is valid 3 days from the date of first visit. So it means you can avoid rushing all the sights in one packed day and split them over 2-3 days while you see other non religious sights or do day trips to the nearby towns while being based in Siena.

We did the Cathedral itself on day 1, the baptistery and crypt on a gloomy rainy day 2 ( Both are indoor dark sights anyway ) leaving the museum with the Facciatone for a sunny clear day 3,  which was ideal for us.

I have described the cathedral in my previous Siena post. (Siena – The first day in the Medieval town of my dreams!) It is a huge structure filled with art. It also includes the excellent Piccolomini Library, which is a photographer’s delight and worth the money of the pass just by itself. My only regret was that the excellent & detailed floor mosaics were being renovated and I missed those in this trip. ( But it gives me a reason to go to Siena again someday!!)

On day 2 based in Siena we went to San Gimignano on what was a wet, rainy day. When we returned it was still cold, grey and dreary. So instead of doing the museum and the viewing gallery, we decided to do the baptistery and the crypt. It was a gamble hoping that the weather would be better the next day. Unlike the Florence Duomo, the lack of space and the hilly terrain meant that the Baptistery of San Giovanni was located right under the Cathedral, with stairs leading down from the incomplete part to the Baptistery.

The interior is dominated by the octagonal baptismal fountain with bronze panels and statues depicting the life of John the Baptist ( Obvious choice!!) by Donatello, Ghiberti and the other renaissance masters with walls and roof filled with frescoes. The subject matter is always the same but the treatment is always different and the effect always breath taking!

The frescoes are recently been freshened up and are bright as they were when painted ,albeit a bit incomplete. It is a small but beautifully decorated place, as space is at a premium in Siena.

After coming out from the baptistery we searched for the Crypt but were unable to find it. We asked the friendly lady at the museum entry who pointed us the right way. It was a small door in the middle  of the stair case leading to the baptistery, no wonder we missed it!

The crypt was recently excavated after lying unnoticed for 700 years of being used as a store room in earlier times. It is a rectangular room with frescoes dating to the 13th century depicting the life and crucifixion of Christ ( What else do you except?) The crypt was never used for burial as it was used up to build the Cathedral choir and the baptistery.

The remnants of the old cathedral pillar bases, old church articles and the frescoes apart from the lack of tourists make it an interesting experience. We spent a short time at the old choir remnants and left this peaceful and historic part of the complex.

The last part of our Opa Si pass was used in the Duomo Museum and Facciatone viewing gallery on a beautiful sunny third morning.  It was our 6th wedding anniversary so I thanked God for the glorious weather. We lined up before opening time so that we had most of the museum to ourselves for a good 15 -20 minutes (Advantage of travelling in off season!). It has the Madonna and child by Donatello, Duccio’s grand original stained glass window which can be viewed up close, unlike most windows which are high up in the church facade and Duccio’s Maesta original, a group of paintings which line the altar of the church. It also has a row of original statues from the bell tower which are lined up as if giving a guard of honour to the Big stained glass window at one end of the room & Donatello’s Madonna & Bambino at the other end.( Smart arrangement!)

It is a small and interesting collection unlike the bigger museums where you are too tired when you reached the end. We passed through a room with the original precious items from the baptistery before we reached the steps to the Facciatone viewing gallery. There was a surly man at the gate who said “Wait, Line, 10 minutes”. So we waited with a few other tourists till the same guy religiously counted the people coming out. Only when he was satisfied we were allowed to ascend the tight winding staircase leading to the top of the incomplete cathedral wall that is now the Facciatone  viewing gallery.

As we reached what we thought was the highest view point it was underwhelming. It had good views of the Cathedral but was nowhere as high as the Torre Mangia. So we took photos of the cathedral till almost everyone in our lot of tourists left. Then we realised that there was another staircase leading to a level up that we had missed. So belatedly we rushed up the last lot ( rather, we gingerly climbed up ) of spiral stairs and got what we had come for, views over the city hall and Il Campo from a different angle.

It was nice and sunny and we overstayed our allotted time, till I assume the guy at the gate got tired of waiting for us and send the next lot. We sheepishly waited for all of them to ascend before we made our way down and out of the gallery.

It had been a great start to our anniversary and we left Siena for Orvieto after collecting our luggage and saying our goodbyes to our superb B&B owners. (I hope its not goodbye because I want to go back some day!)

As our taxi went down the winding streets of Siena down to the train station at the foot of the hills we looked back at one of the most underrated destinations in Italy. (I only came to know about its existence when I started researching my Italy trip!) We got into our train bound southwards to the Umbrian hill town of Orvieto where we would spend the rest of our anniversary.

But that is topic for another post, another time.