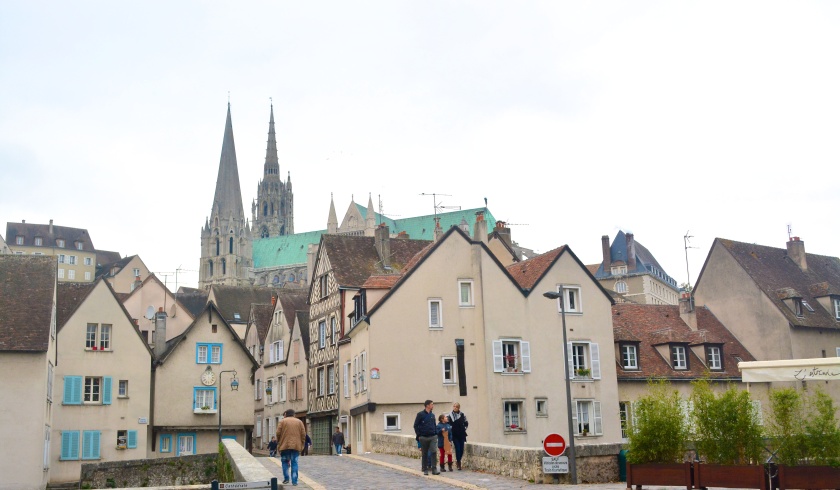 I have been interested in Cathedrals and their architecture ever since I read Ken Follett’s books on the subject. So when I planned a trip to  France I wanted to visit one of the smaller cathedral towns in the country.

There are a lot of famous Cathedral towns in France to choose from ( Reims, Strasbourg , Chartres being the most famous ones) and each cathedral looks beautiful in the photos.  I chose Chartres as it is close to Paris and could be combined with a morning in Versailles ( Post for another day)  for a sightseeing packed day. It was possible to do this provided we stayed over in Chartres, which was exactly what I wanted to do.

There are many advantages of staying overnight in a small town. You get to spend time to experience the place when most of the day trippers are back to the City, you get to save a considerable amount of money on the hotel prices. With Chartres, the bonus was that you get to see the Cathedral lit up after sunset, which is a magnificent sight. It was sad that we missed the Chartres Light show which lights up the cathedral and parts of old town in different colours and patterns  ended a week before we entered the country in October.

We reached Chartres station by a one hour train journey from Versailles, and as you leave the station you can see the Cathedral tower over everything else and you don’t need directions to reach it, just follow your eye. Before we started to explore the cathedral, we found a small cafe serving crepes and coffee just before the cathedral square and loaded up on coffee and chocolate.

The Cathedral is a 11th century structure with major modifications made in the 12th century when it caught fire and most of it burned down. The towers are unequal, i.e the newer tower was built taller than the older tower and gives it a unique appearance. The Cathedral and its glasswork were spared the bombs of World war II ( Hallelujah!!) and is a great example of pure Gothic Architecture.

After photographing the exterior we proceeded to see the famous stained glass windows of the Cathedral. There are 3 huge rose windows at the 3 ends each depicting different scenes of the bible and tall ones lining the walls. Each one is an explosion of colours and the details of each window, the expressions of people, the creases in their robes are really something else.

There is also a famous piece of the window which survived the blaze in the 11th century and was refitted into the new cathedral. It has Mary in a blue robe,(The Blue Virgin) the blue colour is called Chartres blue and is different from any other shade of blue I have seen.

The Cathedral is undergoing major restoration work at the present and looking at the part which has already been rejuvenated I would like to be back when all the work is over. It is that good!!. After looking around taking lots of photos of the windows and the fine detailed sculptures of the Choir Screen we turned our attention to the North tower.

You can climb the North tower for a price ( 5 euros) and it is a steep climb up 400 stairs in a dimly lit tower. If you have the knees for it, not to be missed. The views from the top are superb and we got great photos of the flying buttresses ( external supports of the walls to support the stone roof which makes the huge windows possible- for those who haven’t read the Follett Novels), the gargoyles ( fancy drain pipes in reality and not as detailed as their Parisien cousins) and the Chartres town. It is a much more personal experience than the tower climb at Notre Dame in Paris and we were the only ones on top. After an hour on top we descended and went to our hotel.

The hotel booked was the Hotellerie St Yves which is a old monastery converted into a budget hotel. It was literally a stones throw from the cathedral in old town, offered all the facilities and was 1/3 the price of our Paris hotel. (most important for our budget) The receptionist was helpful and suggested a few good restaurants around, gave us a map of the town and collected the money for our room and breakfast in advance as we would be leaving before the reception opened in the morning. The rooms are basic with comfortable beds and small linoleum floored bathrooms, great for the price paid!!

After freshening up we went for a walk around the old town with its canals, half timbered houses and more churches. It is beautiful and very peaceful, a stark difference from the hustle bustle of the cities. I found a Yves Thuries Choclaterie, supposedly the best chocolate in France ( I can confirm that now!!) and bought a lot of chocolates to be enjoyed back home.

As the sun went down we returned back to the Cathedral for photos of the lit up cathedral and a delicious dinner and wine and the recommended Cafe Serpente close to the cathedral. As it was cold we sat inside the cafe, but had it been warmer, a meal with the view of the lit cathedral would have been great.

As we returned to the hotel for the night’s sleep I was happy I did this as it is not in the regular tourist trail followed by most people visiting the region.

Early morning we had a buffet breakfast at the hotel and returned to Paris for our last day in the France. As we left Chartres I took a final shot of the town and the cathedral in the soft morning light and left town with pleasant memories for a lifetime.