Living and working in Mumbai can be a grind and after a few weeks of weaving in traffic for hours and operating on patients I get a bit angsty.  So the opportunity to go on a photography trip is always a welcome break from the schedule and a great way to soothe the nerves.

Fortunately despite Mumbai being a big concrete jungle it still has a big green lung right in its centre known as the Sanjay Gandhi National Park. The main part of the park with its entrance in Borivali is usually a zoo on weekends when crowds of picnickers descend on it and make it an unpleasant prospect for nature / macro photography. So when my friend suggested for the first time a year ago that we go to the Nagla block of the national park, which is farther away and has almost no crowds except for nature enthusiasts. (both real and pseudo, more on that later) I jumped at the opportunity and we have been there twice after that.

The best time to visit the Nagla trail is at the end of the monsoons when the trail is green and crawling with interesting things to train the lens on. The trail has never disappointed me & I always come away with some photos that I will remember for a long time.

A disclaimer here, I am not an expert on insects  or a macro photography enthusiast (birds are more my thing) but the enthusiasm of my friend for the same carries me along. It also helps that my 300mm prime can take decent macro photos without me having to get too close to the creepy crawlies, which is not my cup of tea!

We leave early morning and drive to the start of the trail, which has a ticket office which is never open at the time we are going in. ( But we pay our dues on the way out, like the dutiful citizens that we are!) The trail is a narrow path amidst the forest which fortunately is rocky and not muddy at most places, though it can get quite slippery at places. There is nothing picturesque about it but the silence of the forest broken only by the insect noises and bird calls is an experience in itself. Step in a 100 metres and you feel as if you have left the bustling city far behind.

The forest itself is crawling with insects, especially after the monsoons when the air is full of butterflies and moths, flowering bushes attracting pollinators of all shapes, colours and sizes & and make it a joy for macro photography.  You can hear a lot of bird calls but see very few birds and the forest itself is so dense that the light is not conducive for bird photography, so I have stopped trying. The trail itself is 3km long and you can easily do it in 2 hours, but we stop every few metres whenever a new subject is seen and easily spend 4-5 hours on the trail, only returning when the tummy starts to rumble.

We always carry water since we are on the trail for prolonged periods and wear full sleeves shirts, jeans as protection against mosquitoes and the plants which cause skin irritation ( they are there in plenty!) and good hiking shoes since the trail can get slippery and we treasure our bones and our camera equally. We always seem to forget the mosquito repellent cream and regret it, as mosquitoes are part and parcel of any tropical forest and we end up with a lot of bite marks as a prize for our efforts.

Mostly we are the only ones in a section of the trail at any given time or  rarely there are other groups of photographers who silently go about their job. On rarer occasions there are loud raucous groups who have no interest in anything to do with nature and as soon as we hear such a group we know that we either have to race ahead so that they don’t scare stuff off or wait for them to pass sufficiently into the distance so that we and the forest can get back to our work. Every time I go I pray that there is no such group on the trail!

I am not going to try to name the insects and in the process get most wrong! So please forgive my ignorance of the same.

Bees are one of my favourite subjects since it’s a challenge to photograph them as they fly from one flower to another having their meal. Fortunately they have cooperated with me and my 300mm and given me some decent photos.

Butterflies and moths are much easier to photograph with my long 300mm lens since they are jittery creatures and don’t allow you to get close enough to use a macro lens. 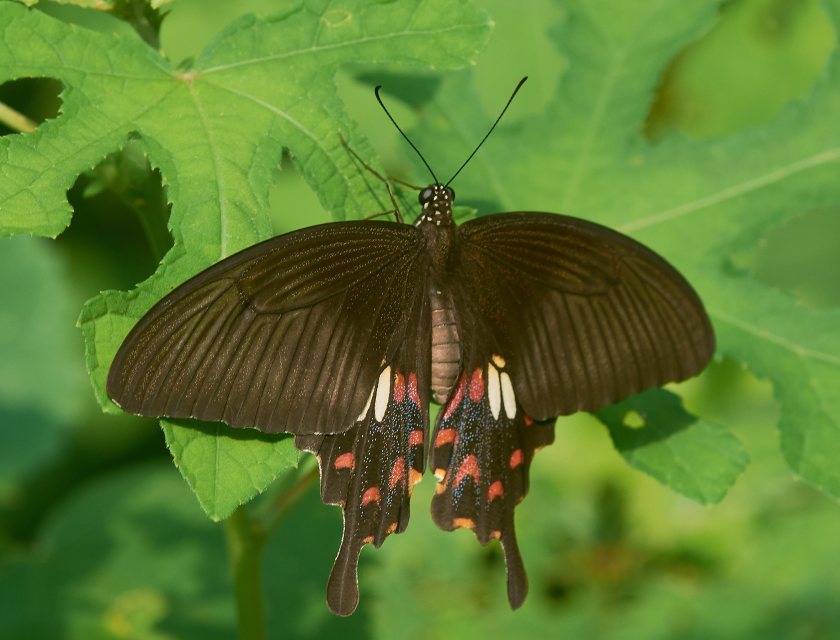 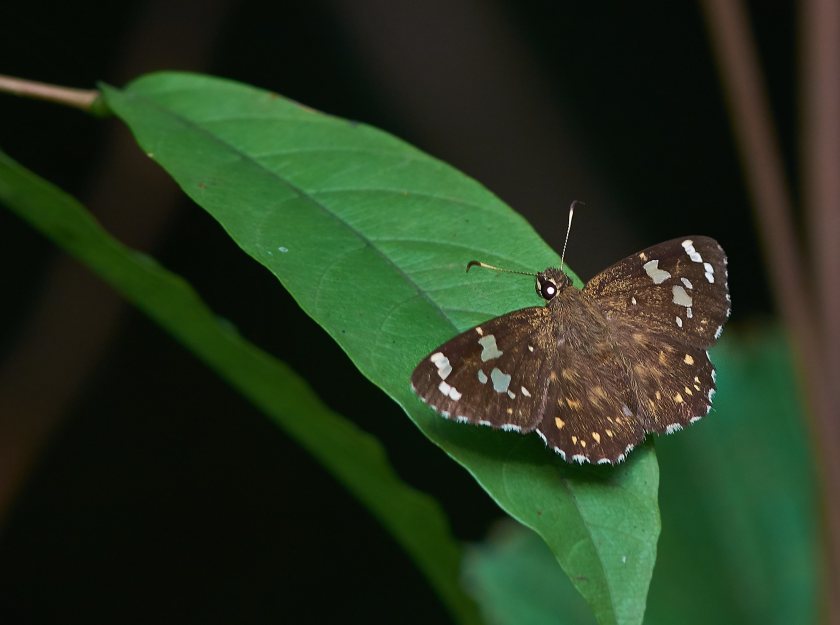 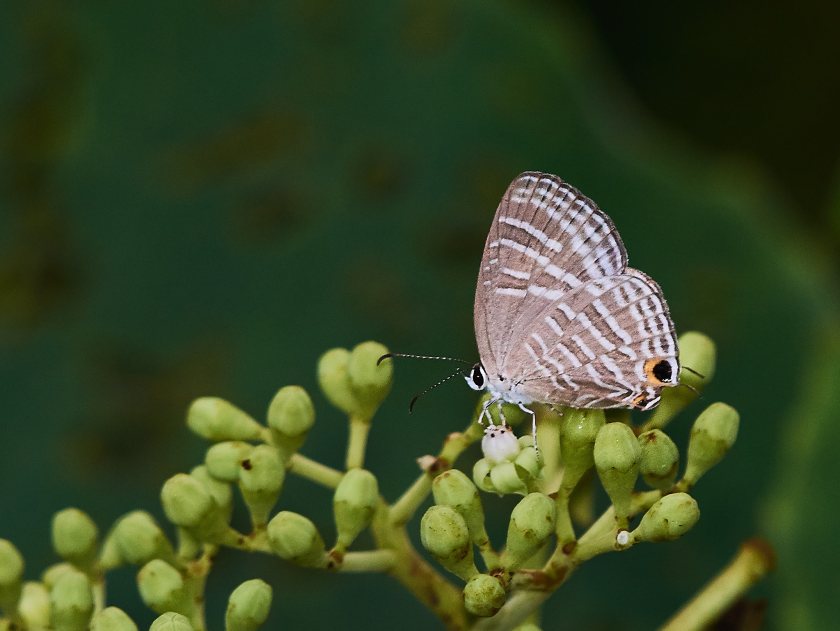 Caterpillars rummage through the leaves and make a pretty picture. My friend always points out that with a macro lens you can get all of the caterpillar in focus using a high aperture value and a ring flash with diffuser ( My friend carries around a lot of equipment on this trail and I have often told him that he needs to hire a sherpa if he intends to carry so much!). I don’t own a macro lens so I make do with what I have and try to get as much in focus as I can! 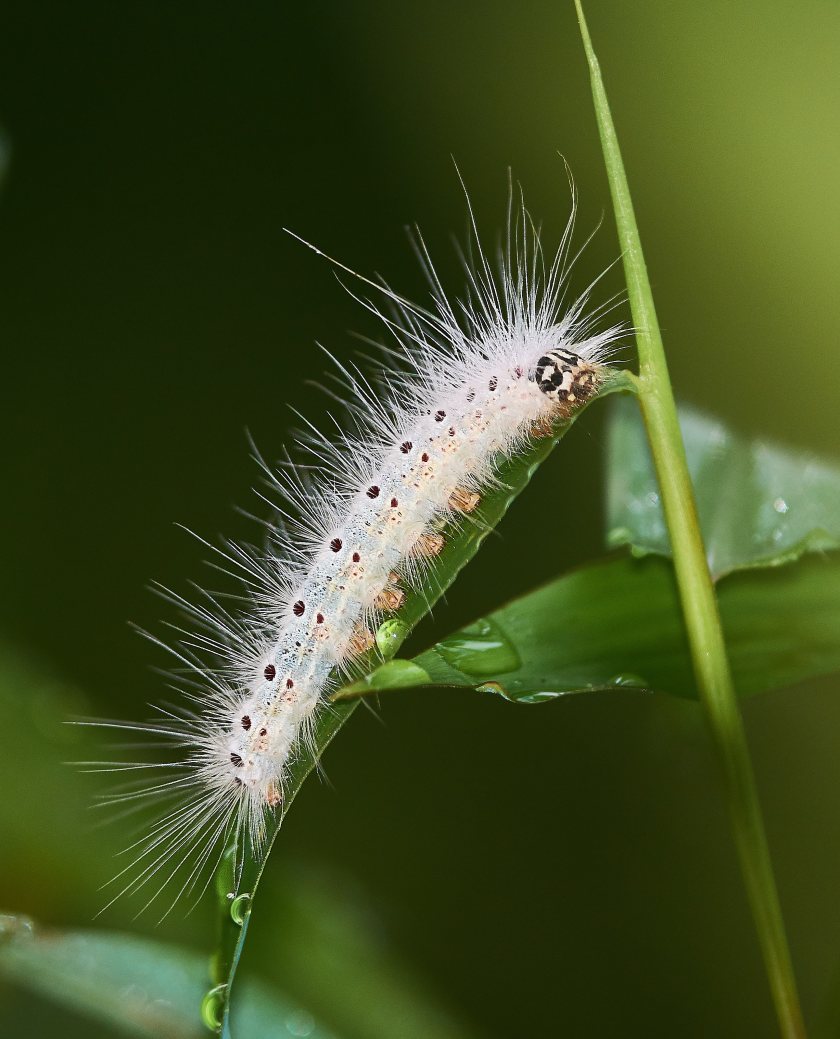 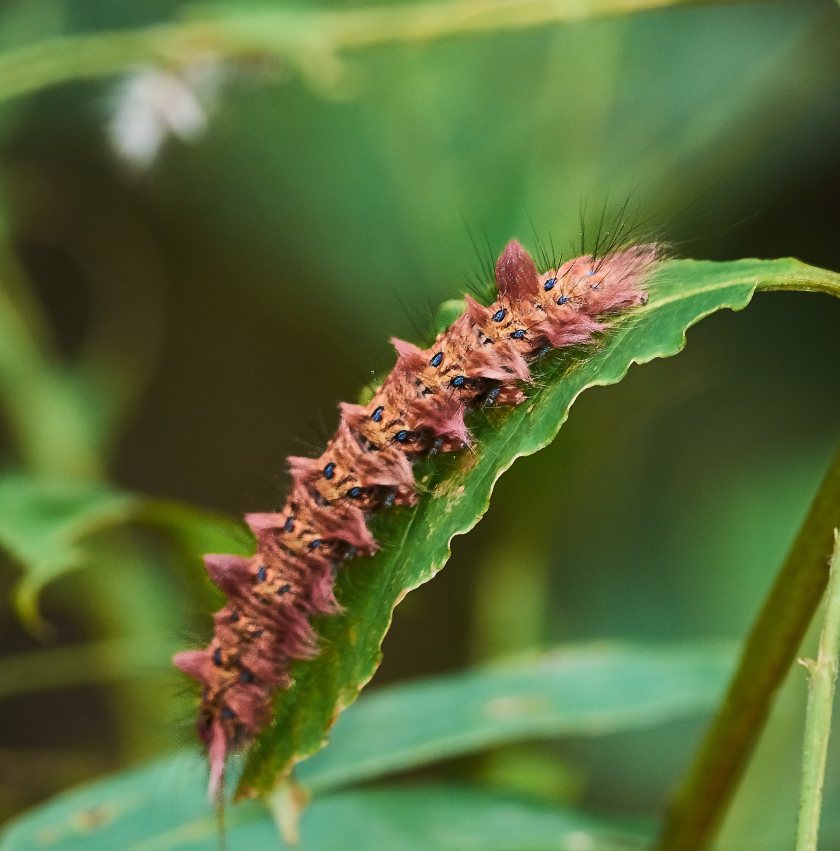 Small colourful and oddly shaped beetles are scurrying around but when they settle down they don’t move. That makes them great subjects especially for my friend who likes to get really close to get their details in their full glory, while I am happy to shoot from a distance (I have to as the 300mm won’t focus from very close, thankfully!). 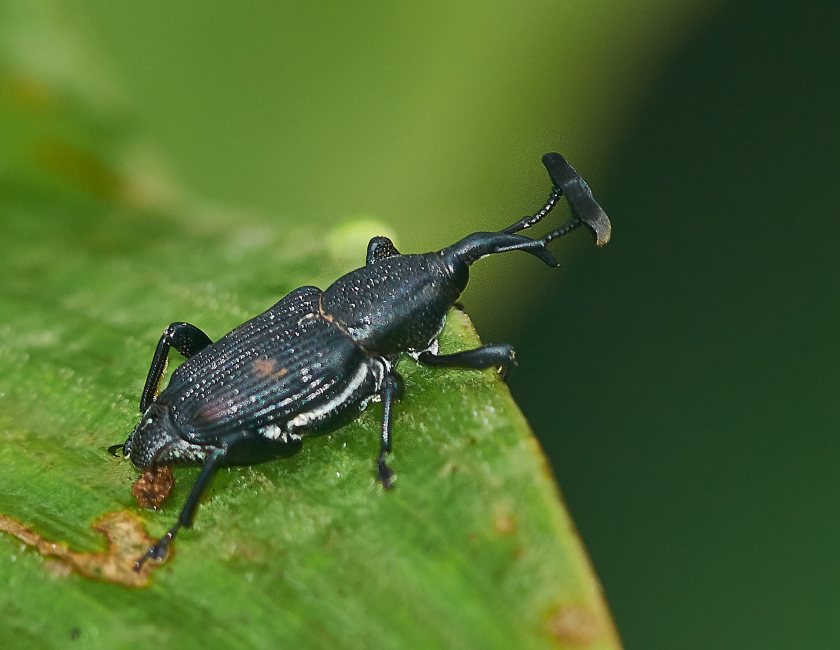 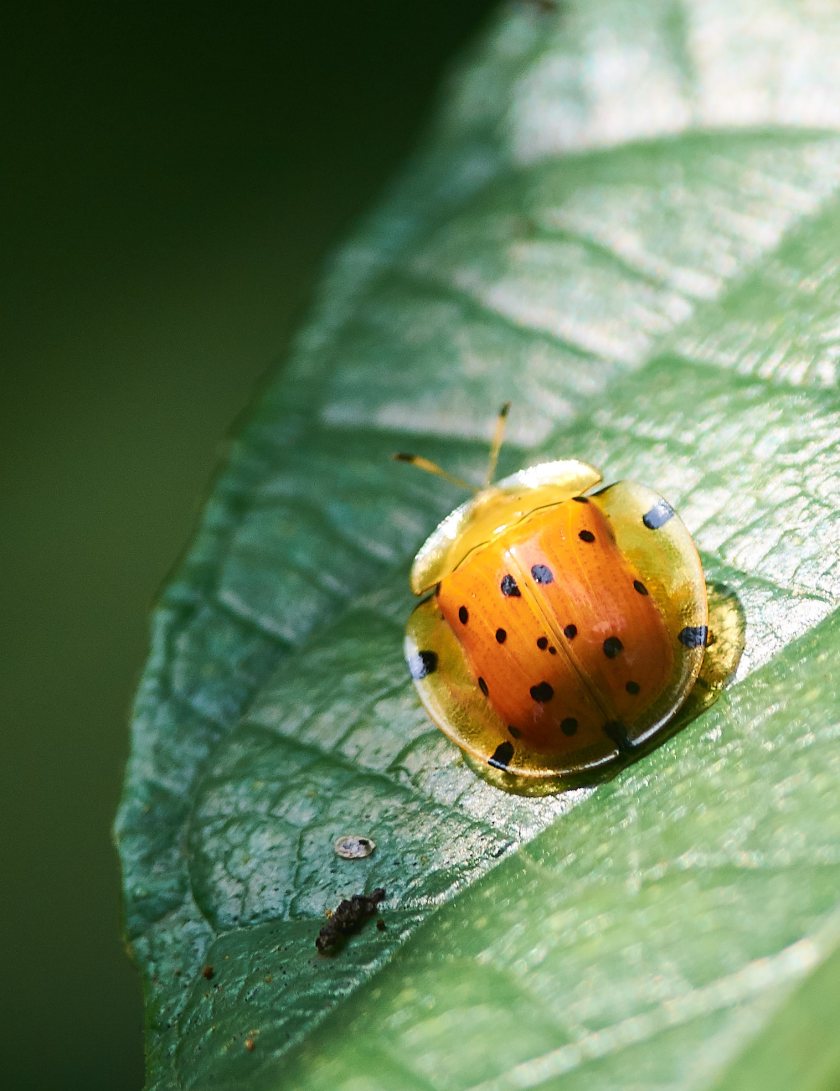 Then there are the vast array of flies the exact names of most of which I have no idea but they are just so beautiful to photograph that they can’t be ignored.

Then there are spiders ranging from those a cm in size to those of the size of a human hand. The small ones are particularly difficult to photograph and maybe it will require a few more trips before I get the hang of getting them in my frame to my satisfaction.

There are also dragonflies and their cousins of varied colours flitting around in the search of their next meal. While the flies themselves with their delicately patterned wings and technicolour bodies are a treat to photograph, this time I was lucky enough to photograph a dragonfly chewing on a juicy mosquito!!

We have always seen crabs scurrying away and they have always been too fast for the camera. Except for one who scurried part of the way and then was curious about us for a second or two giving me enough time for a quick photo.

Reaching the trail early has also meant that we are usually the first ones in and the calotes ( beautiful little lizard) are still peacefully resting in the open. We usually manage a few quick shots before they go scurrying off into the jungle. 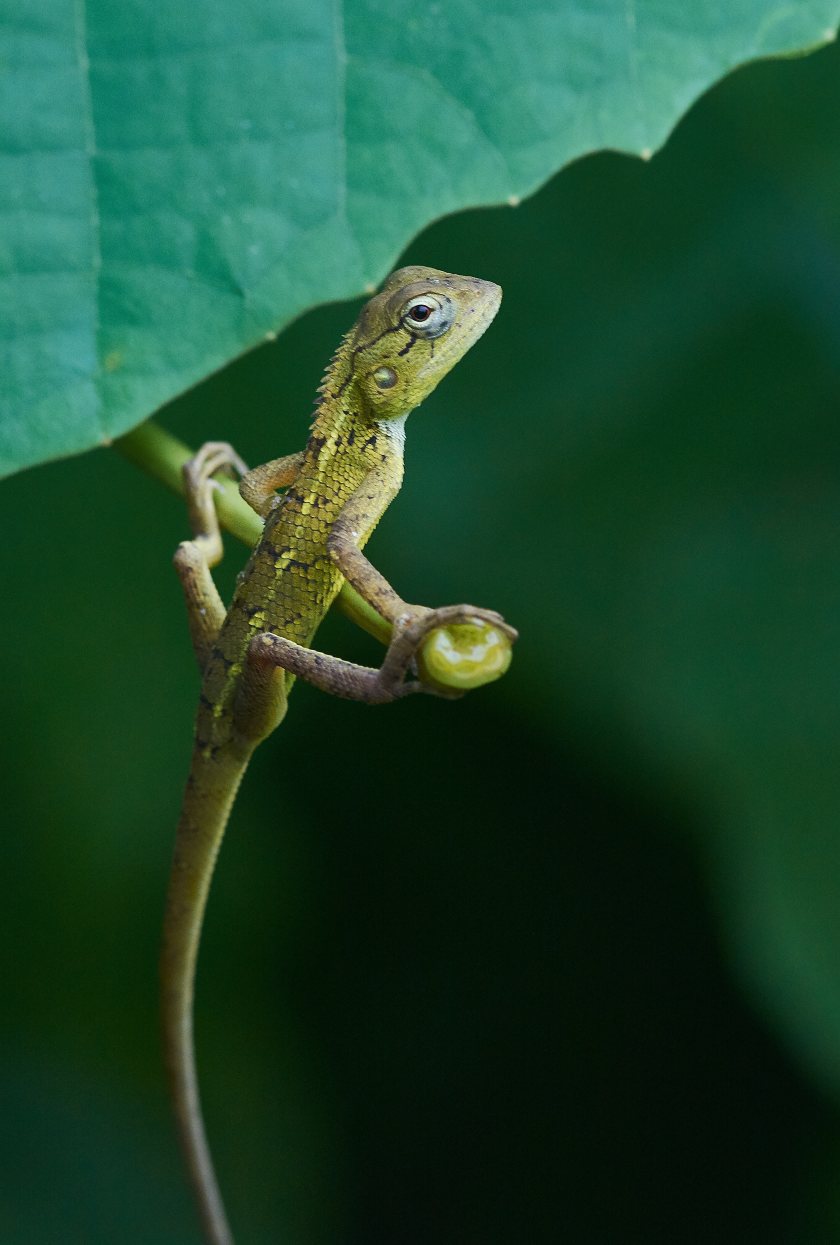 There are some beautifully camouflaged insects which are very difficult to spot. These are the ones which we spend the most time with because we never know when we might spot another one. 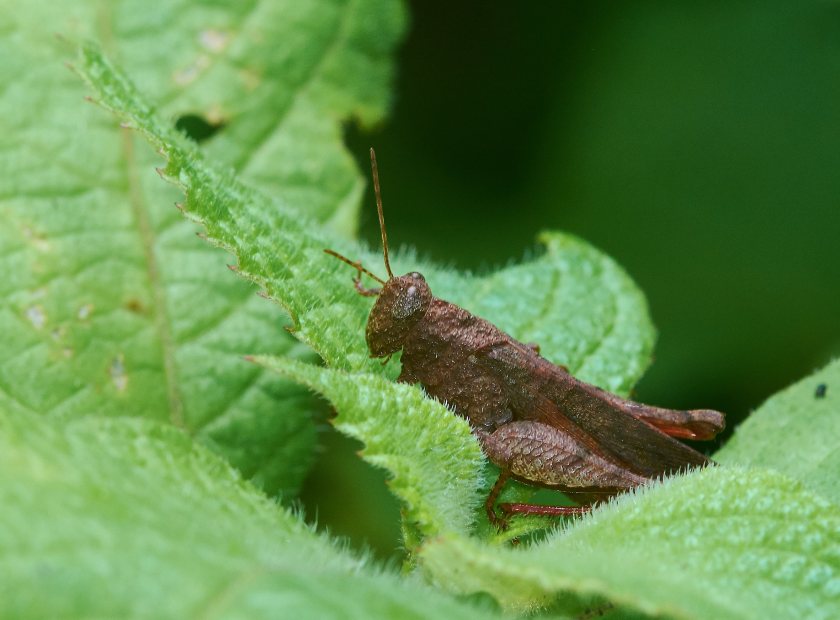 This is just a small sample of the vast array of creatures on the Nagla trail that I have managed to get half decent images of. Every time I go I find something new and for the same reason I hope to return to the trail after every monsoon and enjoy myself ( Hopefully it stays as secluded and unpopular with the public !)